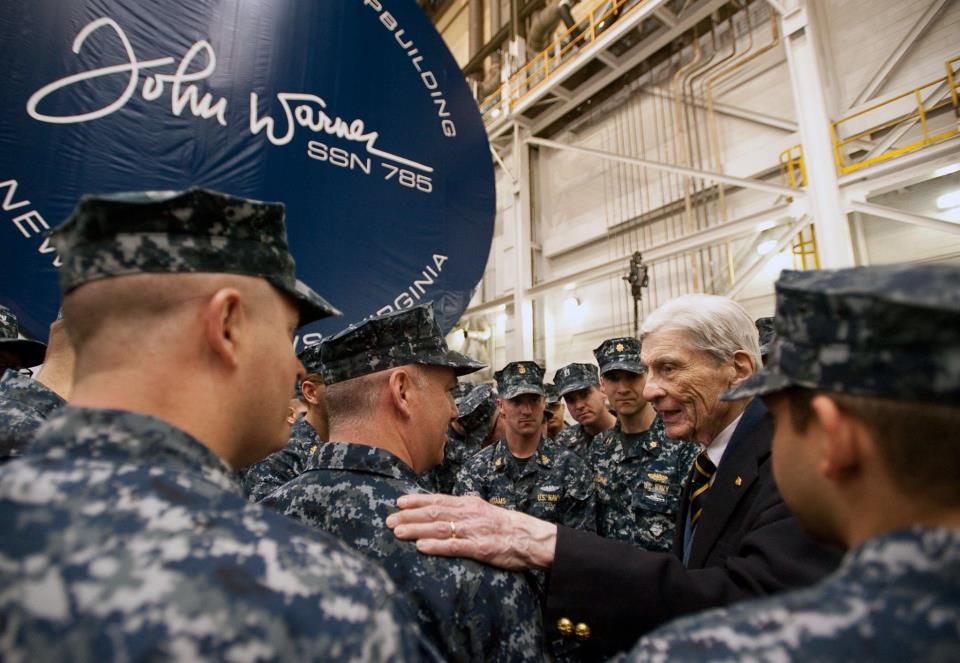 Newport News, Va. – Newport News Shipbuilding held a keel-laying ceremony Saturday to mark the start of construction on the Virginia-class submarine USS John Warner, named after the former Virginia Senator and former Secretary of the Navy.

The senator and his wife, who is the Ship’s Sponsor, authenticated the keel by chalking their initials onto a metal plate. Their initials were then welded onto the plate.

During the ceremony, the senator and his wife, Jeanne Warner, who is the Ship’s Sponsor, authenticated the keel by chalking their initials onto a metal plate. Their initials were then welded onto the plate and later permanently affixed to the ship.

Laying the keel is the symbolic beginning of building the ship, originating from the large structural beam (or keel) that serves as the foundation or spine of the ship’s hull. Although modular construction techniques mean that the ship is no longer built from the bottom up, the keel laying is still celebrated as a momentous event in the ship’s construction.

The previous 12 Virginia-class fast attack submarines were all named for states.

Warner was appointed undersecretary of the Navy in February 1969. Later, Warner represented Virginia in the U.S. Senate from 1979 to 2009, where he was a leader in national defense issues, serving continuously on the Senate Committee on Armed Services. He held leadership roles as chairman or ranking member for half of his tenure on this committee and also served many years on the Senate Select Committee on Intelligence.

During the last year of World War II Warner served in the Navy as a petty officer third class. He also served in the Marine Corps during the Korean War as a lieutenant.