Newport News, Va.  - Two people are dead and one is wounded after a shooting in Newport News on Thursday.

Police received a call about an accident just after 11 a.m. on Thursday where a van had hit a parked vehicle near 14th Street and Wickham Avenue.

While they were on their way to the scene, the call was upgraded to a shooting.

When officers arrived, they found two men in a silver van who had been shot. Both were pronounced dead at the scene.

The victims have been identified as 38-year-old Cadre Antwoine Grey of Norfolk and 30-year-old Quinton Antonio Kelly of Newport News.

Lots of police tape & lots of people out on Wickham & 15th pic.twitter.com/JQ96Kg7xXR

Shortly after police responded to the scene, a witness pointed out a possible suspect that was running away from the scene.

An officer and Sergeant found someone matching the suspect's description on Roanoke Avenue.

Chief Myers said the man was armed and given orders to drop his weapon. Instead of complying, the man refused to surrender and ran from the officers.  Chief Myers says the man did fire his gun at one point while refusing to surrender.

Both responding officers fired their weapons at the man during the encounter.

The suspect, 33-year-old Laratio Lorenzo Dantzler, was taken to the hospital with a gunshot wound to his abdomen. Dantzler was released from the hospital and taken into police custody on January 18.

After the shooting, police recovered two handguns from the scene.

The officers who shot the man are now on administrative duty. Investigators say the officers were wearing body cameras, however, that footage will not be released at this time.

Chief Myers: "We know what happened, we do not know why at this point."

A witness says there could be a second suspect who ran away from the accident scene. He was described as a black male wearing a blue jacket.

"Right now, our priorities are identifying that second suspect and taking him into custody," said Chief Myers.

On Thursday evening, Newport News Police served a search warrant at a home on 14th Street. They said the search could be related to the shootings. Officers left the home with multiple evidence bags. People who live at the home did not comment on the search. 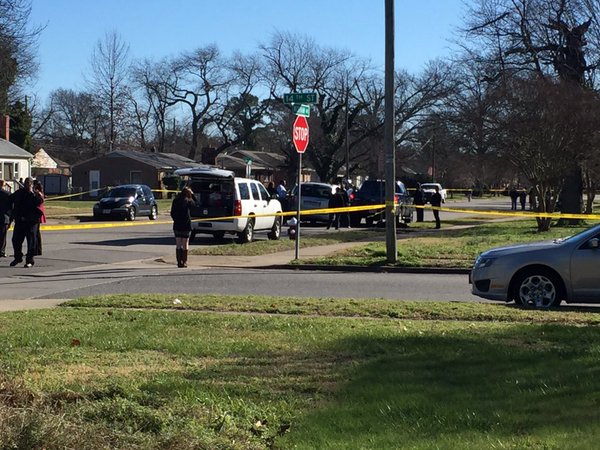