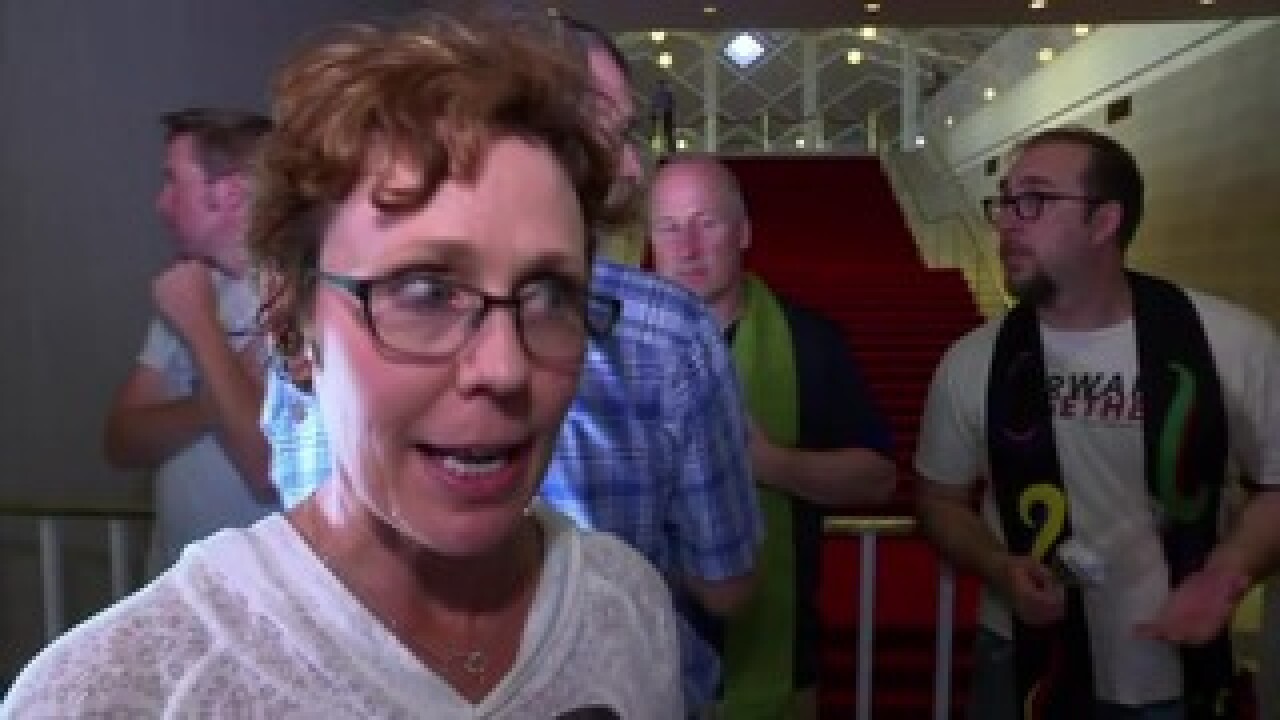 At least 54 protesters were arrested at the North Carolina state house in Raleigh Monday, as pro- and anti-LGBT rights demonstrators descended on the state capital to protest or support a controversial law enacted last month.

Eighteen protesters were arrested on “building violations” charges and others were arrested and accused of staying in the building after it closed for the evening, according to Officer Scott Cameron of the General Assembly Police.

The protestors may have been protesting the Public Facilities Privacy and Security Act, signed into law last month, otherwise known as the “bathroom bill,” Cameron said. All of the protesters were transported to the Wake County Jail.

The law, also known as House Bill 2 or HB2, put in place a statewide policy that bans individuals from using public bathrooms that do not correspond to their biological sex. It also stopped cities from passing anti-discrimination ordinances to protect gay and transgender people.

One LGBT-friendly publication, Advocate, reported that Mara Keisling, executive director of the National Center for Transgender Equality, was among those arrested. It reported that she used the ladies’ restroom — which is not the gender listed on her birth certificate.

The law has faced staunch opposition from gay rights groups and others who have slammed it as discriminatory. People vowed to boycott the state, celebrities canceled concerts and companies said they were pulling out of business deals in North Carolina.

Most recently, Nick Jonas and Demi Lovato announced on social media that they are canceling their Raleigh and Charlotte shows.

“We have decided to cancel our ‘Honda Civic Tour: Future Now’ shows in Raleigh and Charlotte,” Jonas’ Instagram announcement reads.

“One of the goals for the tour has always been to create an atmosphere where every single attendee feels equal, included, and accepted for who they are.”

Lovato posted the same statement on her Twitter page.

The posts included the hashtag #RepealHB2.

As of early Tuesday morning, tickets for the Charlotte show on June 30 and the July 2 show in Raleigh were still available for purchase.

HB 946, a bill to repeal the controversial law, was filed Monday by North Carolina State Rep. Darren Jackson, a Democrat.

The bill will be assigned to one or more committees in the coming days, and its sponsor told CNN that he hopes “that it would receive a hearing.”

Jackson said he is hoping people will see that this bill really is about discrimination, and says that those who don’t are not fully reading it.

“North Carolina is so much better than this,” he said.

More than 150,000 signatures demanding the repeal of North Carolina’s anti-LGBT House Bill 2 were delivered to the state house Sunday, the ACLU of North Carolina said in a statement posted on its website Sunday.

“It’s time the legislature get to work repairing the damage it has caused with the passage of HB 2,” said Sarah Preston, acting executive director of the ACLU of North Carolina.

Last month, a federal lawsuit was filed against the North Carolina Gov. Pat McCrory and other state officials over the law.

“After listening to people’s feedback for the past several weeks on this issue, I have come to the conclusion that there is a great deal of misinformation, misinterpretation, confusion, a lot of passion and frankly, selective outrage and hypocrisy, especially against the great state of North Carolina,” he said. “But based upon this feedback, I am taking action to affirm and improve the state’s commitment to privacy and equality.”

Opponents of the law said Tuesday that the governor’s executive order was too little, too late.