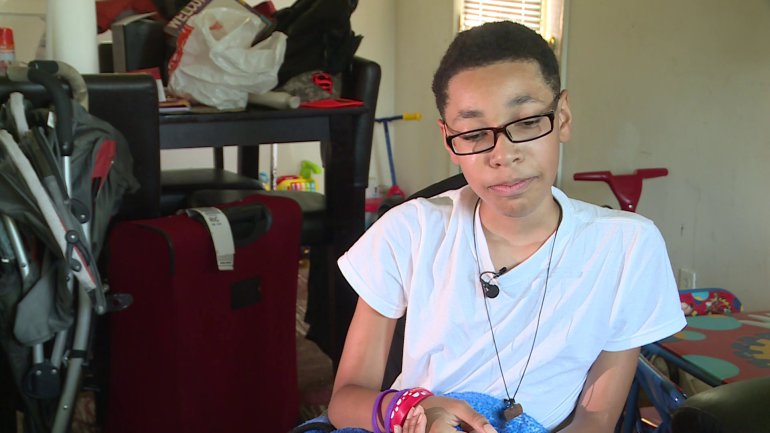 HENRICO, Va., – A family returned home Monday night to find their Eastern Henrico home broken into and thousands of dollars worth of electronics missing after a Make-A-Wish vacation in Florida.

Keisha Wallen told WTVR her family flew to Orlando on August 9 and spent a week visiting theme parks, thanks to the generosity of the non-profit foundation. Make-A-Wish grants “wishes” to children with life-threatening medical conditions.

Her son, 12-year-old Rell, was diagnosed with Duchenne muscular dystrophy about two years ago.

Wallen said four TV’s, a Playstation 4, Xbox One, a laptop, hoverboard, and studio equipment were taken from the home.

“When I came into the living room the TV was gone,” Rell said. “I then went into my room and my games and my TV were gone, too.”

Keisha Wallen said the gaming system was Rell’s chance to escape from the confinements of his wheelchair.

“Sometimes I’d fall asleep talking to my friends,” Rell said. “I have nothing to watch or play. Please bring our stuff back.”

Rell’s medical equipment now sits beside the table where he used to play his video games.

“It’s just frustrating to come home, your child is so excited to come home and play something that he no longer has,” she said. “It’s just sad. It hurts me because they take his most important thing.”

It’s been a tough year for his family. In August 2015, Rell’s older brother, Roderick, died from the same disease at 18 years old.

The Wallen’s have filed a police report, but Henrico Police said they didn’t have additional information about the crime.

If you’d like to help the family, a GoFundMe has been set up.