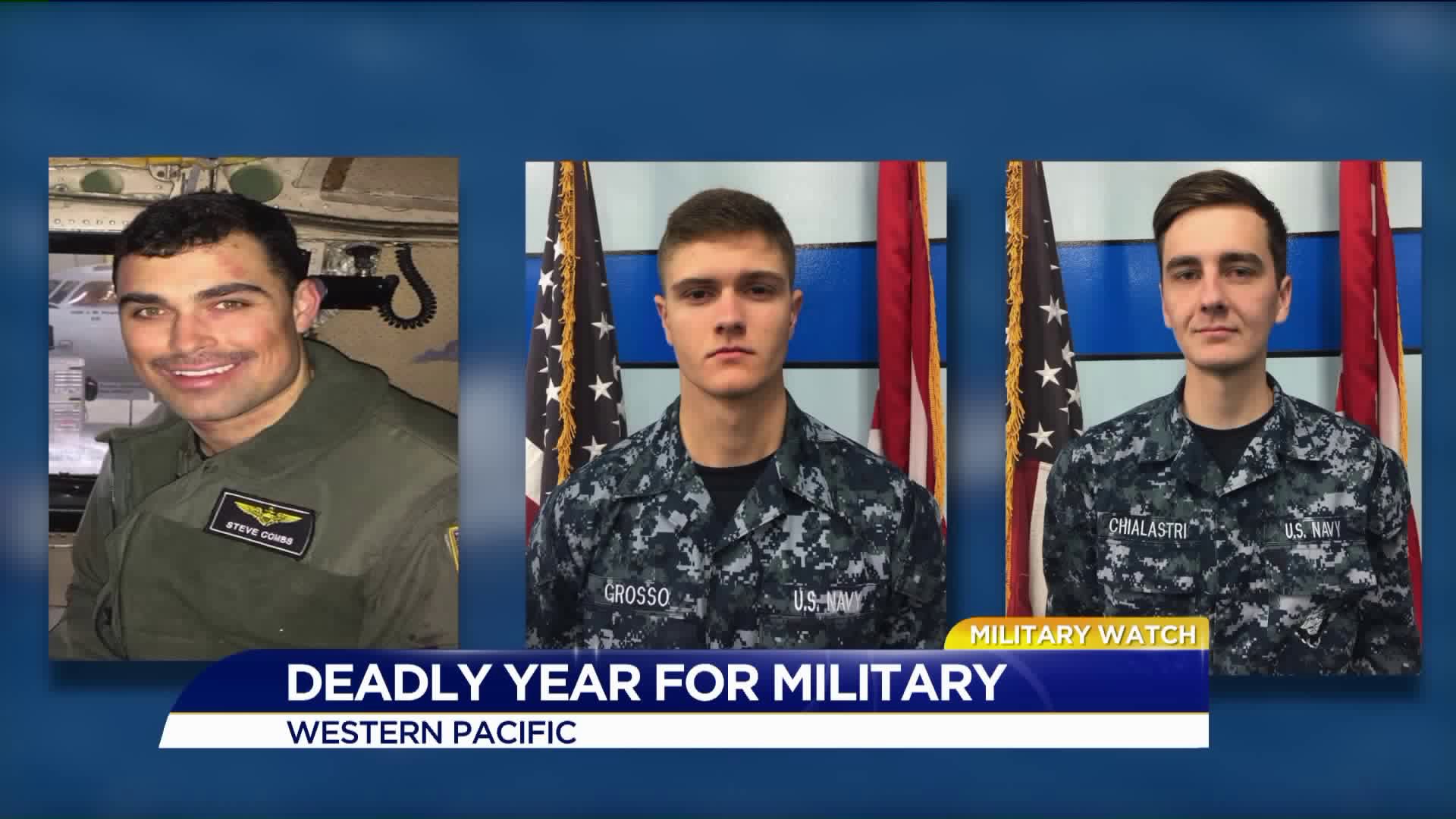 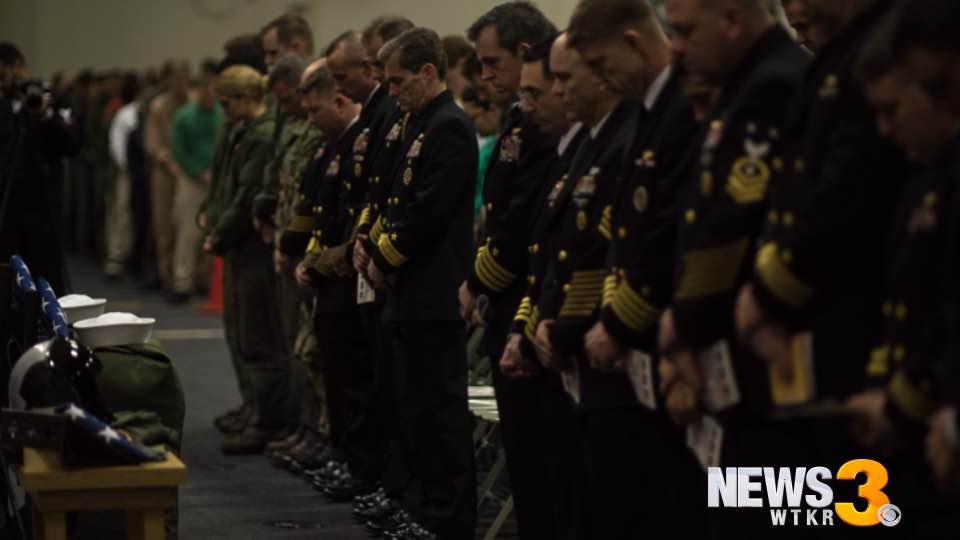 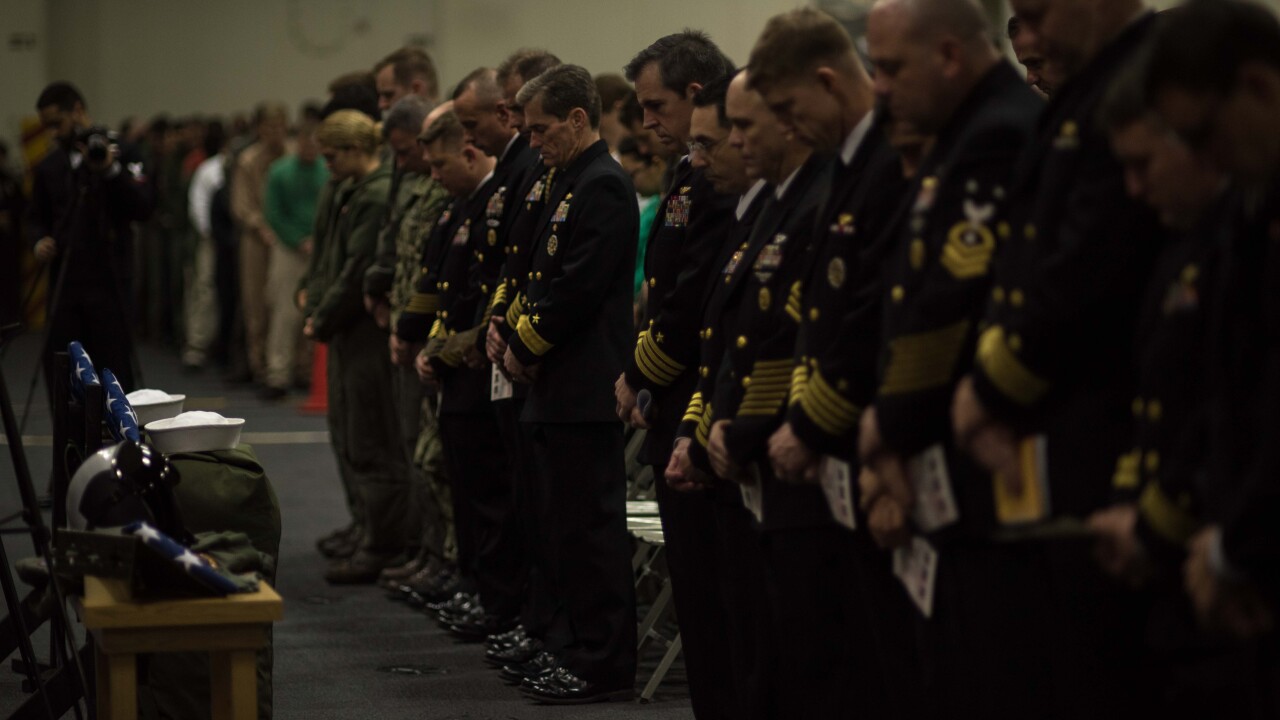 PHILIPPINE SEA - A memorial service was held aboard the USS Ronald Reagan Sunday in honor of three Sailors who went missing following a plane crash in the Philippine Sea.

There were 11 crew and passengers aboard a C-2A Greyhound from VRC-30 when it crashed into the ocean approximately 500 nautical miles southeast of Okinawa, Japan on November 22.

"The loss of these crew members hits across the entire ship with great significance," said Capt. Buzz Donnelly, Ronald Reagan’s commanding officer. "On behalf of the entire crew of USS Ronald Reagan, I extend heartfelt prayers and sincere condolences to the families and friends of the three shipmates we lost."

The Navy provided this information about each of the three men lost at sea:

Aviation Boatswain’s Mate (Equipment) Airman Matthew Chialastri, from Louisiana, joined the Navy on June 25, 2014. After leaving Recruit Training Command, he began his active duty career with VP-30, a P-8 training squadron, before reporting to duty on USS America (LHA 6), where he served from Dec. 1, 2015 to Oct. 1, 2017. He arrived at Commander Fleet Activities, Yokosuka, Japan (CFAY), and checked into Ronald Reagan’s shore detachment, Reagan Ranch, on Nov. 5, 2017 to begin his preparations to join Ronald Reagan underway.

Lt. Steven Combs, from Florida, received his commission through the Naval Reserve Officer Training Corps program at the University of Colorado in 2011, earning a Bachelor of Science in Finance. In March of 2015, he reported to Fleet Logistics Support Squadron (VRC) 30, forward-deployed to Naval Air Facility (NAF) Atsugi, Japan. He deployed with Carrier Air Wing Five (CVW) 5 onboard both USS George Washington (CVN 73) and Ronald Reagan, where he served as detachment assistant operations officer and administrative officer. Combs accumulated over 1,200 flight hours and 100 carrier-arrested landings.

Aviation Ordnanceman Airman Apprentice Bryan Grosso, from Florida, graduated from West Florida High School of Advanced Technology in the spring of 2017 and then reported to Naval Station Great Lakes for recruit training. After graduating boot camp, he attended “A” school in Pensacola, Florida, and received orders to Ronald Reagan. He arrived at CFAY and checked in to Reagan Ranch on Nov. 5, 2017 to begin his preparations to join his first ship underway.

The memorial ended with a procession of crew pausing in front of photos of the Sailors in remembrance and farewell.

An investigation into the crash is currently underway.