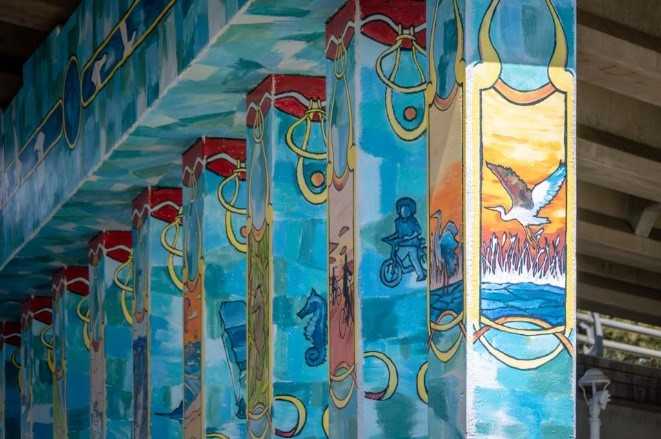 VIRGINIA BEACH, Va. – The Rudee Walkway on 4th Street has received a makeover!

The Office of Cultural Affairs celebrated Wednesday the completion of “Seashore Cathedral,” a mural by Giuseppe Percivati.

Percivati is an Italian street artist based in the U.S. and Philippines. His work can be seen in Italy, the UK, Japan, Pakistan, Philippines, Australia, New Zealand, Canada and the United States.

“I want to create the idea that the whole underpass, in the area of the columns, is made of stained glass, giving lightness and brightness to the atmosphere,” Percivati said.

The back wall pays homage to Paul DiPasquale’s iconic statue, “King Neptune,” that can be seen at the 31st Street Neptune Park at the Oceanfront.

The artwork can be seen on the underpass columns of the Rudee Walkway that connects the marina to the 4th Street municipal lot.