Pelosi: No State of the Union in the House until shutdown ends 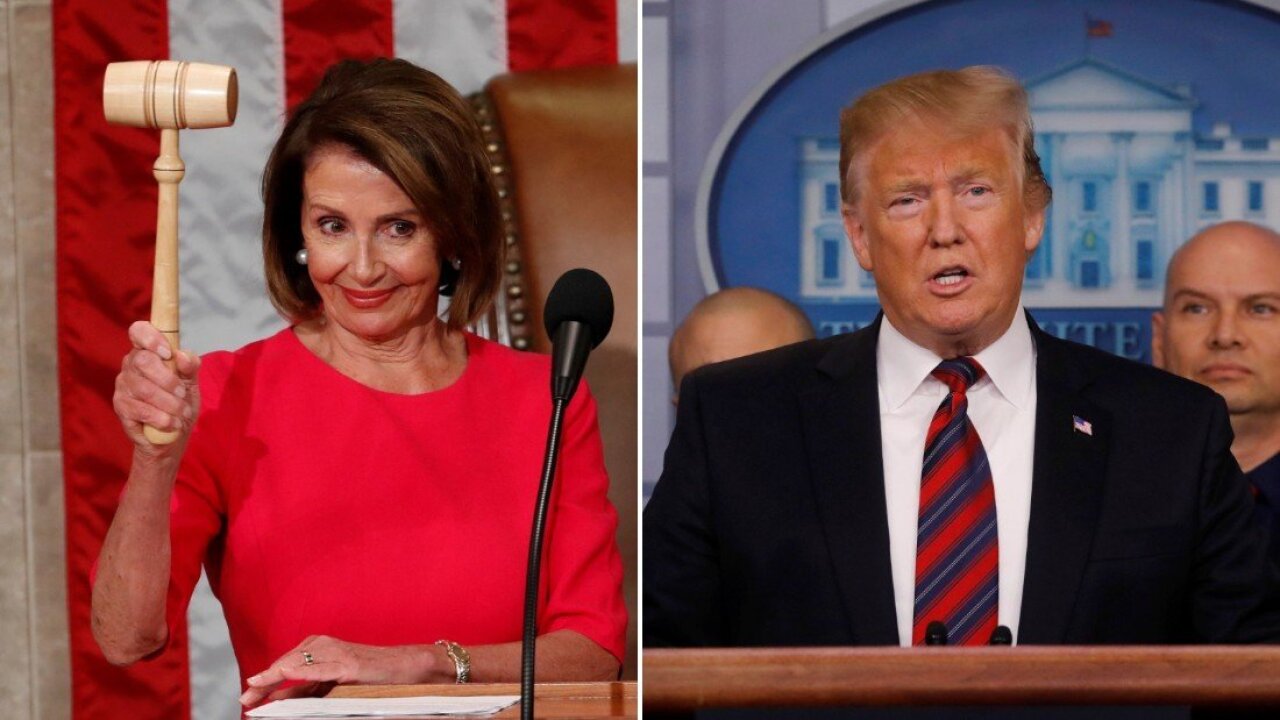 President Donald Trump insisted in a letter Wednesday he would deliver his annual State of the Union address from the chamber of the US House next week as planned, telling House Speaker Nancy Pelosi her concerns about security during a partial government shutdown were unfounded.

House Speaker Nancy Pelosi rebuffed President Donald Trump on Wednesday, saying she would not allow him to give the State of the Union in the House chamber while the government is shut down.

Trump had insisted in a letter that he was planning on delivering his annual State of the Union address from the chamber of the US House next week as planned, essentially daring the body’s top Democrat to formally disinvite him from delivering the yearly message.

Hours later, Pelosi responded, saying she would refuse to bring up for a vote a measure that would allow Trump to speak.

“I am writing to inform you that the House of Representatives will not consider a concurrent resolution authorizing the President’s State of the Union address in the House Chamber until the government has opened,” Pelosi wrote.

The back-and-forth escalated one of the rancorous subplots of the extended standoff over border security that has shuttered government agencies and left hundreds of thousands of federal workers without pay.

Trump’s letter, written with characteristic flourish, dismissed concerns raised by Pelosi about security during a partial government shutdown. It set up a potential showdown with the Democratic speaker, who controls the chamber’s proceedings and must allow for a vote on his speech.

“I will be honoring your invitation, and fulfilling my constitutional duty, to deliver important information to the people and Congress of the United States of America regarding the State of our Union,” Trump wrote in his letter.

He wrote he’d consulted with Secret Service and Homeland Security officials, who told him of “absolutely no problem regarding security with respect to the event.” And he declared the speech would occur on Tuesday from the House chamber.

“It would be so very sad for our country, if the State of the Union were not delivered on time, on schedule, and very importantly, on location!” he wrote.

President Donald Trump insisted in a letter Wednesday he would deliver his annual State of the Union address from the chamber of the US House next week as planned, telling House Speaker Nancy Pelosi her concerns about security during a partial government shutdown were unfounded.

As speaker, it is Pelosi’s prerogative to invite the President to deliver the annual address. Both the House and the Senate would need to pass resolutions convening a Joint Session of Congress before the President’s appearance. And it’s not yet clear — despite Trump’s insistence he would be appearing in the Capitol next Tuesday — whether Pelosi would take the required steps.

Peppered on Wednesday with questions about the President’s letter, Pelosi was circumspect as she departed her office.

The letter was the latest in a round of squabbling over the yearly speech, which is a constitutional requirement that has been caught up in the back-and-forth over border security and reopening shuttered government agencies.

Pelosi initially wrote Trump last week to inform him the speech should be delayed, or delivered in writing, since the law enforcement agencies tasked with protecting the Capitol during the event are affected by the shutdown.

The Department of Homeland Security later cast those concerns aside, saying its agents and officers had been preparing for months to protect the venue, and would be ready shutdown or not.

The bickering over the speech had little outward bearing on the broader dispute over border security and a wall, which has prompted the longest government shutdown in US history. In his letter, Trump did not propose any new way to end the shutdown. Democrats have so far rejected the White House’s offers to include some deportation protections in exchange for wall funding.

Trump has not spoken with Pelosi since a January 9 meeting in the White House which Trump abruptly left after Pelosi told him she would not support border wall funding, according to a congressional aide familiar with the matter. The President has also not spoken to Senate Minority Leader Chuck Schumer since that January meeting.

Polls show most Americans blame Trump for the shutdown, and say border wall funding isn’t worth closing down parts of the government. Trump has voiced concern about losing the public’s support, and expressed surprise most Americans aren’t on his side.

White House aides had hoped to use the State of the Union to convince more people of the wisdom in building a wall, and had begun drafting a speech with the shutdown as a backdrop. But Pelosi’s initial letter threw those plans into flux.

With the future of the President’s speech in question, aides began weighing other venues for the presidential address, and writing an alternative version of the speech. But the broad preference had remained to deliver it in the traditional manner, before a joint session of Congress.

Administration officials said they were hoping to essentially dare the House speaker to formally uninvite the President from addressing the nation, using Wednesday’s letter to scale up pressure on Pelosi to say one way or the other whether he will be allowed to deliver the speech in the House chamber.

The hope, the officials said, is to force her hand — either to say he cannot speak from the House chamber or to allow it to move forward.

Both Pelosi and House Majority Leader Steny Hoyer advised lawmakers not to bring family to Washington next week, an indication the State of the Union was not expected to happen as planned, according to a source in a Wednesday morning caucus meeting.

Still, Hoyer told reporters later in the day that security would not be a concern if the President speaks in the Capitol on Tuesday.

“The Capitol Police is going to be fully prepared to do whatever,” he said. “They’re making preparations and the sergeant-at-arms has assured us that they will be prepared.”

Other Democratic leaders sounded less certain the address would proceed as planned.

“Unless the government is reopened, it’s highly unlikely the State of the Union is going to take place on the floor of the United States House of Representatives,” said Rep. Hakeem Jeffries, a member of Democratic leadership, during a news conference Wednesday.

While other options exist for delivering the speech — including delivering it somewhere outside of Washington — White House officials said they are hesitant to hold a campaign-style rally instead of the State of the Union address because of a perceived informality.

The message Trump plans to deliver at the Capitol — even one shaped around the shutdown — would be much more sober than the President’s usual rhetoric at a rally, where he often deviates from the script and works off the crowd.

The speech is also expected to include other topic areas, such as the economy and foreign policy, that might be harder to include in a speech in a political venue. And officials believe they have a positive message on both of those areas they want to break through.

Some officials said a rally would be viewed as just another campaign speech, which they acknowledge people have started to tune out. And there is a recognition among aides it’s harder to keep Trump on-message in a rally versus a more formal address. Officials also noted that television networks rarely carry the President’s rallies live.

Presidential advisers have also looked again at the Oval Office and at other venues inside the White House for the address, though the Oval Office is considered a tough sell for the President since he disliked the address to the nation he delivered there earlier this month, and polls showed it changed few people’s minds about the border wall. Aides have also surveyed the East Room and Cross Hall areas, which could more easily facilitate an audience.