Chinese woman who paid $6.5M after her daughter got into Stanford says she did it to help others 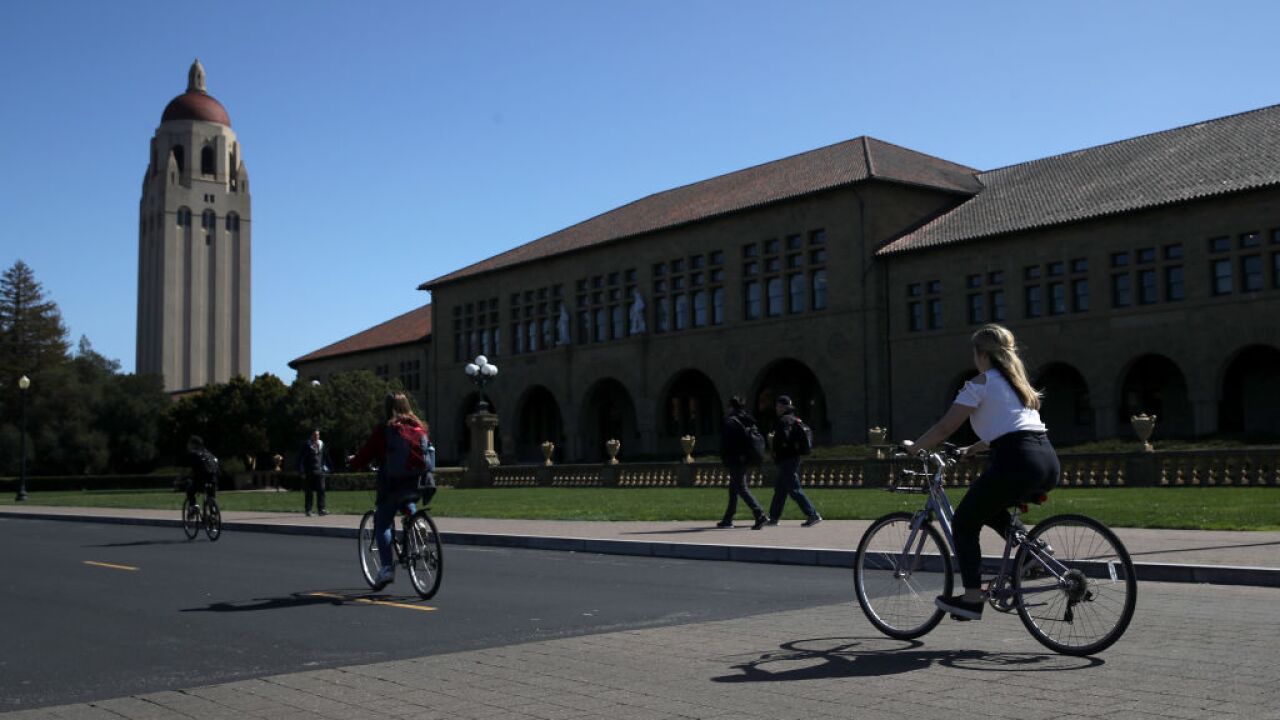 STANFORD, CA – MARCH 12: Cyclists ride by Hoover Tower on the Stanford University campus on March 12, 2019 in Stanford, California. More than 40 people, including actresses Lori Loughlin and Felicity Huffman, have been charged in a widespread elite college admission bribery scheme. Parents, ACT and SAT administrators and coaches at universities including Stanford, Georgetown, Yale, and the University of Southern California have been charged. (Photo by Justin Sullivan/Getty Images)

The mother of a Chinese student who was admitted to Stanford University said the family gave $6.5 million to the man at the center of a massive college admissions scandal as a donation for scholarships and funding.

Fifty people have been charged in the largest college admissions scam ever prosecuted in the United States. The scandal has ensnared celebrities such as Felicity Huffman and Lori Loughlin, none whom spent as much as the Chinese woman.

In a statement provided through her attorney, the woman identified as Mrs. Zhao admits giving $6.5 million to the foundation of William “Rick” Singer, the ring leader of the scam.

Zhao said she’d sought college advisory services from him because she was not familiar with the admission process for colleges in the United States.

After her daughter got into Stanford, the statement said, Singer asked her for a donation to the university through his foundation. Singer told her the donation was “for the salaries of academic staff, scholarships, athletics programs and helping those students who otherwise will not be able to afford to attend Stanford,” Zhao said.

The statement from her attorney, Vincent Law, did not provide her first name or information about her husband or her daughter.

But in a 2017 video posted on a popular Chinese platform Douyu, a student who identified herself as Yusi Zhao said she was admitted to Stanford through her own hard work.

“This year I am admitted to Stanford. I’m really lucky I’d like to say,” said Zhao in the 90-minute video. “I want to tell you all that I gained my admission into Stanford through my own hard effort. … I wasn’t doing well academically when I was in elementary school, but I can now go to Stanford after working hard.”

Yusi Zhao is the daughter of Chinese billionaire Zhao Tao, according to the Stanford Daily.

Mother says she fell victim to the scam

While Singer’s company provided “educational advisory services,” she said, it did not guarantee admission into any school. Her daughter has a record of “good academic performance and extracurricular achievements,” and had offers from several US colleges, she said.

“Since the matters concerning Mr. Singer and his foundation have been widely reported, Mrs. Zhao has come to realize she has been misled, her generosity has been taken advantage of and her daughter has fallen victim to the scam,” the statement said.

“Mr. Wu was introduced to Rick Singer through Morgan Stanley as a trusted source. Singer, in an effort to line his own pockets with millions of dollars from a Morgan Stanley client, stated in an email, before any payment was made, that the money would be paid to Stanford University ‘to endow staff salaries and scholarships’ and ‘to fund athletics special programs and the university’s underserved outreach programs to help the needy to afford to attend Stanford,” Wu said in a statement through his attorney.

A spokeswoman for Morgan Stanley told CNN the company is cooperating with investigators, and said Wu had been terminated from his job.

In a statement, Stanford University said it did not get the millions of dollars and did not know about it before it was widely reported.

“It’s important to clarify that Stanford did not receive $6.5 million from Singer, or from a student’s family working with Singer,” it said. “Stanford was not aware of this reported $6.5 million payment from the family to Singer.”

The student, her parents and the man who introduced them have not been charged in the scandal.

Of the 50 people charged, 33 are parents. They are accused of conspiring to use their wealth to get an advantage in the college admissions system. A total of 17 wealthy parents, including Loughlin, formally submitted not guilty pleas in federal court in Boston this week.

Prosecutors allege the actress and her husband, Mossimo Giannulli, paid $500,000 to a fake charity to get their two daughters accepted into the University of Southern California, falsely designating them as crew recruits.

The “Full House” actress is the highest-profile figure caught up in a scandal that has embroiled dozens of wealthy parents, college coaches and standardized test administrators.

Huffman was among more than a dozen parents who pleaded guilty to a charge of conspiracy to commit fraud last month. In exchange for the guilty plea, prosecutors said they will recommend incarceration at the “low end” of the sentencing range and will not bring further charges against her.

Singer has pleaded guilty and is cooperating with the government.

Singer owned a college counseling and prep business, and served as CEO of the Key Worldwide Foundation, the charity connected to it.

Through those organizations, he allegedly facilitated cheating on standardized tests, and bribing college coaches and administrators to falsely designate the children as recruited athletes — even if they didn’t play that sport.

Hollywood stars, top CEOs, college coaches and standardized test administrators allegedly took part in the scheme to cheat on tests and admit students to leading institutions as athletes, regardless of their abilities. At least eight universities, including Stanford and the University of Southern California, are referred to in a federal indictment and criminal complaint.

Singer was paid about $25 million by parents as part of the scheme, said Andrew Lelling, the US attorney for Massachusetts. Some of that money went to test administrators and coaches involved in the scam, prosecutors said.