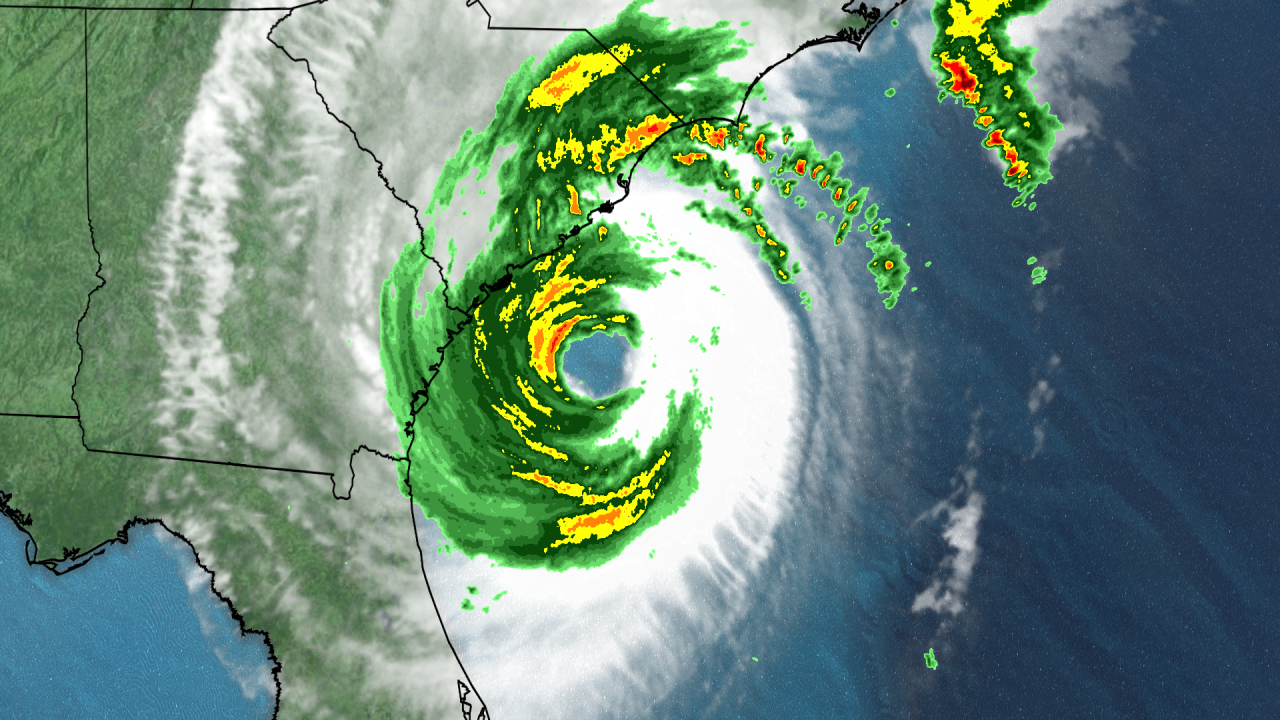 HURRICANE WARNING: For Dare, Currituck, Camden, Pasquotank, Perquimans, Hertford and Chowan counties including the Pamlico and Albemarle Sounds. This means hurricane force winds in excess of 74 mph are expected within the next 36 hours.

TROPICAL STORM WATCH: for Sussex County. This means tropical storm force winds in excess of 39 mph will be possible within the next 48 hours.

This morning will be your last chance to get anything you need ahead of Hurricane Dorian. Skies will be mostly cloudy today with the outer rain bands of Dorian moving in, mainly this afternoon and evening. A strong to serve storm is possible including the threat for tornadoes, mainly in eastern North Carolina. The wind will be light this morning but will pick up speed out of the northeast at 10-20 mph by the late afternoon. Expect high temperatures in the low 80s. The heaviest rain will move in overnight and through most of the day Friday. Winds will also continue to pick up overnight.

We will feel the biggest impacts from Hurricane Dorian on Friday. Expect widespread heavy rain Friday morning, tapering off by the late afternoon. We could see 4-8 inches of rainfall across much of eastern North Carolina and parts of southeastern VA, with locally higher totals possible. Expect 2-4 inches of rain for the peninsulas and inland.

We will also see coastal flooding on Friday. Storm surge of 2-4 feet in Hampton Roads and the Albemarle, 3-6 feet for the Outer Banks is possible. One of the impacts we’re most worried about is tidal flooding. High tide at Sewells Point is at 4 PM on Friday. Right now, we could see major flooding. Many flood prone areas will become inundated and impassable during that time period.

Dorian will quickly move off to the northeast Friday night and high pressure will build in just in time for the weekend. Expect clearing skies with low rain chances for the weekend. Temperatures will warm to the low and mid 80s. Expect rough surf and some coastal/tidal flooding to linger through the weekend.

Dorian expected to bring damaging winds, significant rainfall, and major flooding to the Mid-Atlantic coast today and tomorrow. Dorian is centered about 70 miles SSE of Charleston, South Carolina and moving NNE at 8 mph. A turn toward the NE is anticipated by tonight, and a NE motion at a faster forward speed is forecast on Friday. On the forecast track, the center of Dorian will continue to move close to the coast of South Carolina today, and then move near or over the coast of North Carolina tonight and Friday. The center should move to the southeast of extreme southeastern New England Friday night and Saturday morning, and approach Nova Scotia later on Saturday.

Maximum sustained winds are near 115 mph with higher gusts. Dorian is a category 3 hurricane on the Saffir-Simpson Hurricane Wind Scale. Some fluctuations in intensity are expected this morning, followed by slow weakening through Saturday. However, Dorian is expected to remain a hurricane for the next few days.

Tropical Storm Gabrielle moving over open waters in the eastern Atlantic. Gabrielle is centered about 825 miles WNW of the Cabo Verde Islands and moving NW at 8 mph. This motion is expected to continue for the next few days with an increase in forward speed. Maximum sustained winds remain near 50 mph with higher gusts. Little change in strength is forecast during the next couple of days.  Afterward, some slow strengthening is expected to begin by this weekend.

We are tracking a small area of low pressure located a few hundred miles northeast of Bermuda. Significant development of this system is not anticipated while it moves NE across the central north Atlantic due to unfavorable upper-level winds.

A trough of low pressure located about 500 miles east of the Leeward Islands is producing a large but disorganized area of showers and thunderstorms. Only slow development of this disturbance, if any, is expected during the next couple of days while it moves slowly NW.

A broad area of low pressure associated with a tropical wave located about halfway between the coast of Africa and the Cabo Verde Islands is producing disorganized showers and thunderstorms. Gradual development of this system is possible and a tropical depression could form while it moves west across the tropical Atlantic Ocean through early next week.