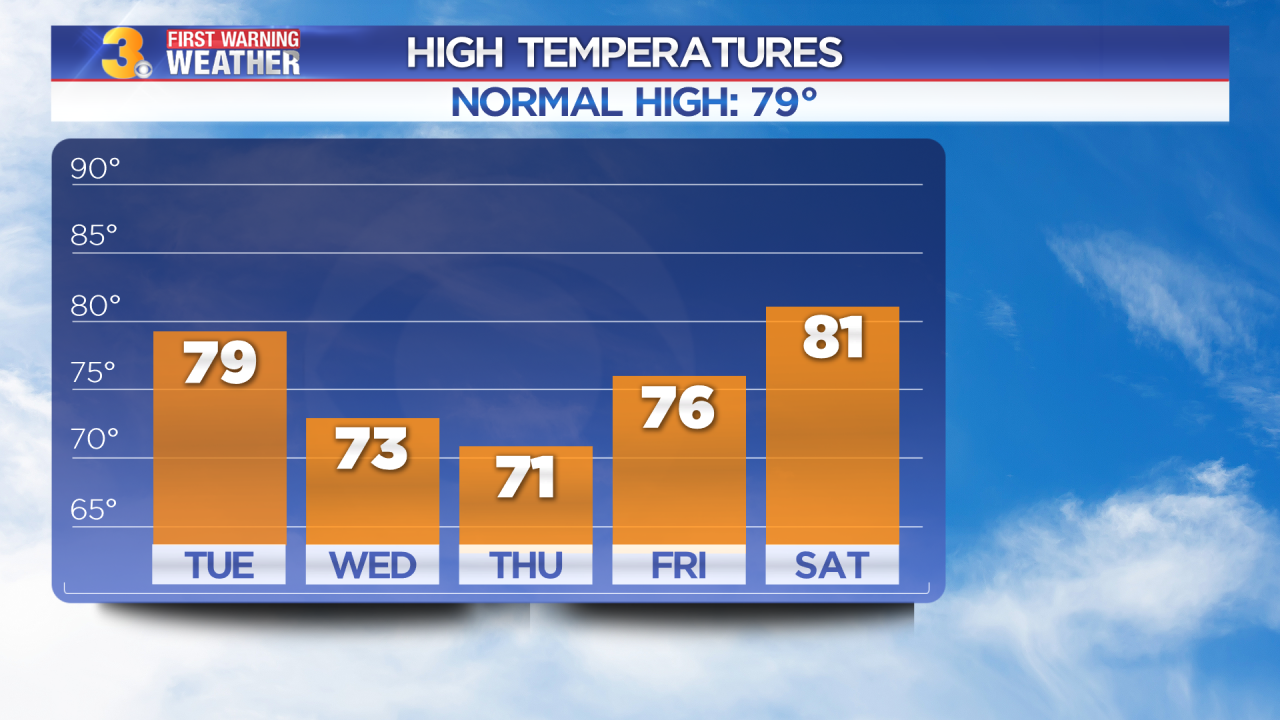 Fall-like changes on the way… We will see partly to mostly cloudy skies today with isolated showers possible. Highs will struggle to reach 80 today, about 5 degrees cooler than yesterday. Northeast winds will gradually ramp up today, 10 to 20 with gusts to 25 mph this afternoon.

Highs will drop to the low and mid 70s tomorrow. Humidity will continue to drop, making it feel more like Fall. We will see mostly sunny to partly cloudy skies with low rain chances. It will still be windy tomorrow with NE winds at 10 to 20 and gusts to 30 mph. The persistent NE winds will trigger some minor flooding during times of high tide.

We will cool to the low 70s on Thursday with a nice mix of sun and clouds and low humidity. It will still be windy on Thursday, NE at 10 to 20 and gusts to 25 mph.

Hurricane Humberto will move closer to Bermuda this week. We can expect rough surf and a high risk for rip currents through midweek.

Hurricane Humberto growing as it moves toward Bermuda. Humberto is centered about 525 miles west of Bermuda and moving ENE at 8 mph. This general motion with a gradual increase in forward speed is expected through early Thursday. On the forecast track, the center of Humberto is expected to pass just to the north of Bermuda Wednesday night.

Data from the Hurricane Hunter aircraft indicate that maximum sustained winds remain near 100 mph with higher gusts. Some strengthening is forecast during the next 36 hours and Humberto could become a major hurricane late tonight or Wednesday morning.

Tropical Depression Ten forms in the central tropical Atlantic. TD Ten is centered about 1165 miles ESE of the Leeward Islands and moving WNW at 12 mph. A WNW motion at a somewhat faster forward speed is expected over the next few days. On the forecast track, the system will approach the northern Leeward Islands Thursday night or Friday.

Maximum sustained winds are near 35 mph with higher gusts. Strengthening is forecast during the next couple of days, and the depression is expected to become a tropical storm later today.  The system is forecast become a hurricane by the time it approaches the northern Leeward Island.

Tracking a broad area of low pressure located over the northwestern Gulf of Mexico near the central Texas coast. Some slight development is still possible before the system moves inland along the northwestern Gulf coast later tonight or early Wednesday. Regardless of development, this disturbance is expected to produce areas of very heavy rainfall and possible flash flooding along the coastal regions of southwestern Louisiana and central and upper Texas tonight and Wednesday, and over eastern Texas and western Louisiana on Thursday.