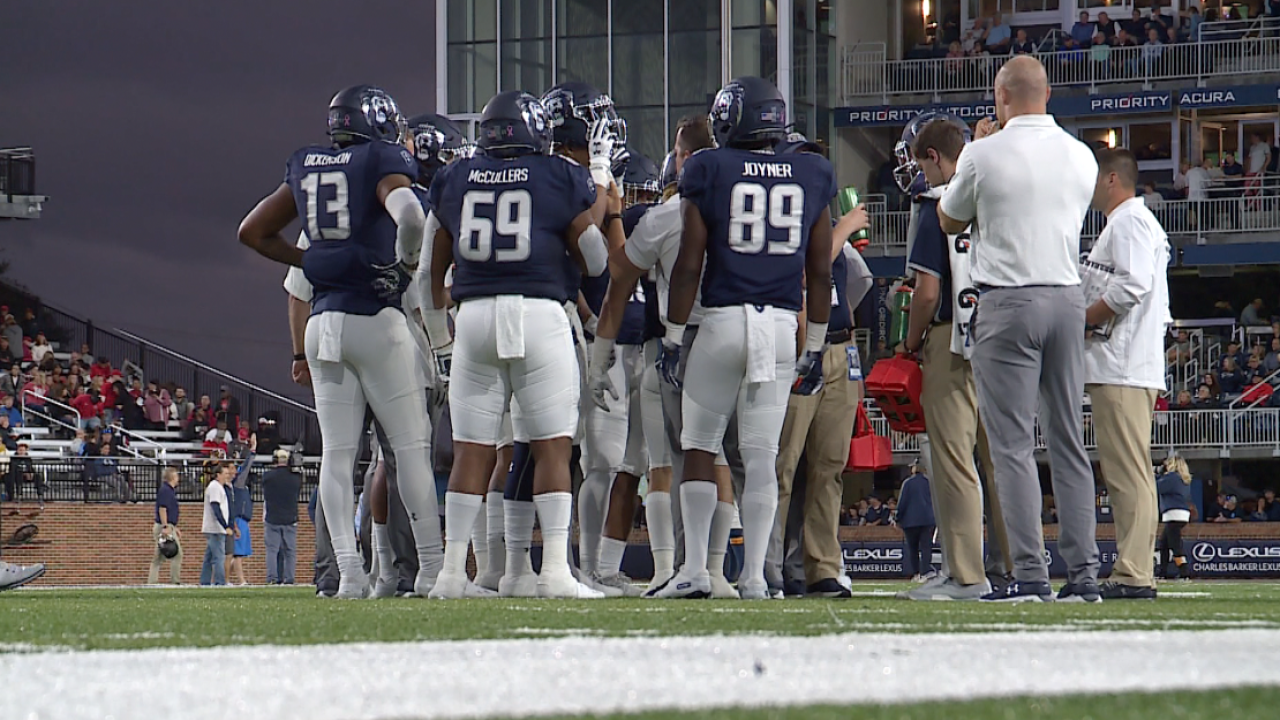 NORFOLK, Va. (ODUSports.com) – Old Dominion’s defense played another outstanding game Saturday night against Western Kentucky. But without two key offensive starters who are out with injuries, the offense struggled and the Hilltoppers claimed a 20-3 victory at S.B. Ballard Stadium.

ODU’s defense held the Hilltoppers at bay until late in the fourth quarter when the Monarchs ran out of gas.

WKU almost totally shut down ODU’s offense in the first half, as the Monarchs gained just 59 yards. Even though the defense twice forced turnovers in Hilltopper territory, the Monarchs came away with just 3 points on a Nick Rice field goal and WKU led, 10-3.

Western Kentucky extended the lead to 13-3 on their first drive in second half with a 32-yard, Cory Munson field goal.

But the Monarchs changed gears and amped up their passing game and the offense finally got into gear. Yet each time the Monarchs got close to the red zone, they stymied their own drives with mistakes.

ODU’s first play in the second half was a 29-yard pass from Smartt to Nigel Fitzgerald, and the Monarchs then drove to the 25. But on first down a short gain was negated by a blindside block, moving the Monarchs back to the 40. Nick Rice then missed a 51-yard field goal.

On its next drive, ODU drove from its 47 to the WKU 32. A fourth-down 11-yard pass from Smart appeared to give ODU a first down. But it was nullified by a holding penalty and the Monarchs were forced to punt.

ODU never got close to the end zone thereafter, and the Hilltoppers put the game out of reach midway through the fourth quarter on a 12-yard pass from quarterback Ty Storey to Joshua Simon.

ODU finished with 160 yards, its third worst offensive game ever. Smartt completed 11 of 27 passes for 105 yards.

Wide receiver Eric Kumah, ODU’s top offensive playmaker, and offensive tackle Nick Saldiveri missed the second game in a row with injuries. It isn’t known when they will return.

ODU took a 3-0 lead thanks to two turnovers forced by the Monarch defense.

Harrell Blackmon intercepted a Ty Storey pass at the 36 and returned it 22 yards to give the Monarchs a first and 10 at the 14.

Three players later Smartt was sacked at the 35 and WKU’s Jaylon George scooped the ball up after he Smartt hit the ground ran untouched for what he thought was a touchdown. But replay officials ruled Smartt was down and the Monarchs punted.

Four plays into WKU’s next possession, linebacker Lawrence Garner forced running back Gaej Walker to fumble and Geronda Hall recovered at the 16. ODU was force to settle for a 24-yard Rice field goal.

WKU then mounted a 67-yard drive to the ODU 14, but was forced to settle for a Cory Munson, 31-yard field goal.

However, on ODU’s next series, Ta’Corian Darden picked off a Smartt pass at the Monarch 32. ODU’s Calvin Brewton then intercepted a Storey pass, but it was nullified by two penalties.

The Hilltoppers then scored on Walker’s 1-yard run and took a 10-3 lead into the half.

ODU hits the road for its next two games, next Saturday at Marshall and the following Saturday at UAB.

Marshall was the preseason favorite in the East Division. UAB is the defending Conference USA champion.