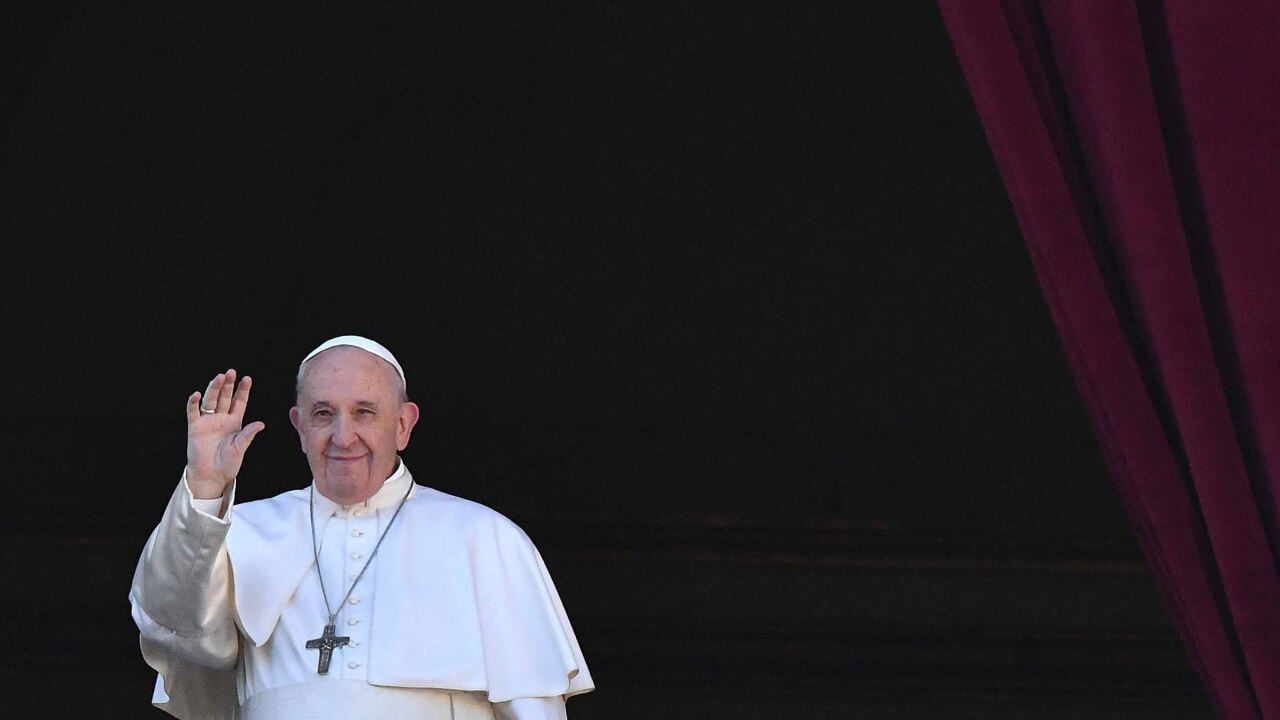 Pope Francis waves from the balcony of St Peter’s basilica during the traditional “Urbi et Orbi” Christmas message to the city and the world, on December 25, 2019 at St Peter’s square in Vatican. (Photo by Alberto PIZZOLI / AFP) (Photo by ALBERTO PIZZOLI/AFP via Getty Images)

Pope Francis has urged the Catholic faithful to embrace the “light of Christ” to help end conflict and injustice around the world, during his Christmas Day address.

Pope Francis waves from the balcony of St Peter’s basilica during the traditional “Urbi et Orbi” Christmas message to the city and the world, on December 25, 2019 at St Peter’s square in Vatican. (Photo by Alberto PIZZOLI / AFP) (Photo by ALBERTO PIZZOLI/AFP via Getty Images)

Speaking from the Vatican balcony under a clear blue sky on Wednesday, the Holy Father prayed for people struck by war, political instability, natural disasters and disease among other hardships in his annual “Urbi et Orbi” (to the city and the world) message.

“There is darkness in human hearts, yet the light of Christ is greater still,” the pope told the thousands gathered in St. Peter’s Square.

The Pope also singled out those persecuted for their Christian faith “particularly in Burkina Faso, Mali, Niger and Nigeria.”

At least 35 civilians, most of them women, were killed in an attack by Islamic militants on Christmas Eve in Burkina Faso, several news outlets reported Wednesday citing local authorities.

In a speech that marked his seventh Christmas as pontiff, the Bishop of Rome also highlighted the plight of refugees and migrants.

Francis concluded his address by urging his flock to “soften our often stony and self-centered hearts.”

“May he bring his smile, through our poor faces, to all the children of the world: to those who are abandoned and those who suffer violence.” the pope added. “On this joyful Christmas Day, may he bring his tenderness to all and brighten the darkness of this world.

Earlier Wednesday, the pontiff made a rare joint appeal with other church leaders for peace in South Sudan.

“In this Christmas season and at the beginning of a new year, we wish to extend to you and to all the people of South Sudan our best wishes for your peace and prosperity, and to assure you of our spiritual closeness as you strive for a swift implementation of the Peace Agreements,” said the pope, Archbishop of Canterbury and former moderator of the Church of Scotland in a statement.

On Tuesday, Francis ushered in the Christian holiday by reminding churchgoers that “God continues to love us all, even the worst of us,” according to Reuters.

In remarks widely interpreted as a reference to recent sexual abuse scandals involving the church, the pontiff said: “Whatever goes wrong in our lives, whatever doesn’t work in the Church, whatever problems there are in the world, will no longer serve as an excuse. It will become secondary, for faced with Jesus’ extravagant love, a love of utter meekness and closeness, we have no excuse.”

Earlier this month, Francis abolished Vatican secrecy rules for cases of sexual abuse, effectively allowing the Catholic church to share documents and information with civil authorities, and enable survivors to be updated of the status of their cases.