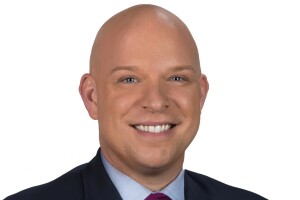 Blaine Stewart anchors on WTKR News 3 and WGNT 27 every weekday morning from 4:30 to 9 a.m. and again at Noon.

More than 20 years ago, Blaine began his career in his hometown of New Orleans, making stops at television and radio stations in Mississippi and Georgia before arriving in Hampton Roads on New Year’s Day in 2007. He even had hair back then!

Blaine is proud to be involved with several wonderful charities in our area, including the Tidewater chapter of Susan G. Komen, St. Jude Children’s Research Hospital and Special Olympics Virginia. Over the years, Blaine has been honored with awards from the Associated Press for his reporting and anchoring, as well as winning Coastal Virginia Magazine’s “Readers’ Choice” award for the past three years.

When he’s not in the newsroom, you can find Blaine binge-watching “The Office” on Netflix, trying out new recipes in the kitchen, or going on spontaneous road trips. You can also hear him on your radio, playing some of your favorite songs on Z104 and 101.3 2WD.