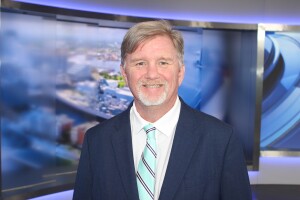 What is your job?
News Director for the CBS and CW affiliates in Hampton Roads Virginia and Northeast North Carolina.

When did you start working here?
November, 2018

Where else have you worked?
I have a long list of TV stops: Decatur and Peoria in Illinois; Dayton and and Toledo in Ohio; Louisville, Kentucky; Boston, and 3 stops in North Carolina; Wilmington, Greensboro and New Bern before coming to Hampton Roads.

Where did you go to college?
Illinois State University. Go Redbirds!

Where did you grow up?
I was born here in Hampton Roads at the Portsmouth Naval Hospital because my Dad was stationed here in The Marine Corps. I only lived here for 4 months before returning 51 years later. I spent most of my childhood in two communities in Illinois, where most of my family and great friends from my childhood still live. Go Cubs!

What are some of the biggest news stories you have covered or led coverage of?
Here in Hampton Roads, I was just about 6 months into my job when a disgruntled city worker murdered 12 people and wounded 4 more at a Virginia Beach municipal building, shaking our community to it's very core. I was the News Director for WCTI in New Bern during Hurricane Florence, a storm that forced the evacuation of our station and devastated the New Bern area and several surrounding communities. We were forced to do news out of trucks from parking lots for weeks, but never gave up in our quest to tell stories. Spending almost 20 years in North Carolina, several hurricanes are part of my history. Obviously the 9-11 attacks for so many reasons. I also covered the 1996 Olympics in Atlanta as a producer, in charge of a team from Louisville covering athletes with ties to Kentucky and Indiana.

What is your philosophy on news?
First, be there for our community when there is an urgent need for them to know about something. Second, be willing to hold the powerful accountable. Third, makes sure the diverse voices in our community are heard. It's important to make sure we're great storytellers too.

What do you love about living here?
Definitely our beaches, and where I live, I occasionally get buzzed by a fighter jet which is awesome every time. We have amazing, historic communities from the Williamsburg area down to North Carolina's Outer Banks.