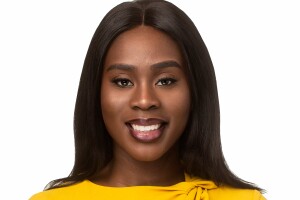 ana-Séntuo Bonsu joined the News 3 team in March 2019 as a reporter. Nana-Séntuo was born and raised in Northern Virginia but spent some time in central Virginia where she kicked off her passion for story telling at Virginia Commonwealth University and received her degree in broadcast journalism.

After graduation in 2014 she traveled across the Atlantic to Accra, Ghana where she was given the opportunity to challenge herself on television at E.Ghana and on the airwaves at Y.FM. While working with these networks, Nana-Séntuo spent her time discussing major topics from politics to social issues, lifestyle and entertainment. After spending two years in Ghana, she returned back to the States where she worked as a reporter with Spectrum News (cable and local ABC affiliate) in Greensboro, North Carolina.

Outside of the newsroom, Nana-Séntuo enjoys going back home to Ghana and spending time with family. She also enjoys a good Sunday brunch!