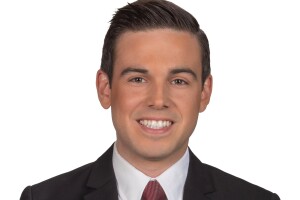 Todd Corillo joined WTKR News 3 in May 2012. It was a homecoming for Todd, returning to the station where he interned while a student at The College of William and Mary.

Todd is a weekday anchor at WTKR and WGNT and leads Military Watch coverage for both stations. Over the years, he has taken viewers inside operations of the Navy, Marines Corps, Coast Guard, Air Force, and Army.

His memorable assignments include traveling with the Coast Guard as they flew more than 100 cold-stunned sea turtles from Cape Cod, Massachusetts to Orlando, Florida in the back of a C-130.

Fulfilling a lifelong dream in 2017, Todd took to the skies above Virginia and North Carolina when he flew with the Navy’s elite flight demonstration squadron, the Blue Angels. Todd’s proud to say it took hitting 7.4 Gs before he took an unscheduled two-second 'nap' in the back of the jet.

Outside of work, Todd finished work on his Master of Business Administration degree in 2020. In his free time, Todd is a voracious reader and he enjoys watching baseball while cheering for the Washington Nationals.