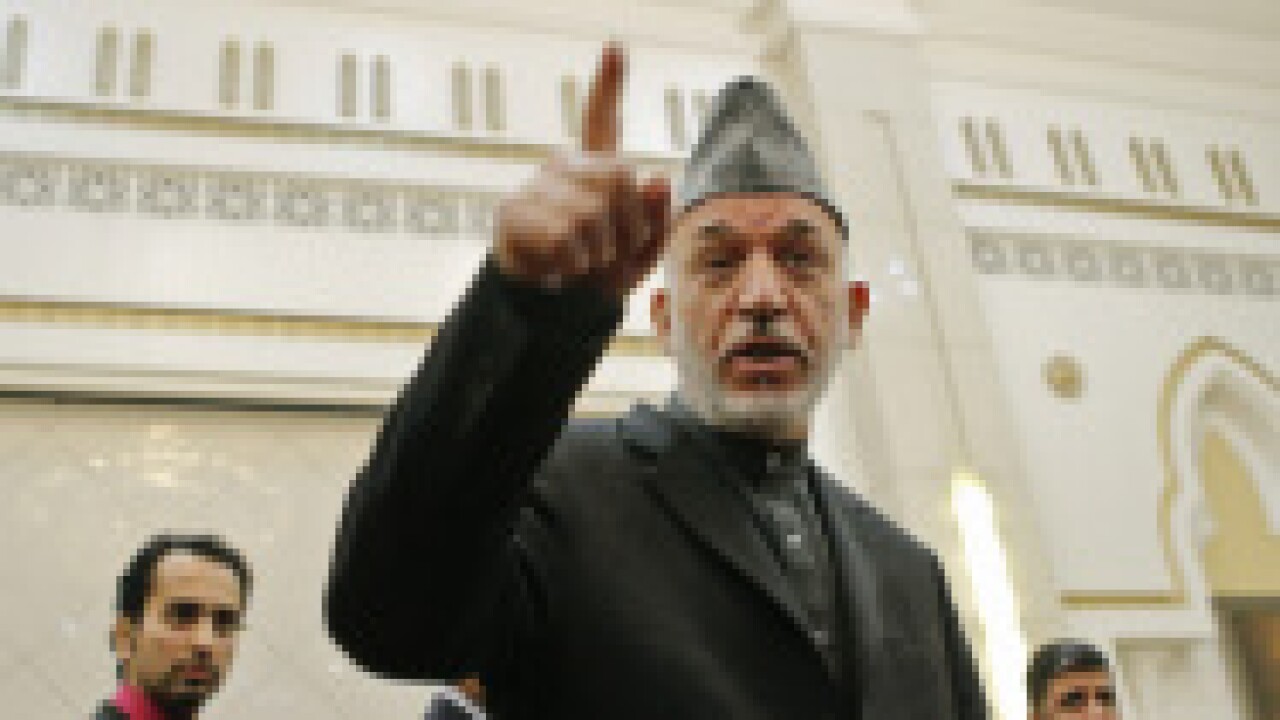 KABUL (Reuters) – Afghanistan’s President Hamid Karzai called for NATO troops to leave Afghan villages and confine themselves to major bases after the slaughter of 16 civilians by a U.S. soldier, underscoring fury over the massacre and clouding U.S. exit plans.

In a near-simultaneous announcement, the AfghanTaliban said it was suspending nascent peace talks with the United States seen as a strong chance to end the country’s decade-long conflict, blaming “shaky, erratic and vague” U.S. statements.

Karzai, in a statement after meeting U.S. Defense SecretaryLeon Panetta in Kabul, said as a consequence of the weekend massacre, “international security forces have to be taken out of Afghan village outposts and return to (larger) bases”.

The soldier accused of carrying out the shooting was attached to a small special forces compound similar to others around the country which underpin NATO’s anti-insurgent strategy ahead of a 2014 deadline for Western combat forces to pull out.

The incident has harmed relations between Afghanistan and the United States and “all efforts have to be done to avoid such incident in the future”, Karzai said, warning it also had hurt the trust Afghans had in foreign forces.

The night-time killings in Kandahar province on Sunday have raised questions about Western strategy in Afghanistan and intensified calls for the withdrawal of foreign combat troops.

The Taliban decision to suspend the talks was a blow to NATO hopes of a negotiated settlement to the war, which has cost the United States $510 billion and the lives of over 1,900 soldiers.

U.S. diplomats have been seeking to broaden exploratory talks with the Taliban that began clandestinely in Germany in late 2010 after the Taliban offered to open a representative office inQatar.

“The Islamic Emirate has decided to suspend all talks with Americans taking place in Qatar from (Thursday) onwards until the Americans clarify their stance on the issues concerned and until they show willingness in carrying out their promises instead of wasting time,” the group said in a statement.

The Taliban also said the idea of talks with Karzai’s government, which it dismissed as a U.S. “stooge”, was pointless and none had taken place. Karzai has previously said Afghan representatives had made contact with mid-level Taliban.

Earlier on Thursday, a senior U.S. general defended moving the American soldier accused of the Kandahar village killings to a military detention centre in Kuwait, saying it would help ensure a proper investigation and trial.

Furious Afghan civilians and members of parliament have demanded the staff sergeant be tried in Afghanistan over the shooting, one of the worst of its kind since U.S.-backed Afghan forces toppled the Taliban in late 2001.

Panetta, in Kabul on a two-day visit to try to soothe Afghan anger, discussed the massacre with Karzai at his heavily guarded palace and faced demands from the Afghan leader that any trial be transparent.

“I assured him first and foremost that I shared his regrets about what took place. I again pledged to him that we are proceeding with a full investigation here and that we will bring the individual involved to justice. He accepted that,” Panetta told reporters before leaving Afghanistan.

Tension has risen sharply since the killings and the burning of copies of the Koran at the main NATO base in the country last month, adding urgency to Panetta’s visit. More than 30 people died in the Koran riots around the country.

Karzai said he and Panetta had agreed to work toward a handover of security to Afghan forces in 2013, a year earlier than the 2014 deadline for the NATO pullout.

But the Afghan leader did not rule out signing a strategic agreement with the U.S. which would allow a small number of American advisers and possibly special forces to remain in the country beyond 2014.

An upbeat Panetta had earlier told reporters that he was hopeful a deal would be signed ahead of meeting of NATO leaders in Chicago in late May aimed at reaching agreement on long-term support and funding for Afghan security forces.

There was no immediate reaction from U.S. or NATO officials to Karzai’s demands, or the Taliban’s decision.

The Taliban said in its statement that the United States had only responded to its demands including the release of Taliban prisoners fromGuantanamo Bay, Cuba, with a list of conditions which were “not only unacceptable, but also in contradiction with the earlier agreed upon points”.

“So it was due to their alternating and ever changing position that the Islamic Emirate was compelled to suspend all dialogue with the Americans,” the statement said, using the Taliban’s name for itself.

The austere Islamist movement said it was fully prepared to continue its “long-term Jihadi strategies” as the traditional summer fighting months approached, following a harsh winter which had dulled fighting in several volatile provinces.

In the latest attack, a roadside bomb killed 13 Afghan civilians, including women and children, and wounded two on Thursday in the south of the country, provincial officials said.

More than 3,000 civilians were killed in thewar in Afghanistan in 2011, the fifth year in a row the number has risen, according to the United Nations.