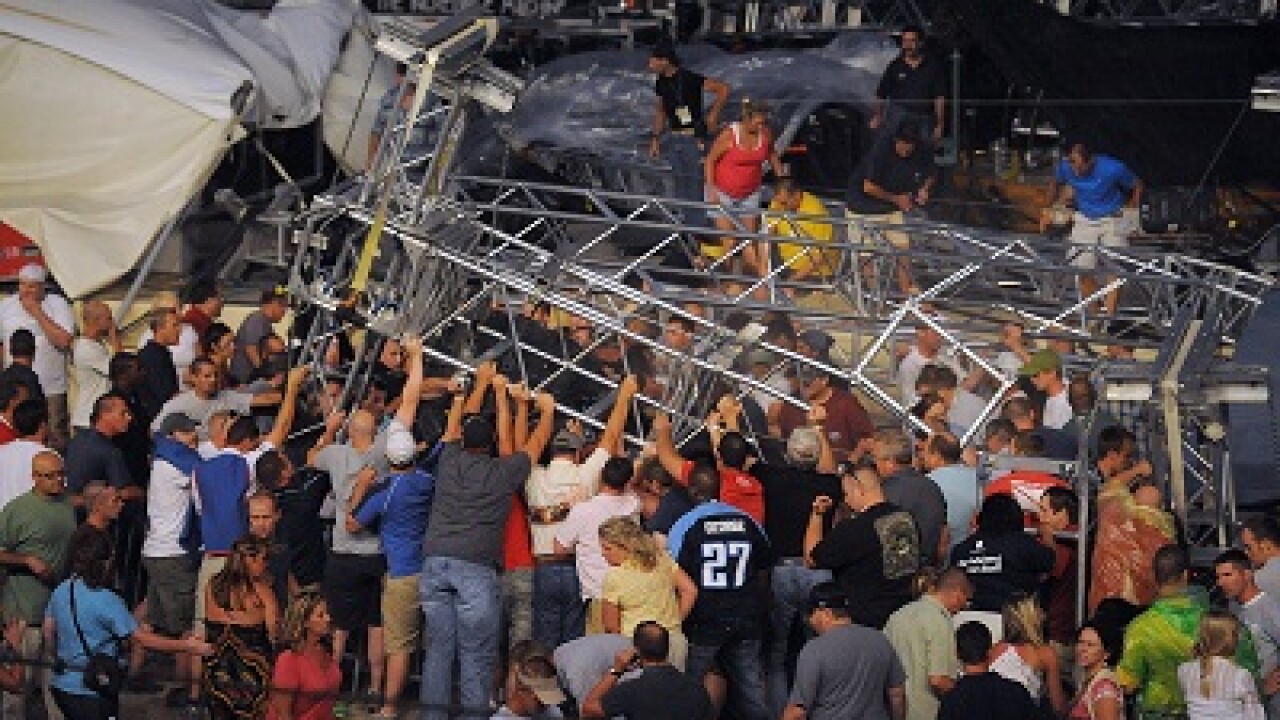 A powerful gust of wind caused a stage to collapse just before the band Sugarland was about to perform at the Indiana State Fair in Indianapolis on Saturday, August 13, 2011.

(CNN) — Jennifer Nettles, half of the country music duo Sugarland, said she was never asked to delay the band’s show at the Indiana State Fair because of an approaching storm.

She would have complied if asked, Nettles said, according to testimony given during a taped deposition.

Seven people died and more than 40 were injured last year when a storm caused a stage at the state fair to collapse, shortly before Sugarland was to perform.

Several families of victims from the August incident have filed a lawsuit against the country band, contending it was negligent.

Don Asher, general manager for a law firm that represents some of those victims, released clips of Nettles’ deposition to the media Monday. It was taped Thursday in Charleston, West Virginia.

“We’re invited to come into a place and play. It’s not our place,” Nettles said. “I don’t feel it’s my responsibility, or my management’s responsibility, to evacuate the fans in the case of danger. Do I care about their safety? Absolutely.”

She said she was not asked to postpone show and would have complied if she had been approached.

Furthermore, Nettles said she did not know whether Sugarland tour manager Helen Rollins prevented a delay or not, and was unaware of conversations that allegedly occurred about a possible postponement.

In an affidavit from a lawsuit against one company, the fair’s executive director says she twice sent the show’s promoter to talk to Sugarland in an effort to delay the show.

But in a separate document contained in a state report on the incident, Sugarland’s Rollins said no one asked the band to delay its set.

When asked why his firm chose to release the clips, Asher said: “In our opinion the deposition tells a different story than the one being portrayed by Nettles’ attorneys. They (Sugarland) could have delayed the start of the concert or sought to cancel it. They had access to Doppler radar and were aware of the storm approaching. In our opinion they (Sugarland) bear ultimate responsibility.”

The firm is also considering releasing video of the deposition of Kristian Bush, the other half of the country music duo.

Sugarland spokesman Allan Mayer responded: “We’re not sure what these lawyers think they’re accomplishing by leaking selectively edited portions of the transcripts, but we don’t think it’s fooling anyone — and it sure isn’t bringing any truth or clarity to last summer’s tragedy.

“Their self-serving assertions about what Sugarland knew or could have done are contradicted not only by Kristian and Jennifer’s complete testimony but also by the independent reports of the Indiana Occupational Safety and Health Administration and the investigators hired by the state,” he said in a statement.

In February, the Indiana Department of Labor announced penalties totaling $80,800 following a worker safety investigation into the collapse.

The largest fines — totaling $63,000 for what the agency said were three violations — were levied on Mid-America Sound Corp., which built the stage structure and leased it to the fair.

Metal scaffolding supporting the stage lights fell onto a crowd of fans and workers as a storm swept through the Indianapolis fairgrounds on August 13, 2011, right before Sugarland was to perform.