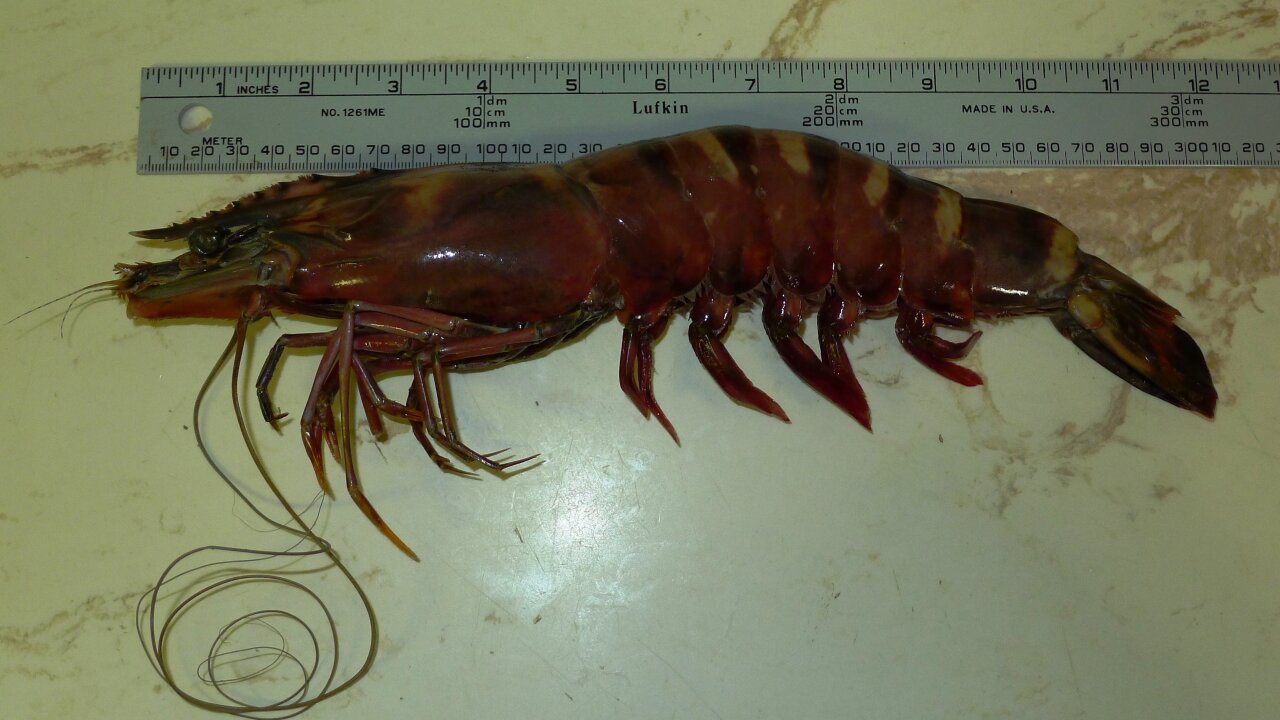 By: Doris Taylor
Posted at 9:17 PM, Apr 26, 2012
(CNN) — An invasion of giant cannibal shrimp into America’s coastal waters appears to be getting worse.

Researchers from the U.S. Geological Survey and the National Oceanic and Atmospheric Administration reported Thursday that sightings of the massive Asian tiger shrimp, which can eat their smaller cousins, were 10 times higher in 2011 than in 2010.

“And they are probably even more prevalent than reports suggest, because the more fisherman and other locals become accustomed to seeing them, the less likely they are to report them,” said Pam Fuller, a USGS biologist.

The shrimp, which can grow to 13 inches long, are native to Asian and Australian waters and have been reported in coastal waters from North Carolina to Texas.

They can be consumed by humans.

“They’re supposed to be very good. But they can get very large, sorta like lobsters,” Fuller said.

While they may make good eatin’ for people, it’s the eating the giant shrimp do themselves that worries scientists.

“Are they competing with or preying on native shrimp,” Fuller asked. “It’s also very disease-prone.”

To try to get those answers, government scientists are launching a special research project on the creatures.

“The Asian tiger shrimp represents yet another potential marine invader capable of altering fragile marine ecosystems,” NOAA marine ecologist James Morris said in a statement. “Our efforts will include assessments of the biology and ecology of this non-native species and attempts to predict impacts to economically and ecologically important species of the Atlantic and Gulf of Mexico.”

Scientists are uncertain how many of the giant shrimp are in U.S. waters.

In 1998, about 2,000 of the creatures were accidentally released from an aquaculture facility in South Carolina. Three hundred of those were recovered from waters off South Carolina, Georgia and Florida within three months.

Farming of the giant shrimp ended in the United States, but they were caught again off Alabama, North Carolina, Louisiana and Florida.

Scientists don’t know if there is a breeding population in U.S. waters. Tiger shrimp females can lay 50,000 to a million eggs, which hatch within 24 hours. Or the shrimp may be carried here by currents or in ballast tanks of marine vessels.

The latest study will look at the DNA of collected specimens.

“We’re going to start by searching for subtle differences in the DNA of Asian tiger shrimp found here — outside their native range — to see if we can learn more about how they got here,” USGS geneticist Margaret Hunter said in a statement. “If we find differences, the next step will be to fine-tune the analysis to determine whether they are breeding here, have multiple populations, or are carried in from outside areas.”