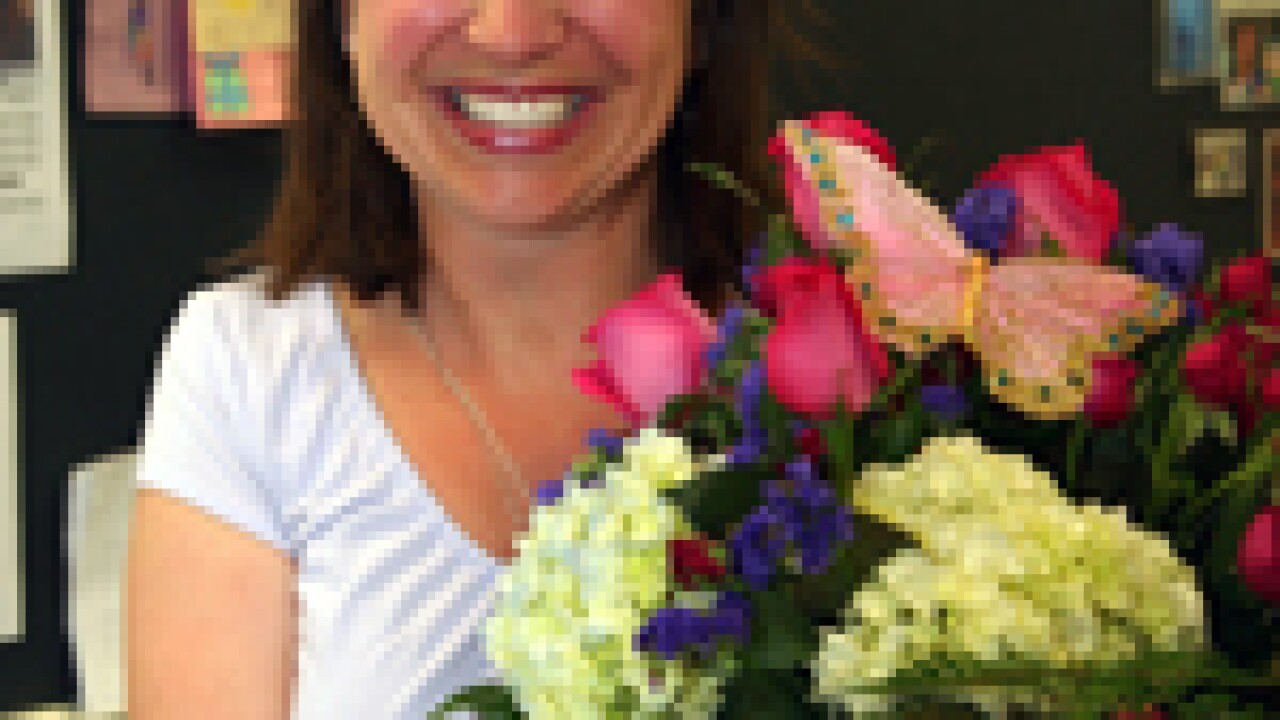 Virginia Beach City Public Schools has named its 2012 Citywide Teacher of the Year.

Here is a press release from VBCPS:

In a surprise visit made to her classroom this morning, Superintendent Dr. James G. Merrill and Assistant Superintendent for Curriculum and Instruction Joe Burnsworth made the announcement and presented German with an engraved school bell and other congratulatory gifts.

Chosen from an initial pool of 86 teachers, each representing his or her school, German was one of 10 semi-finalists selected to receive classroom visits by the Teacher of the Year Selection Committee.

The field was further narrowed when five finalists were individually interviewed by the Committee.

According to Selection Committee Chairperson Dr. Eugene Soltner, who is the principal of Great Neck Middle School, each of the finalists personifies what it is to be an excellent teacher in their creativity, empathy, and ability to motivate students and elicit their best work. “However,” Soltner said, “Mrs. German stood out in her obvious passion for teaching and her absolute devotion to her students. What the committee saw and was most impressed with was a classroom punctuated by active student engagement in a highly student-centered learning environment. Students were self-directed learners. Mrs. German was a facilitator who fostered opportunities for students to analyze, generate ideas, explain, and apply their learning. These qualities, in tandem with her professionalism and warm and engaging manner, made it apparent that Angela German was something special.”

German’s philosophy of teaching, borrowed from a much-admired college professor, is simply this: “Know your kids, know your ‘stuff’, and act professionally.” There is no doubt that this is exactly what German does, and in that order. She works tirelessly to establish rapport with her students, not only in the classroom, but also through maintaining open communications with parents through emails, phone calls, and regular progress reports. In addition, she is active in school activities, serving as a cheerleading coach, a mentor, and sponsor of the school newspaper and spelling bee. She is diligent regarding knowing her “stuff”, attending training and professional development classes to stay current in her field. Her master’s degree was earned in her content area. Finally, her professionalism is of the highest caliber. German involves herself in projects that allow her to share her expertise and skills with other teachers, not only at Plaza Middle School, but across the division. She has given numerous presentations on topics ranging from balanced assessments to Virtual Thesaurus and digital portfolios. On the regional level, she has presented to International Baccalaureate staff on authentic assessments and vertical planning.

German is a 13-year veteran teacher. She began her career in education as an English teacher and mentor at the Norfolk Marine Institute (NMI). After a year at NMI, German accepted a position with Virginia Beach Schools, first as a teacher at Open Campus High School, and then at Princess Anne High School where she taught for nine years. Her assignments included teaching English 9 core and inclusion, English 9 MYP (Middle Years Program, a prelude to the International Baccalaureate Program), and public speaking. In 2008, German accepted the position she now holds as an MYP English 8 teacher at Plaza Middle School.

German serves as a site visitor, trainer, and consultant for the International Baccalaureate Organization and also is on the faculty of the University of Phoenix. She is a sought-after presenter and speaker locally and regionally. In addition, she is active in the community as a volunteer with civic organizations and her church.