Edwards gets acquittal on one count, mistrial on others 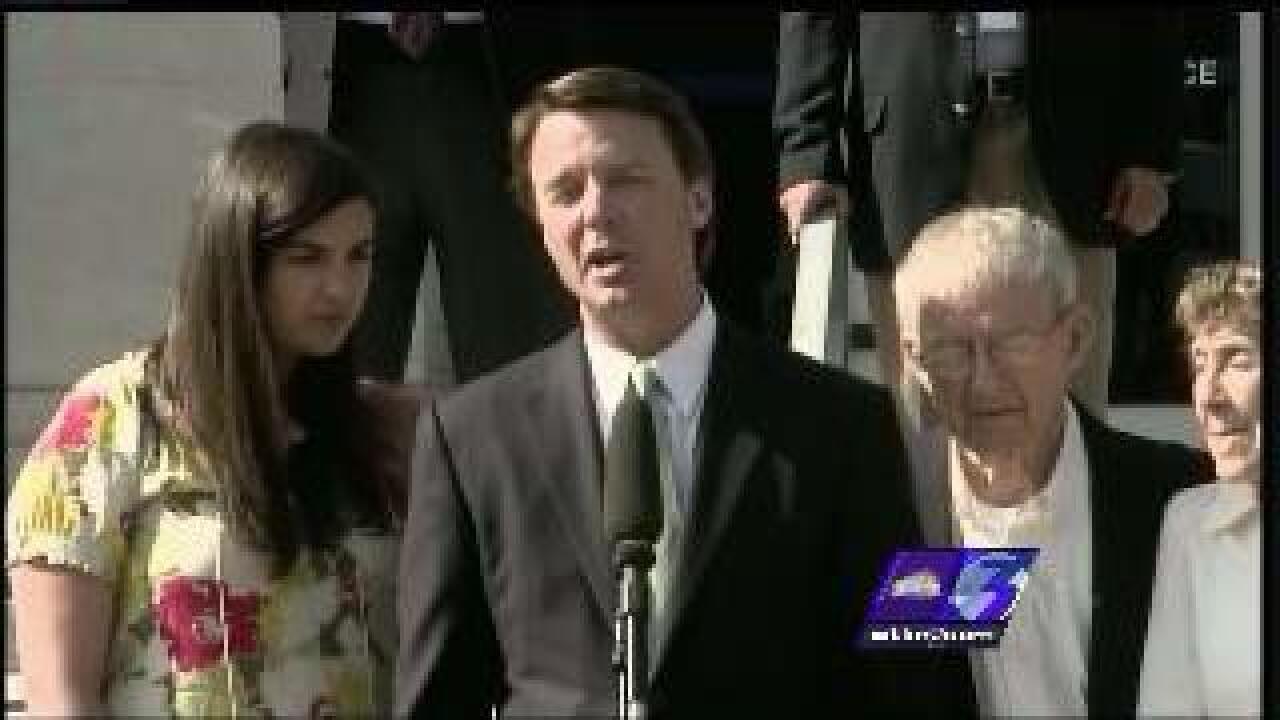 GREENSBORO, North Carolina (CNN) -- Two-time Democratic presidential hopeful John Edwards took responsibility for "my sins," including an affair that resulted in a "precious" daughter, after his federal corruption case ended in an acquittal and mistrial Thursday.

Prosecutors had accused the onetime North Carolina senator of using nearly $1 million in illegal campaign contributions to keep his pregnant mistress under wraps as he ran for president in 2008. But after more than 50 hours of deliberations over nine days, jurors cleared him of one of six counts and deadlocked on the rest.

Emerging from the courthouse with his parents and daughter Cate at his side, he said that while he never believed he committed a crime, "I did an awful, awful lot that was wrong, and there is no one else responsible for my sins."

"None of the people who came to court and testified are responsible. Nobody working for the government is responsible," he said. "I am responsible, and if I want to find the person who should be held accountable for my sins, honestly, I don't have to go any further than the mirror."

He thanked his family for supporting him, adding that "I'm grateful for all my children" -- including Cate, who sat through the trial with him, 12-year-old Jack, 14-year-old Emma and the 4-year-old girl from his affair, whom he called "my precious Quinn, who I love more than any of you can ever imagine."

Edwards had denied that he was the girl's father for more than a year, saying the affair was over before his onetime mistress, Rielle Hunter, became pregnant.

Jurors emerged Thursday afternoon to announce they had reached a decision on the one count, but none of the others. U.S. District Judge Catherine Eagles ordered them back into the jury room to continue deliberating, but declared a mistrial after they returned less than an hour later to announce the deadlock.

The result leaves prosecutors to decide whether to re-try Edwards. There was no immediate comment from the Justice Department, which prosecuted the case.

Edwards had been charged with four counts of accepting illegal campaign contributions, one count of falsifying documents and one of conspiring to receive and conceal the contributions. The charges could have carried a maximum sentence of 30 years in prison and a $1.5 million fine.

"This was a win for John Edwards, and there will be a lot of questions about why this case was brought," CNN legal analyst Jeffrey Toobin said after the announcement.

Edwards ran for president in 2004, when he ended up as the Democrats' nominee for vice president, and again in 2008. His attorneys argued he was guilty of being a bad husband to his wife, Elizabeth, who died in 2010, but had committed no crime.

They also argued that former Edwards aide Andrew Young, the government's star witness, used the contributions for his own gain and to pay for Hunter's medical expenses to hide the affair from Edwards' wife.

Neither Edwards, Hunter nor either of the two donors whose funds were in question testified during the trial. Fred Baron died in 2008, while Rachel "Bunny" Mellon -- who gave Edwards the bulk of the money -- is now 101.

Jurors last week asked to review all the exhibits, indicating they were in it for the long haul.

Prosecutors said Edwards "knowingly and willingly" took the money from Baron and Mellon to keep Hunter out of the public eye, then concealed the donations by filing false and misleading campaign disclosure reports.

The affair occurred as Edwards was gearing up for a second White House bid in 2008, and he knew his political ambitions depended on keeping his affair with Hunter a secret, Assistant U.S. Attorney Robert Higdon told jurors in closing arguments.

"There is no question it would destroy the campaign of John Edwards," Higdon said.

Edwards accepted $725,000 from Mellon and more than $200,000 from Baron, prosecutors said. The money was used to pay for Hunter's living and medical expenses, travel and other costs to keep her out of sight while Edwards made his White House run, prosecutors say.

Defense attorneys argued the donations could not be considered campaign contributions.

Prosecutors said Edwards manipulated Young and others to help keep his affair out of public view. Young testified that he allowed Hunter to move in with him and his wife at Edwards' request after newspapers began looking into a possible affair within the Edwards campaign.

Young initially claimed to be the father of Hunter's baby girl and testified that Mellon was already funding Hunter's living expenses when he called Baron to complain about the situation. Baron offered to help out, telling Young to write up Hunter's expenses so Baron could reimburse them, the aide testified.

Neither Baron nor Mellon appeared to know that the other was reimbursing Young for the same expenses, raising questions about whether and how much Young may have profited from the situation. Young acknowledged during the trial that he had used some donations for his own personal benefit, including paying for the construction of a home.

Another former Edwards aide, speechwriter Wendy Button, testified that Edwards knew Baron was supporting Hunter and her child in 2009. Defense lawyer Abbe Lowell urged jurors to focus on Young's role in the case, saying he was a biased and unreliable witness with a financial and legal interest in the outcome.

"There is nothing he won't lie about, nothing," Lowell said.

Young, the author of a tell-all book about the Edwards scandal, testified under an agreement with the government in hopes that he will not be prosecuted. Prosecutors agreed that Young made several mistakes over the years, including keeping some of the money, failing to confront Edwards earlier about his behavior and falsely claiming paternity for Edwards' child with Hunter.

But David Harbach of the U.S. Justice Department's public integrity section told jurors in a rebuttal argument that Lowell was merely trying to distract jurors from focusing on the charges against Edwards.