According to Virginia Beach police officials, an officer was involved in an accident Monday morning at 3:31 a.m. and have now arrested the other driver involved and a passenger.

Police arrested the driver Monday morning. He is identified as 22-year-old Johnathan R. Fullington, of the 4200 block of White Cap Crescent in Chesapeake, Virginia.

Police say the officer on duty was heading east on the 900 block of Virginia Beach Boulevard in the right lane. As he approached the area near Colony Traler Park, a vehicle pulled out of the parking lot to the left, and entered the left traffic lane and was driving slowly.

Officials say as the officer was passing the vehicle on the right, the driver turned in front of him from the left lane in an attempt to enter Colony Trailer Park.

The vehicle then struck the officer’s driver side, pushing him off of the road to the right and into a fire hydrant and telephone pole.

The telephone pole was cut in half.

The officer was wearing his seatbelt, and was treated and released from the hospital.

According to police, the driver of the other vehicle is now facing several traffic charges, including DUI, and possession of a controlled substance.

Police also arrested a female passenger, and they say she has an unknown number of outstanding warrants from West Virginia.

More details will be released as they become available. Stay with NewsChannel 3 for updates. 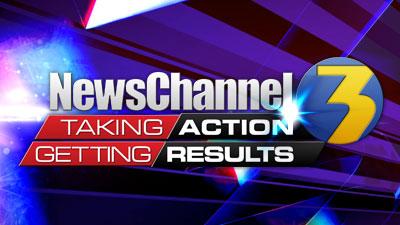