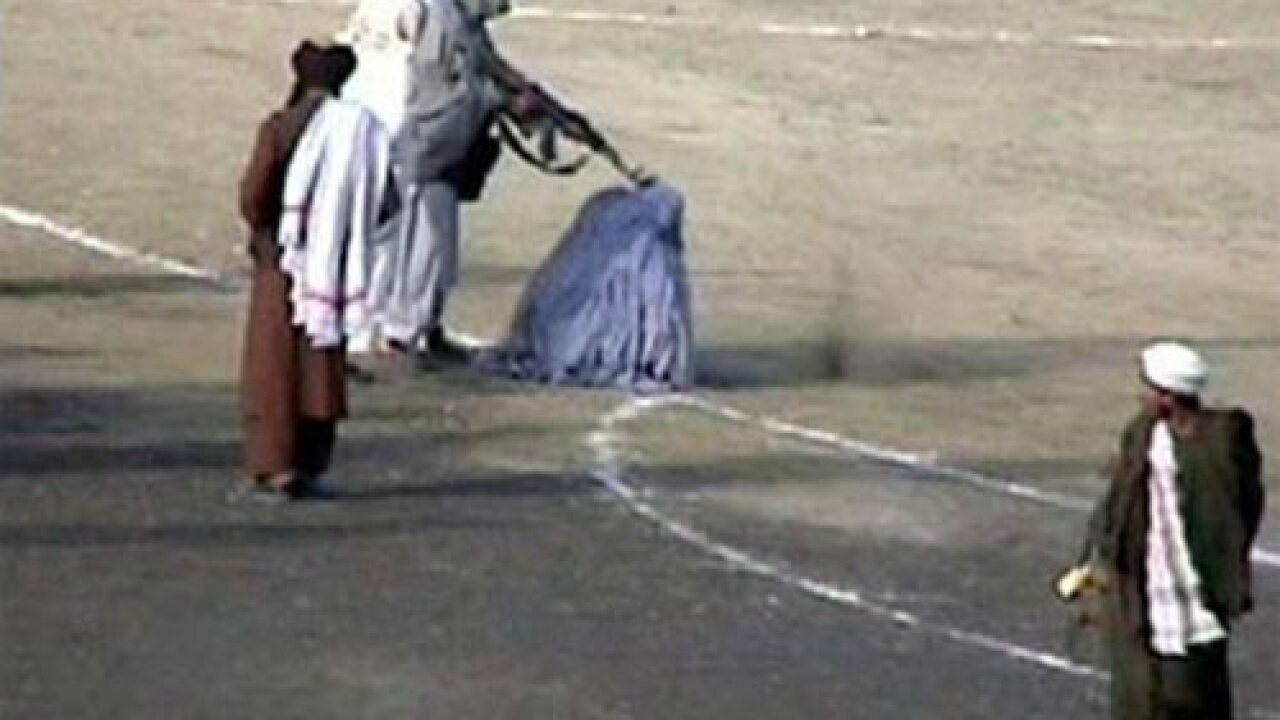 A man Afghan officials say is a member of the Taliban shot dead a woman accused of adultery in front of a crowd near Kabul, a video obtained by Reuters showed, a sign that the austere Islamist group dictates law even near the Afghan capital.

In a three-minute video, a turban-clad man approaches a woman kneeling in the dirt and shoots her five times at close range with an automatic rifle, to cheers of jubilation from the 150 or so men watching in a village in Parwan province.

“Allah warns us not to get close to adultery because it’s the wrong way,” another man says as the shooter gets closer to the woman. “It is the order of Allah that she be executed”.

Provincial Governor Basir Salangi said the video, obtained on Saturday, was shot a week ago in the village of Qimchok in Shinwari district, about an hour’s drive from Kabul.

Such rare public punishment was a painful reminder to Afghan authorities of the Taliban’s 1996-2001 period in power, and it raised concern about the treatment of Afghan women 11 years into the NATO-led war against Taliban insurgents.

The video was revealed the same day Secretary of State Hillary Rodham Clinton was in Kabul to discuss the designation of Afghanistan as the newest U.S. “major non-NATO ally,” a political statement of support for the country’s long-term stability and a solidifying of close defense cooperation after American combat troops withdraw in 2014.

“When I saw this video, I closed my eyes … The woman was not guilty; the Taliban are guilty,” Salangi told Reuters.

When the unnamed woman, most of her body tightly wrapped in a shawl, fell sideways after being shot several times in the head, the spectators chanted: “Long live the Afghan mujahideen! (Islamist fighters)”, a name the Taliban use for themselves.

Despite the presence of over 130,000 foreign troops and 300,000 Afghan soldiers and police, the Taliban have managed to resurge beyond their traditional bastions of the south and east, extending their reach into once more peaceful areas like Parwan.

Afghan women have won back basic rights in education, voting and work since the Taliban, who deemed them un-Islamic for women, were toppled by U.S.-backed Afghan forces in late 2001.

But fears are rising among Afghan women, some lawmakers and rights activists that such freedoms could be traded away as the Afghan government and the United States pursue talks with the Taliban to secure a peaceful end to the war.

Violence against women has increased sharply in the past year, according to Afghanistan’s independent human rights commission. Activists say there is waning interest in women’s rights on the part of President Hamid Karzai’s government.

“After 10 years (of foreign intervention), and only a few kilometers from Kabul… how could this happen in front of all these people?” female lawmaker Fawzia Koofi said of the public execution in Parwan.

“This is happening under a government that claims to have made so much progress in women’s rights, claims to have changed women’s lives, and this is unacceptable. It is a huge step backwards,” said Koofi, a campaigner for girls’ education who wants to run in the 2014 presidential election.

Salangi said two Taliban commanders were sexually involved with the woman in Parwan, either through rape or romantically, and decided to torture her and then kill her to settle a dispute between the two of them.

“They are outlaws, murderers, and like savages they killed the woman,” he said, adding that the Taliban exerted considerable sway in his province.

Earlier this week a 30-year-old woman and two of her children were beheaded in eastern Afghanistan by a man police said was her divorced husband, the latest of a string of so-called “honor killings”.

Some Afghans still refer to Taliban courts for settling disputes, viewing government bodies as corrupt or unreliable. The courts use sharia (Islamic law), which prescribes punishments such as stonings and executions.