President Obama will be in Hampton Roads today.

The president kicked off his re-election campaign in Richmond earlier this year. Today, he'll be in Virginia Beach at Green Run High School with Senator Mark Warner and Former Governor Tim Kaine.

NewsChannel 3 is told the president will begin speaking at Green Run High School at 12:45 p.m.

After that, all three will head to Phoebus High School in Hampton where they'll be joined by Congressman Bobby Scott. The estimated speaking time for President Obama in Hampton will be around 4 p.m.

NewsChannel 3 will be there for both events and bring you coverage thoughout the day.

Early Obama crowd is predominantly African American in a city with perhaps a 25% minority population. Va's black vote will be a big factor.

Reporters with an Obama media pass are not allowed into the public area to talk to actual people.

Obama supporter is wearing an awesome "Virginia Squires" warm-up jacket. Anyone remember them?

Obama will speak in an a space the size of what Green Run would use for a basketball game. @WTKR3 @JLarcheWTKR 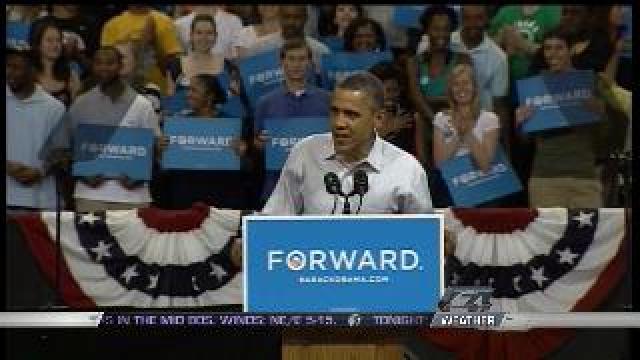