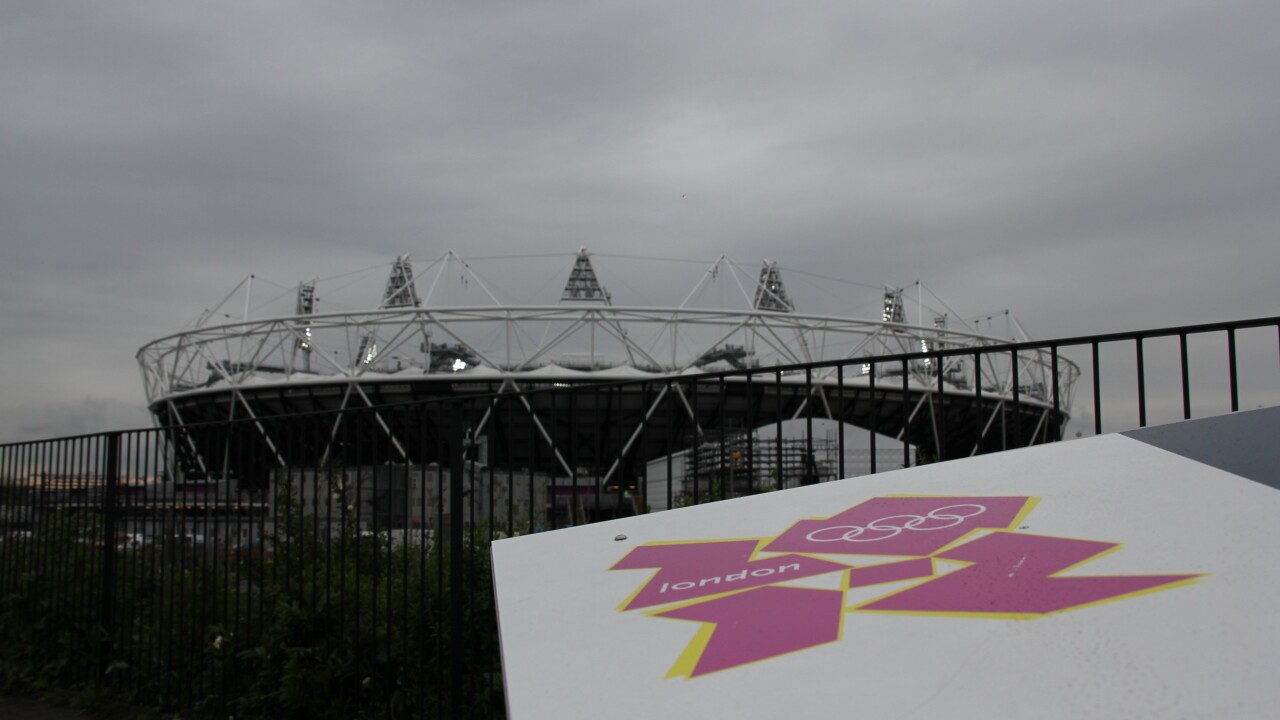 Photos of the London Olympic Park, Stadium and Orbit Tower.

The torch, which was on a boat driven by soccer star David Beckham down the River Thames, was carried into the stadium by five-time Olympic gold medalist Steve Redgrave.

He then passed it off to the young athletes, who lit part of the outer rim of the torch, setting off a domino effect as fire methodically engulfed the cauldron.

Organizers had said they expected a billion people worldwide to watch the opening ceremony — which was created by Danny Boyle, best known for directing the Oscar-winning film “Slumdog Millionaire” — on television.

Tens of thousands more congregated in “fan zones” around the British capital to watch the festivities on big screens, their enthusiasm hardly diminished by overcast sky and sporadic showers as London welcomed the world as an Olympics host for the third time.

The event opened with a scene dubbed “Green and Pleasant,” after a line from poet William Blake’s “Jerusalem,” that featured an idyllic view of a British countryside. Rolling hills, fields and rivers — complete with picnicking families, sports being played on a village green and farmyard animals — made up the elaborate set.

Hundreds of volunteers dressed in period costumes walked, danced and otherwise performed as music played. The set soon transformed into one featuring factories, recalling the Industrial Revolution, including large smokestacks emerging from below.

After a short film featuring Daniel Craig, the latest actor to play cinematic British spy James Bond, and none other than Queen Elizabeth II herself, the next performance paid tribute to Britain’s National Health Service and children’s literature.

J.K. Rowling, author of the best-selling Harry Potter books, kicked off the scene — which featured, among others, the evil Voldemort from her series and magical nanny Mary Poppins.

Next came a performance of the iconic song from “Chariots of Fire,” a tale about two British Olympians from 1924 that was lightened up by slapstick comedian Mr. Bean. Then came a showcase for pop songs from the Beatles to the Rolling Stones to Frankie Goes to Hollywood to David Bowie, which was followed by a short live performance by rapper Dizzee Rascal.

There was also a special shout-out to Tim Berners-Lee, who is credited with inventing the World Wide Web. His words, “This is for everyone” at one point lit up a part of the stands for all to see.

Just over one hour in, the Olympic athletes finally made their way into the stadium led, per tradition, by the Greek delegation.

That was followed by another performance featuring bicyclists with glowing butterfly wings going around the stadium, one of whom soared into the air.

Several dignitaries escorted the Olympic flag as it entered the stadium, among them U.N. Secretary-General Ban Ki-moon and legendary American boxer Muhammad Ali.

Sebastian Coe, chairman of the London Games organizing committee and a four-time Olympic medalist, then promised, “London 2012 will inspire a generation.”

“In the next two weeks, we will show all that has made London one of the greatest cities in the world,” Coe said. “Let us determine all of us, all over the world, that London 2012 will see the very best of us.”

International Olympic Committee chief Jacques Rogge noted the history being made with these Games — the first time any city has hosted the Olympics three times, and the first competition in which every delegation had female athletes.

Some athletes competed in advance of Friday night’s formal kickoff, including members of multiple men’s and women’s football squads. Earlier in the day, for instance, all 128 competing archers took part in a preliminary round at Lord’s Cricket Ground in London to determine seedings for team and individual competitions.

Three South Korean archers took the top three seeds in the men’s individual round, with the winner, Im Dong-hyun — who is legally classified as blind — setting a world record in the process, according to the official website for the Games.

Hours earlier, the day got off to a resounding start as bells around the country pealed for three minutes, including more than 40 chimes from London’s famous Big Ben clock tower.

The Olympic torch, which has traveled around the United Kingdom over the past 70 days, then set off on the final leg of its journey toward Olympic Stadium, aboard the royal barge Gloriana.

Rowers propelled the vessel, which played a central role in Queen Elizabeth II’s diamond jubilee celebrations, down the River Thames from Hampton Court to Tower Bridge.

Former Olympian rower Matthew Pinsent, tasked with carrying the flame on to the barge, said it was “a huge day for London.”

Crowds lined the river’s banks to cheer the torch along, adding to the more than 13 million who’ve turned out to watch it pass in the course of its 8,000-mile journey, according to the government.

Just over 7,000 of the 10,500 athletes taking part in the Games have now arrived in the United Kingdom, the British government said.

U.S. first lady Michelle Obama met with members of Team USA at a breakfast Friday morning at the U.S. Olympic Training Facility, hours before she will lead the delegation as the athletes parade at the opening ceremony.

Katie Lawrence, a resident of the U.S. state of Georgia who holds dual U.S.-British citizenship, told CNN that she was hugely excited to be in London to watch the sporting extravaganza.

“I love the Olympic Games, I always have, always will. I’m always torn as to which team to root for, but I have no shame in rooting for both USA and GB,” said Lawrence, who saw the 1996 Games in Atlanta as a child. “I cannot wait to be immersed in all of the excitement and bustle that the Games bring.”

CNN iReporter Kevin Dunscombe was “very proud” of London as the host city.

“I really felt the buzz of the Olympics when I walked through Trafalgar Square on my way home last night,” he said Friday. “The atmosphere was really electric and this is before the Games have actually begun!”

UK national newspaper headlines have heralded the day as the start of something truly special. “Get the party started,” reads the Telegraph, while the Times of London hails “The world in one city.” The Guardian strikes a more reflective note as London prepared to host the Games, saying, “Time to find out who we are.”

News reports also have picked up on the verbal to-and-fro between British Prime Minister David Cameron and Republican U.S. presidential candidate Mitt Romney, who appeared to question London’s readiness while on a UK trip — and then had to backtrack.

“You know it’s hard to know just how well it will turn out,” Romney said in an interview with NBC News on Wednesday evening. “There are a few things that were disconcerting. The stories about the private security firm not having enough people, the supposed strike of the immigration and customs officials — that obviously is not something which is encouraging.”

A day later, in what sounded like a jab at Romney’s own stewardship of the 2002 Olympics in Salt Lake City, Cameron appeared to draw a contrast between staging the Games in London versus Utah.

After meeting with Cameron, Romney praised British preparations for the Games. He then sidestepped a question about whether he intended any criticism of London in his initial comments, saying he expected the Games to be “highly successful.”

Speaking to CNN’s Piers Morgan in London on Thursday, Romney also said he was “delighted to see the kind of support that has been around the torch, for instance.”

UK media reported Friday that hundreds of disappointed people had been turned away from the archery competition at Lord’s Cricket Ground on Friday morning, after the apparent sale of some fake tickets and confusion over whether the event was open to the public.

The London organizing committee, LOCOG, said tickets had neither been advertised nor sold.

“We think we have made it very clear that this is not a free event, like the Road Races or Marathon which have been advertised as free events,” a statement said.

“This is a ranking round and there is no spectator access at all. We are dealing with this at the venue, along with some people who have turned up with fake tickets purchased from a fraudulent website.”

People are urged to “be extremely cautious and vigilant when attempting to buy tickets and only purchase from an official source,” the statement says.