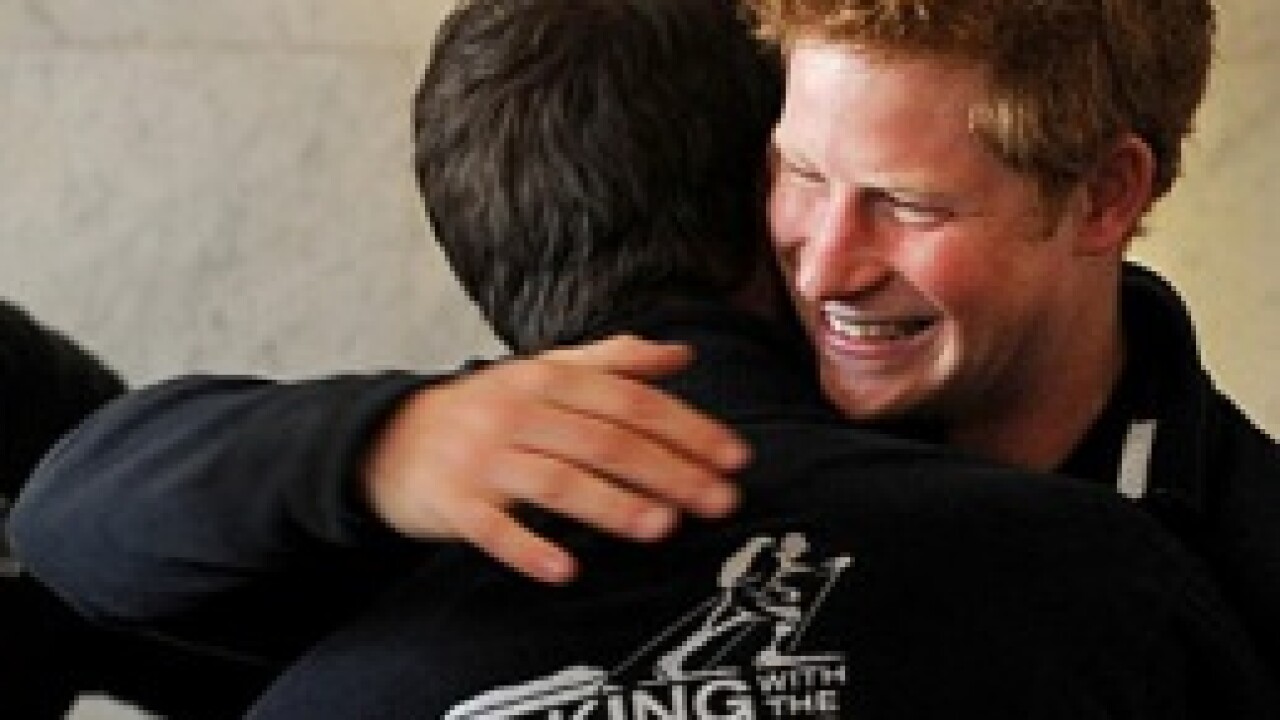 (CNN) — What happens in Vegas stays in Vegas — unless you’re Prince Harry and TMZ publishes pictures of you, or someone who looks very much like you, cavorting naked during a game of strip billiards.

One photo shows a redheaded man, who resembles Harry, stark naked but for a wristwatch and a necklace. The man’s hands cup his genitals. His face is turned toward the television set in the suite. And his body partially shields that of another person, also naked.

The necklace the man has on appears to match one Prince Harry was seen wearing poolside in Vegas on Monday.

A second picture shows the same person hugging a woman from behind next to a pool table. Both are naked.

“Harry, along with a large entourage, went down to the hotel bar and met a bunch of hot chicks … and invited them up to his VIP suite,” said TMZ, which like CNN is a Time Warner company.

CNN left messages for Clarence House, the royal home in London, but did not hear back from the press office.

A representative for the royal family told TMZ, “We have no comment to make on the photos at this time.”

“The Queen must be sooo proud that Prince Harry showed us his crown jewels!!!! Lol,” said Danielle Monaro, part of the Elvis Duran And The Morning Show, a syndicated radio program.

Last week, William helped save a teenage girl who was in danger of drowning off the coast of Wales in his role as Royal Air Force search and rescue pilot.

The 16-year-old girl was caught in a rip current and rapidly losing strength when the rescue team was called out.

William, known to his RAF comrades as Flight Lt. Wales, has been stationed at a search-and-rescue base on the remote Welsh island of Anglesey since 2010, and lives there with Catherine, the Duchess of Cambridge.

His younger brother, 27-year-old Harry, is no stranger to controversy.

In 2002, Harry faced accusations of under-age drinking and cannabis use. The young prince was a 16-year-old schoolboy at the time of the alleged incident

The allegations were made in the UK tabloid News of the World newspaper, which also reported his father Prince Charles had taken Harry to a drug rehabilitation clinic to alert him to the dangers of drug abuse.

He did not faces charges because police found no evidence to support them.

In 2005, photos of Harry — third in line to the British throne — was splashed across the front page of The Sun newspaper wearing a Nazi soldier’s uniform to a fancy dress party, accompanied by the headline “Harry the Nazi.”

He later apologized for the incident.

“I am very sorry if I caused any offense,” Harry said.

In one clip, a voice said to be Harry’s calls a soldier a “Paki,” a derogatory term for people of South Asian descent.

In another clip, the voice tells a soldier wearing a cloth on his head that he looks “like a raghead,” another offensive term for someone who wears a headdress.

Now comes this latest controversy — one that certainly gives a whole new meaning to the phrase “hanging out.”