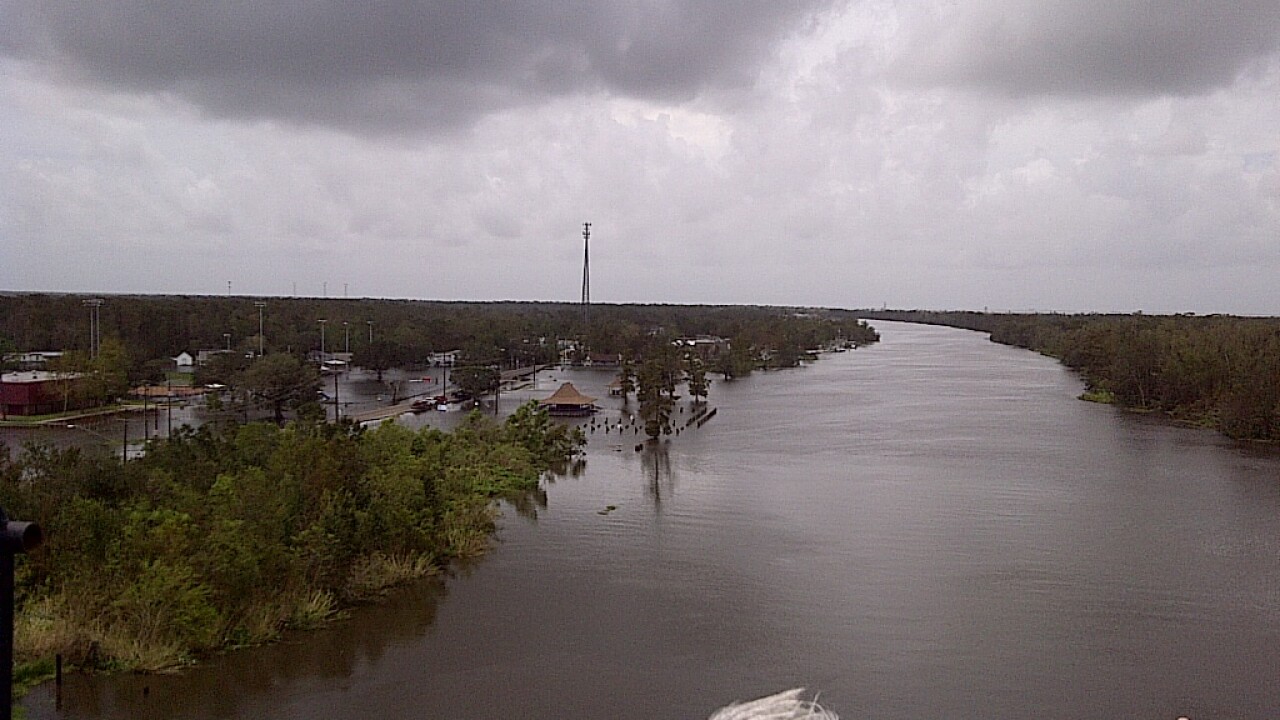 A 90-year-old man was found dead in his home in suburban New Orleans earlier in the day, Jefferson Parish Coroner Gerry Cvitanovich said, bringing the U.S. toll from Isaac to eight. The home was equipped with air conditioning, but the system didn’t work with the electricity out, Cvitanovich said.

Temperatures in the area were in the low 90s on Monday.

“It’s the very young and very old and chronically ill people that are affected,” he said. “The folks in my office are urging everyone to please check on family and get them in air conditioning or get them to a shelter.”

Obama is scheduled to get a firsthand look at recovery efforts in St. John the Baptist Parish, west of New Orleans, where thousands were forced from their homes after Isaac drove water over the banks of Lake Pontchartrain. He is scheduled to tour the parish with Louisiana Gov. Bobby Jindal and other officials.

Isaac struck the Gulf Coast south of New Orleans as a Category 1 hurricane early Wednesday, the seventh anniversary of the devastating Hurricane Katrina. The storm is being blamed for the deaths of six people in Louisiana and two in Mississippi, according to authorities in both states.

The Louisiana deaths include a man who died by falling from a tree while making preparations for the storm and another who died in a fire as the storm was hitting, said Christina Stephens, a spokeswoman for the Louisiana Office of Homeland Security and Emergency Preparedness. Another 19 people were killed in the Caribbean nation of Haiti, authorities there said.

More than 100,000 utility customers in the region remained without power nearly a week later, while nearly 3,000 people were still in shelters because of the flooding that followed.

Evacuation orders — most of them voluntary — remained in place in a number of Louisiana parishes as authorities grappled with new threats posed by rain-swollen rivers and lakes.

In St. Tammany Parish, north of Lake Pontchartrain, those threats included both the rain-swollen Pearl River and a weakened lock on an adjoining canal. Parish officials warned people to stay away from the area, but authorities lifted a mandatory evacuation order after they released water from the lock to relieve pressure.

More flood warnings were posted for parts of the Mississippi coast, where rivers north of Pascagoula and Gulfport were running high.

As of Monday morning, about 2,700 people were still registered in shelters inland from the coastal parishes, Stephens said. She said state officials were working with the Federal Emergency Management Agency and local parishes to get those residents back home or into temporary housing soon.

“Our goal is to get them back to their communities so that their children can go to school, they can return to their jobs and start rebuilding their homes,” she said. But she added, “We’re not going to kick anyone out of shelters if they don’t have anyplace else to go right now.”

In Mississippi, fewer than 100 people remained in shelters, according to the state emergency management agency.

Isaac posed the first real test to New Orleans since a $14.5 billion federal effort to reconstruct the city’s flood control system after it failed during Katrina in 2005. Katrina killed nearly 1,800 people, most when the storm overwhelmed the levee system and flooded the city.

Stephens said more than half of St. John the Baptist Parish and Plaquemines Parish, at the mouth of the Mississippi River, remain without power. Both parishes suffered extensive storm damage and flooding, she said.

In St. James Parish, between New Orleans and Baton Rouge, a dusk-to-dawn curfew was imposed after the Blind River crested at flood stage, flooding nearly two dozen homes. National Guard troops were deployed to the area to help with security and possible evacuations, Jindal’s office said.

Most of the areas hit hard by Isaac were outside the new federal levee system that was reconstructed after Katrina.

Crews in Lafitte, on the outskirts of New Orleans, were considering breaching two spots in a levee along Bayou Barataria on Monday to help drain up to 5 feet of floodwater brought by the storm surge, officials said.

State officials have promised that money from fines paid by BP over the Gulf oil spill will be used to reinforce the area levees, Lafitte Mayor Tim Kerner said.

But so far, he says, that hasn’t happened.

“Yeah, it’s frustrating,” Kerner told WWL. “It makes you feel like you’re not doing your doggone job. But I can’t help it if the Corps actually looks me in the face and promises that we’re going to get things and we don’t.”

As many in Louisiana entered their sixth day without power, frustration with the pace of restoration efforts also grew.

“Some areas are delayed due to high water conditions,” the power company said on its website.

But for Tyrone Wilson, who relies on an electric scooter for transportation, the return of power means the return of his mobility.