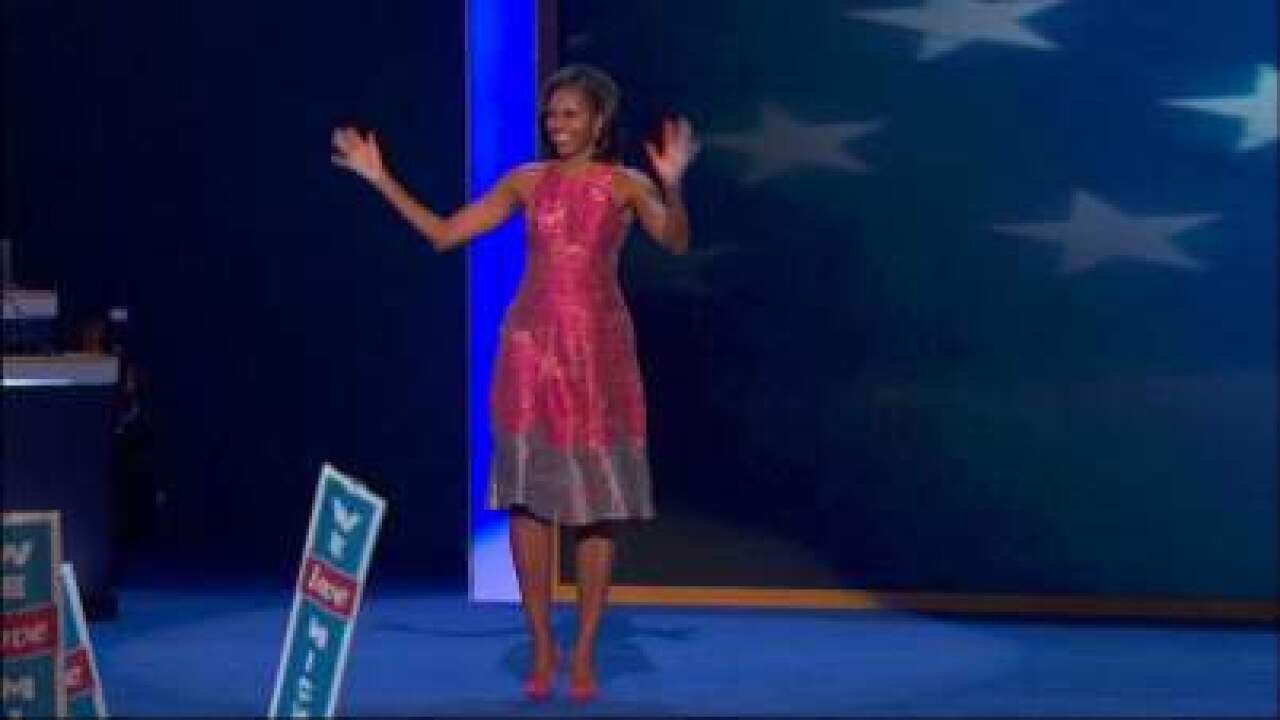 (CNN) — First lady Michelle Obama walked onto the stage of the Democratic National Convention on Tuesday night fully aware of the task at hand.

It was her job to paint her husband — the president — as a family man and as a leader with a vision for the country.

She passed with flying colors — pink and grey to be exact.

And many of them focused on what she had on.

Obama lit up the arena in a luminescent rosy pink dress with grey floral detailing. Perhaps the most physically fit of all the first ladies, she showed off her toned arms and shoulders in the sleeveless cut frock, with just a sliver of her back through a small key hole. The full knee-length skirt had an easy element of movement as she approached the podium.

The first lady turned to African-American designer Tracy Reese for the night’s dress.

She’s worn Tracy Reese on numerous occasions, including the Easter Egg Roll and her photo shoot with People Magazine.

“Michelle Obama is the epitome of grace & wisdom. Her speech was utterly inspiring…so was her dress, perfect skin and arms. #2012DNC,” tweeted Lauren Molina of New York.

And Comedy Central’s indecision feed joked: “That sound you hear is all the reporters scrambling for adjectives to describe Michelle Obama’s dress.”

Reese too took to Twitter to respond to the compliments.

“Thanks everyone for sharing this amazing moment! We are all so grateful and honored to have dressed Mrs. Obama for such a momentous speech!!!” she wrote.

Obama complemented Reese’s art with a pair of $245 rhubarb suede pumps from J. Crew, which she reportedly bought herself.

The outfit subtly reflected the Democratic Party’s support of the middle class. Most dresses on Tracy Reese’s website run between $250 and $450.

Obama’s fashion sense has long made her somewhat of an icon.

A leaf print dress she wore from White House Black Market on The View, sold out from all its locations within 48 hours of her TV appearance.

In 2009, the Council of Fashion Designers of America honored Obama with the special style award, which she now shares with the late Jacqueline Kennedy Onassis.

“She writes her own rules when it comes to fashion and I think that’s what keeps us riveted by her fashion and keeps us paying attention to her.”