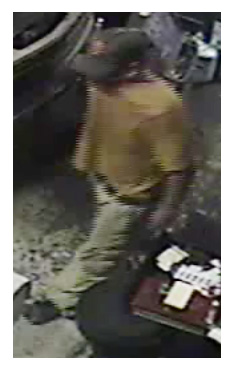 James City County police are searching for a suspect wanted for burglary of the Impact Auto Store twice in the month of August.

The shop is located on Pocahontas Trail in James City County. Police say the first burglary happened on August 22, at 10 p.m.

According to officials, the suspect broke into the business through a side window and stole money from the cash register.

He was wearing a yellow striped Polo-style shirt, khaki pants, and a baseball hat.

Police say the second burglary happened on August 25, at 11 p.m. The suspect broke into the business through same window.

On this occasion, he was wearing a blue shirt, camouflaged pants, and a brown Fedora style hat. Police found the hat and a women’s bicycle outside the business that was believed to be abandoned by the suspect.

Although the suspect is attempting to conceal his face by pulling his shirt up, police feel that someone will recognize him by his clothing.