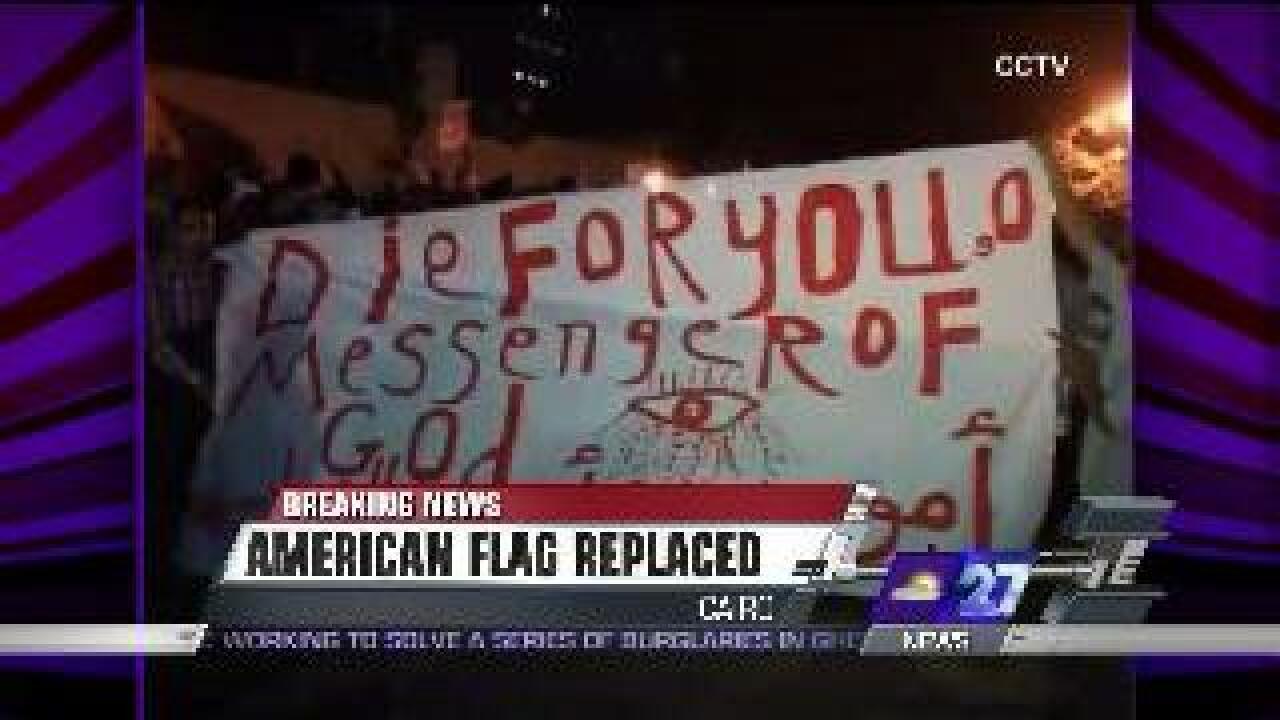 SANAA, Yemen (CNN) -- Demonstrators breached a security wall at the American Embassy in the Yemeni capital of Sanaa on Thursday, as the mission was attacked by angry protesters amid escalating anti-American sentiment.

The protests are the latest to roil the Middle East over the online release of a film produced in the United States that denigrates Prophet Mohammed.

In Egypt, riot police fired warning shots and tear gas early Thursday outside the U.S. Embassy in Cairo to keep hundreds of protesters back from the compound walls, with minor injuries reported.

The clashes follow Tuesday's attack on the U.S. Consulate in Benghazi, Libya, which left Ambassador Chris Stevens and three other consular officials dead and has heightened tensions at U.S. diplomatic missions across the region.

In Sanaa, several thousand Yemeni protesters demonstrated outside the U.S. Embassy, with some penetrating the building's security wall.

"Given recent regional developments, earlier this morning, angry protesters unfortunately flooded the security perimeter of the U.S. Embassy in Sanaa, Yemen and breached the embassy's wall," according to a statement released by Yemen through its embassy in Washington.

"Security services have quickly restored order to the embassy's complex. Fortunately no casualties were reported from this chaotic incident."

Protesters, who were reportedly unarmed, burned tires and cars outside the embassy, as well as the embassy flag.

The numbers dropped to fewer than 100 by lunchtime, after security forces managed to defuse some of the tension, but rose again to several hundred after water cannon were brought in to use against the crowds.

The security forces had earlier used batons to try to force protesters back behind barriers on the roads.

Demonstrators said they wanted to express their anger over the obscure movie after hearing of the protests in Libya and Egypt, although it was unclear how many of them have seen the offending video.

An emergency message on the website of the U.S. Embassy in Sanaa warns of the possibility of further protests in the coming days, particularly in the vicinity of the embassy, and urges Americans to leave the country.

"U.S. citizens who are already in Yemen should depart. The security threat to all U.S. citizens in Yemen remains critical," it says.

"As staffing levels at the Embassy are restricted, our ability to assist U.S. citizens in an emergency remains limited and may be further constrained by the fluid security situation."

David Hartwell of security analysis group IHS Jane's told CNN the current protests were reminiscent in some ways of the outpouring of anger witnessed in 2005 following the publication in Denmark of cartoons seen as disrespectful to Prophet Mohammed.

The violence also reflects the changed dynamic in the region following the Arab Spring, Hartwell said.

"You've got populations in all of these countries who are now much more willing to take to the streets and are much more wiling to vocalize their anger in a much more violent way," he said.

"My guess is that this outpouring of anger will be intense but brief, but I think there is a danger that this anger will spread to perhaps more unpredictable places like Afghanistan and Pakistan."