Board of Health votes to approve tougher abortion regulations without exceptions 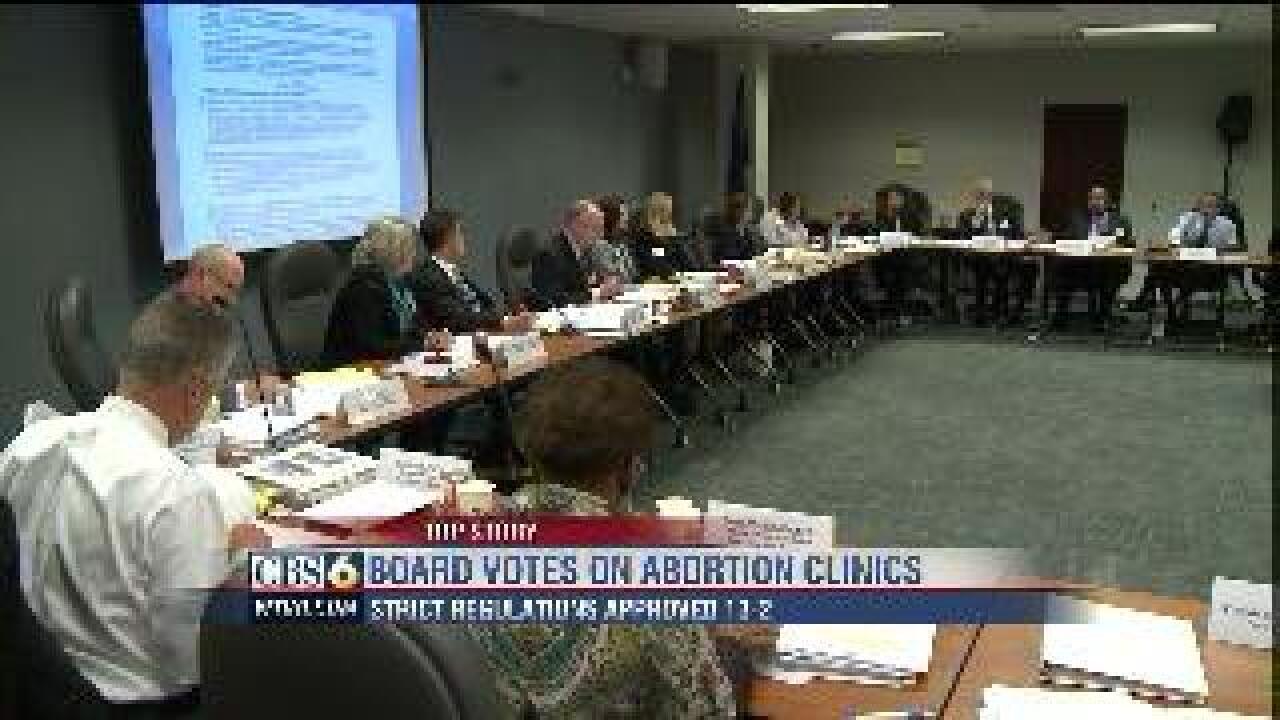 HENRICO COUNTY, Va. (WTVR) – The State Board of Health voted Friday to require all Virginia abortion clinics to meet building codes similar to those set-up for hospitals.

Today’s 13 – 2 vote in favor of the requirements reverses a June vote in which the Board of Health voted to approve the regulations, but grandfathered in 20 existing clinics from having to make costly renovations to meet the new requirements.

This means all abortion clinics in the state will be held to the similar standards as newly constructed hospitals.

Critics argued this would mean costly, unnecessary renovations designed to shutter abortion clinics in the state.

However, proponents said they believe the new requirements will keep women safe.

Virginia Attorney General Ken Cuccinelli had refused to certify that vote because he said it was not in compliance with a state law regulating clinics like hospitals.

This week Cuccinelli sent a memo to board members warning they could be denied state legal counsel and potentially be forced to pay for their own legal defense if they don’t follow his advice.

In an email to CBS 6, Cuccinelli’s Director of Communication Brian Gottstein wrote, “There have been news stories that the attorney general might not have represented individual Board of Health members if they were to be sued as individuals over the regulations they approved, if the regulations did not follow the attorney general’s legal advice to keep them within the bounds of the law that the General Assembly passed. The law on qualified immunity for members of state boards provides certain parameters as to when those board members are and aren’t entitled to have representation by the state.”

“He [Attorney General Cuccinelli] believes in encouraging citizens to serve on boards and commissions, and to do that effectively, he feels strongly that those appointed to state boards should be entitled to representation by the state if they are sued while serving in that capacity,” Gottstein email continued.

“It is deeply disturbing that Virginia’s Attorney General can act outside the scope of his legal authority, threaten and bully a Board he is charged to represent and successfully intimidate them into reversing a policy decision that the Attorney General personally disagrees with,” wrote State Senator Mark Herring (D – Fairfax) in an email to CBS 6. “This episode only underscores the need for an Attorney General who will take the politics out of the office and apply laws evenly and fairly.” Herring has announced his candidacy for Virginia Attorney General in the 2013 election.

The 15 member panel, 10 of whom were appointed by Republican Gov. Bob McDonnell, voted Friday after hundreds on both sides of the issue turned up to voice their opinion.