Sorry about that, NFL chief says of replacements 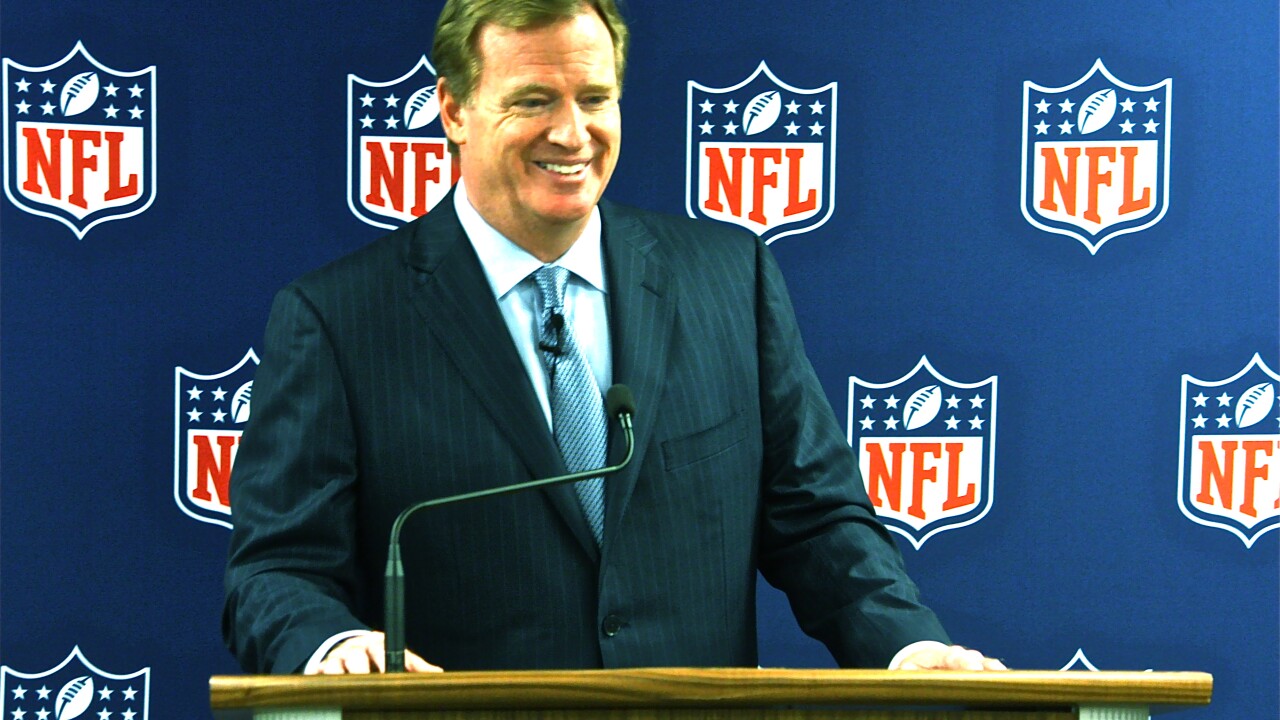 NFL Commissioner Roger Goodell at a Thursday, September 27, 2012 press conference announces the settlement with the referees.

By: Doris Taylor
Posted at 4:23 PM, Sep 27, 2012
(CNN) — The touchdown catch that wasn’t. The first touchdown interception. The inaccurate reception. Whatever you call it, don’t call the controversial call by replacement refs in the Green Bay Packers-Seattle Seahwaks game a catalyst for the tentative labor deal with National Football League referees, Commissioner Roger Goodell said Thursday.

“It may have pushed the parties farther along, but we were really in intensive negotiations for the last two weeks,” Goodell told reporters in a conference call Thursday to discuss the agreement, reached late Wednesday.

Goodell also said he was sorry the league felt it had to resort to the replacements, few of whom had any previous NFL officiating experience. Many were high school or low-level college officials who hold down myriad other jobs, from schoolteachers to attorneys.

At the same time, he declined to criticize the replacements despite weeks of botched calls that raised the ire of fans nationwide.

“Everything they did, every call, was magnified,” Goodell said. “They kept the game going. They worked hard. They trained hard. They were incredibly focused and dedicated.”

The eight-year deal — the longest ever for officials, according to the NFL — gives the union referees a pay raise and keeps their pension program in place for five years.

It suspends a lockout that began before the league’s preseason, leading to a series of gaffes that climaxed in a furor over a botched call that allowed the Seahawks to walk away with a victory in Monday night’s nationally televised game. The league acknowledged Tuesday that the Packers should have won, but allowed the result of the game to stand.

Fans and players rejoiced in the news that regular referees would return, beginning with Thursday night’s game between the Cleveland Browns and the Baltimore Ravens.

“Never thought I would be excited for the refs to come back to work but it’s about time,” Cleveland Browns receiver Josh Cribbs tweeted Thursday. “It was definitely necessary!”

In place of the replacement referees, most of whom had officiated no more than a handful of pro games, the league put together a veteran crew with a combined 70 seasons of NFL experience to handle Thursday night’s game.

Goodell said it was challenging to figure out how to get regular referees back on the field less than 24 hours after striking the tentative deal, but not for lack of enthusiasm among the officials to get back to work.

“They wanted to do what they love doing and make a contribution to the game, and that’s a tribute to them,” Goodell said.

While they have not called a game since last season, the league’s veteran crews will be ready to go, said retired official Mason “Red” Cashion.

“These guys have been working every week, really since May, to get ready for the season, through conference calls, through video, through meetings of their own,” Cashion said. “And that’s something that the officials have done simply because they have enough pride in what they do that they wanted to be ready. And they are ready.”

The agreement will also allow the NFL to hire some officials on a year-round basis and hire additional referees so they can be trained.

“This agreement supports long-term reforms that will make officiating better. The teams, players and fans want and deserve both consistency and quality in officiating,” Goodell said.

The return of the league’s regular referees won’t put an end to controversial calls, said retired NFL player Tiki Barber. But it will raise the respect level between coaches and players and officials, Barber said.

“There’s still going to be arguing with referees,” he said. “They’re still going to make bad calls. But now we’re going to know that it’s coming from a base of knowledge. These guys know what they’re talking about and they’re going to have an argument for why they do what they do on the field.”

The deal came almost exactly 48 hours after the controversial ending of the Monday night game, which the Seahawks won 14-12 after replacement officials gave possession of a disputed ball, and a touchdown, to Seattle receiver Golden Tate.

In what became a widely mocked symbol of the quality of officiating by the replacements, a photo from that game shows two officials in the end zone displaying competing signals: one indicating a touchdown, the other an interception.

The result generated intense and immediate criticism of the league — even President Barack Obama weighed in Tuesday urging a quick resolution. On Thursday, White House spokesman Jay Carney said Obama was “very pleased” with the resolution.

Goodell said he was not surprised by the outcry.

“I’ve come to learn in the NFL, particularly with the popularity of the game and the influence it has in today’s society, not much surprises me about what happens in the NFL,” he said.

Despite prodding by reporters, he declined to closely dissect the play that ended Monday night’s game beyond the statement the NFL issued Tuesday. In that statement, the NFL said the replacement refs should have called an offensive pass interference penalty on Seattle that would have ended the game, but supported the referees’ decision not to overturn the ruling on the catch.

Goodell also declined to grade the replacements, saying that wasn’t part of his duties. But he warned fans that mistakes will still happen, even with the return of the veterans.

“It’s not realistic to think that officiating will be perfect,” he said.

Much as it was after the Monday game, Twitter was buzzing with discussion of the deal. For a while, in the early morning, the name of one of the NFL’s more iconic officials, the heavily muscled Ed Hochuli, was one of the most-discussed topics among Twitter users in the United States.

“I’ve never been more excited to see another man’s biceps than this Sunday to see Ed Hochuli back officiating,” a Twitter user named Robby Donoho wrote. “It’s. About. Time.”