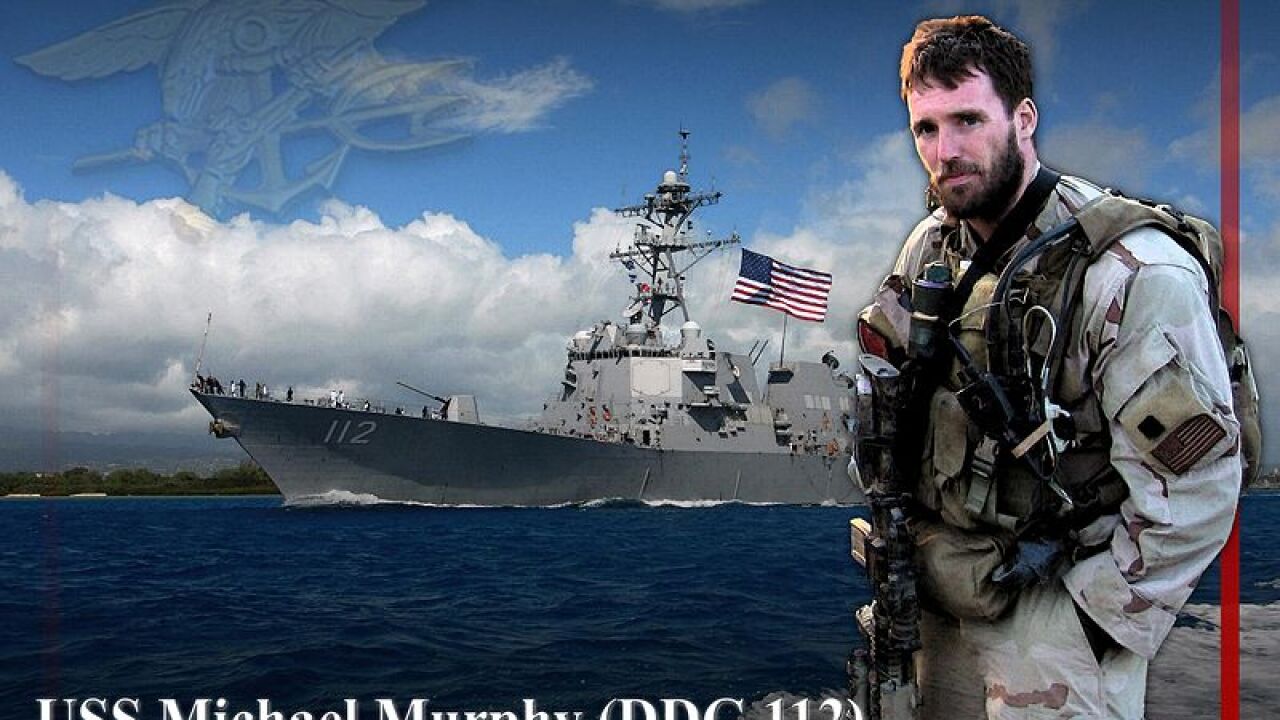 The Navy will commission its newest guided-missile destroyer, the USS Michael Murphy on Saturday at 10am during a ceremony in Manhattan, N.Y. The ceremony will be streamed live on wtkr.com.

The newest destroyer honors Navy SEAL Lt. Michael P. Murphy, who was posthumously awarded the Medal of Honor for his heroic actions during Operation Red Wings in Afghanistan June 28, 2005.

Murphy led a four-man team tasked with finding a key Taliban leader in the mountainous terrain near Asadabad, Afghanistan, when they came under fire from a much larger enemy force with superior tactical position. Mortally wounded while exposing himself to enemy fire, Murphy knowingly left his position of cover to get a clear signal in order to communicate with his headquarters. While being shot at repeatedly, Murphy calmly provided his unit’s location and requested immediate support for his element. He returned to his cover position to continue the fight until finally succumbing to wounds.

Secretary of the Navy Ray Mabus will deliver the ceremony’s principal address. Maureen Murphy will serve as sponsor of the ship named for her late son. The ceremony will be highlighted by a time-honored Navy tradition when she gives the first order to “man our ship and bring her to life!”

“This ship honors the courage, service and sacrifice of Lt. Michael Murphy, his Red Wings brothers, fellow SEALs, special operators and service members around the world who answer the call of duty every day,” said Mabus. “It is absolutely fitting that the USS Michael Murphy bears a SEAL trident on her crest because, much like Michael and every Navy SEAL who has earned the honor of wearing the trident, this ship is designed to counter threats from above and below the surface of the oceans, in the air and on land.”

Designated DDG 112, Michael Murphy is the 62nd Arleigh Burke-class destroyer, capable of conducting operations from peacetime presence and crisis management to sea control and power projection. Michael Murphy is capable of fighting air, surface and subsurface battles simultaneously and will contain a myriad of offensive and defensive weapons designed to support maritime warfare.

“USS Michael Murphy, the most flexible, lethal and multi-mission capable ship of its kind, represents the backbone of our surface combatant fleet,” said Adm. Jonathan Greenert, chief of naval operations. “It is one of the best destroyers in the world. This ship will operate forward around the globe, assuring allies, projecting power and defending our nation. And, like its namesake Lt. Michael Murphy, this ship will serve to protect, influence and win in an era of uncertainty.”

Cmdr. Thomas E. Shultz, a native of El Cajon, Calif., is the commanding officer of the ship and will lead the crew of 279 officers and enlisted personnel. The 9,200-ton Michael Murphy was built by General Dynamics Bath Iron Works. The ship is 509 feet in length, has a waterline beam of 59 feet, and has a navigational draft of 31 feet. Four gas turbine engines will power the ship to speeds in excess of 30 knots.