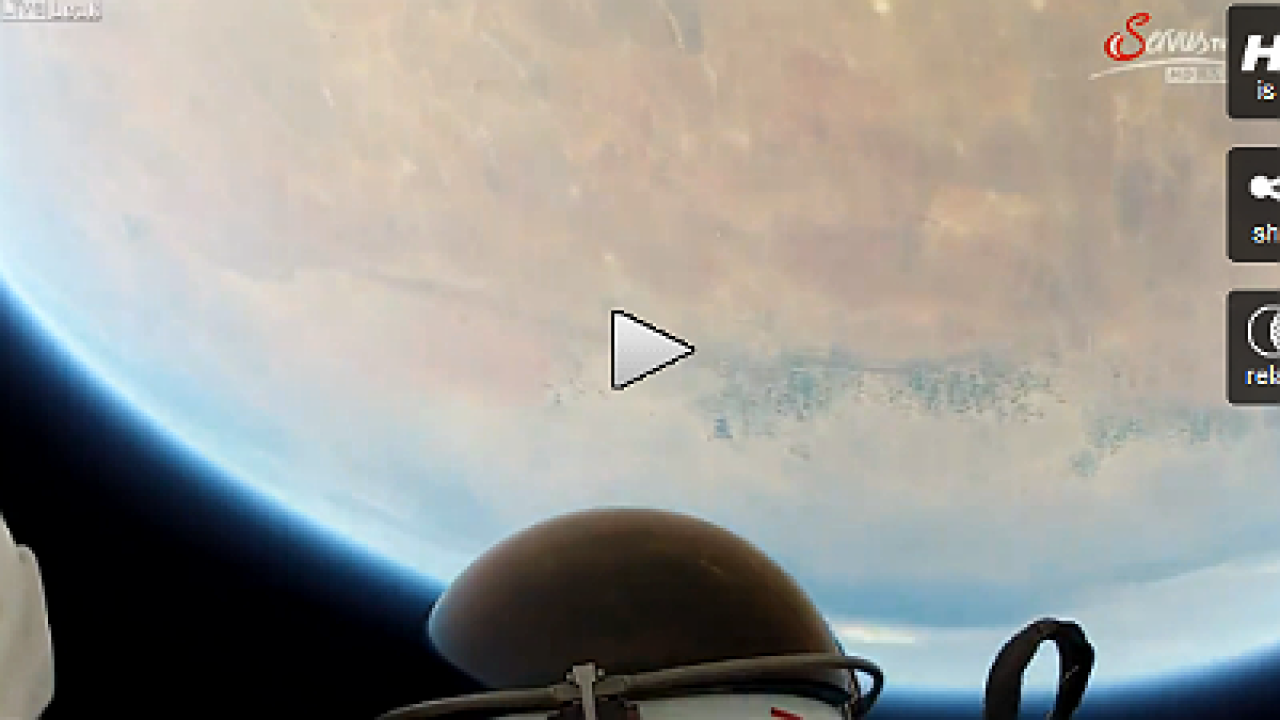 In a moment that seems likely to live forever in the annals of derring-do, Austrian daredevil Felix Baumgartner on Sunday rode a balloon to the edge of space, saluted and stepped off a platform 24 miles high with as much ease as any of us mere mortals might step off a curb.

The former soldier hurtled through the sky at up to more than 830 mph, breaking the sound barrier in a tumbling, gut-churning four-minute free fall before popping his parachute and making a running landing in the New Mexico desert.

Then he fell to his knees and pumped his fists.

“Goosebumps … Incredible!” one Twitter user posted shortly after the jump.

“My dad told me of Maradona and Neil Armstrong, I will tell my children of Ronaldo and Felix Baumgartner,” another user wrote, referring to Latin American soccer stars and the first man to walk on the moon.

While the jump was spectacle enough on its own, it also could have important implications for spaceflight.

The 100-pound pressurized flight suit and helmet Baumgartner wore to survive the lethally thin atmosphere and intense cold of near-space could also help save the lives of astronauts forced to bail out of a malfunctioning rocket on its way to space.

“It’s hard to realize what happened because there’s still so many emotions,” Baumgartner said shortly after landing. “I had tears in my eyes when I was coming back a couple of times because you’re sitting there and you thought about that moment so many times, you know, how it would feel and how it would look like.”

“And this is way bigger than I had anticipated,” he said.

Dubbed “Fearless Felix,” the helicopter pilot and former soldier had parachuted from such landmarks as the Petronas Towers in Malaysia and the Christ the Redeemer statue in Rio de Janeiro.

Baumgartner and his team spent five years preparing for Sunday’s jump, which had been postponed twice before because of weather.

By most accounts, all the hard work paid off. According to preliminary findings cited by Brian Utley, an official observer monitoring the mission, the 43-year-old Baumgartner flew higher than anyone ever in a helium balloon and broke the record for the highest jump.

Still, even Baumgartner seemed taken aback when Utley detailed how fast he had fallen at one point — 833.9 mph, or Mach 1.24, smashing his goal to break the sound barrier.

“I was fighting all the way down to regain control because I wanted to break the speed of sound,” said Baumgartner. “And then I hit it.”

After a weather delay of several hours, he set off at 9:30 a.m. (11:30 a.m. ET) Sunday from Roswell, New Mexico, in breezy, clear conditions, strapped into a pressurized capsule that hung from a giant helium balloon. It took two hours to reach his target altitude.

After running through a 40-step checklist, Baumgartner opened the hatch and climbed out onto a step the size of a skateboard.

“Guardian angels will take care of you,” said Mission Control just before he jumped.

He saluted and jumped.

He experienced a few hitches. About three minutes in, he reported, “My visor is fogging up.” Then he began to veer into a “flat spin” that threatened to send blood rushing to his head and leave him out of control.

“There was a period of time where I really thought, ‘I am in trouble,’ ” Baumgartner said, recalling how he considered pushing a button that would have released a drogue chute, slowing and stabilizing his descent — and scuttling the attempt to break the sound barrier.

“But after a couple of seconds, I had that feeling I’m getting it under control. And I did,” he added. “And that’s why I broke the speed of sound today.”

After free-falling for about four minutes and 20 seconds, he deployed a parachute for the final mile or two down to Earth.

“There’s the chute,” said a specialist in Mission Control, and the control room broke into applause.

As soon as Baumgartner landed, he dropped to his knees and raised his fists. The team at Mission Control in Roswell burst into applause.

While he and his team had prepared diligently for the jump, his survival was no guarantee.

In addition to the risk of spinning out of control, Baumgartner’s life depended on the integrity of his pressure suit. The temperature when he jumped was expected to hit 70 degrees below zero Fahrenheit or lower. And the atmosphere was so thin that his blood would have vaporized if he wasn’t sufficiently protected.

Testing that pressurized flight suit and helmet was one goal of the mission, as it could save an astronaut’s life if a manned spacecraft malfunctioned. The outfit had sensors and recorders to measure everything from his speed to his heart rate.

Sunday’s successful jump breaks the record set in 1960 by Col. Joe Kittinger, who fell from 102,800 feet as part of a U.S. Air Force mission. Kittinger was a consultant on Baumgartner’s effort, serving as the lone person from Mission Control talking to the Austrian throughout his attempt.

Kittinger acknowledged the ups and downs of the years-long effort Sunday. The former aviator was all smiles in lauding Baumgartner, who he said “did perfect,” and all the others involved in making the mission a success.

“It was a team effort, and Felix did a fantastic job,” Kittinger said. “It was an honor for all of us to work with this brave guy.”