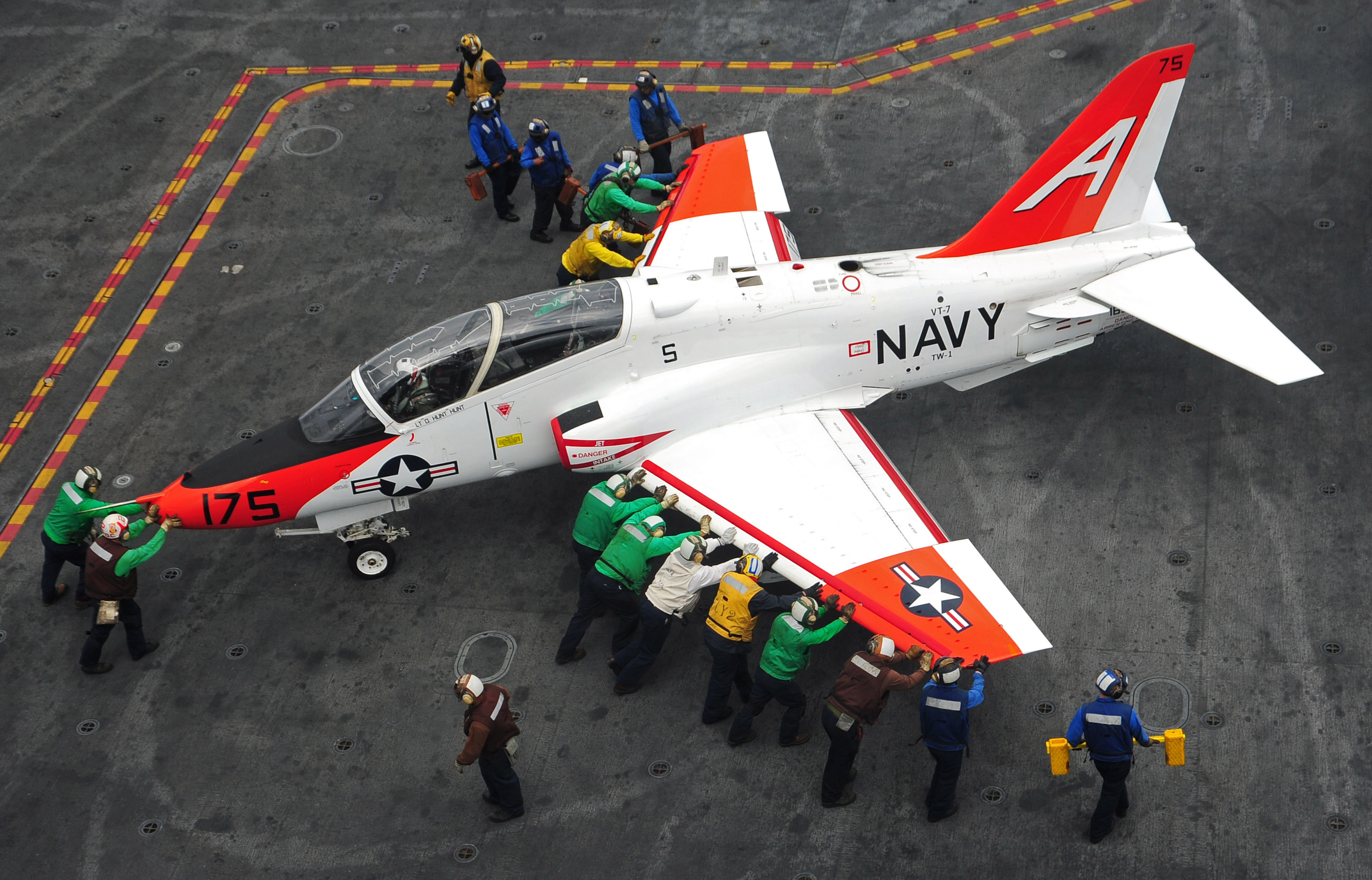 Sailors from the “Eagles” of Training Squadron (VT) 7, the “Tigers” of VT-9, the “Redhawks” of VT-21 and the “Golden Eagles” of VT-22 embarked aboard Truman to conduct their first traps.

To achieve their carrier qualifications, the students must perform 10 traps and four touch-and-gos over the span of two days.

“We are here to guide the students as they make their first landings,” said Lt. Cmdr. Dave Shuster, VT-9’s operations officer and landing signal officer (LSO). “They were all alone in the cockpit when they trapped for the first time, we were here to ease their minds and mitigate the nervousness of seeing a moving runway.”

Even though their first carrier landings were intimidating, Shuster said, the prospective pilots cast aside their anxiety long enough to successfully complete their first traps.

“It was very exciting and terrifying at the same time,” said Lt. j.g. Jason Barnes, a student naval aviator from VT-21. “The runway is a lot smaller than what we’re used to and it’s moving. It was an odd feeling to land aboard a carrier, but I can definitely see myself doing it for 20 years.”

“Landing aboard a carrier for the first time was pretty intense,” said Marine 1st Lt. Jared Shaker, a student naval aviator for VT-22. “I was expecting it to be challenging and the landing definitely lived up to my expectations. It’s an experience that can’t be simulated.”

The student aviators operate the T-45C Goshawk, the U.S. Navy’s version of the British Aerospace Hawk that is used for intermediate and advanced portions of the Navy and Marine Corps pilot training program for jet carrier aviation and tactical strike missions.

The Goshawk is outfitted with an integrated training system which includes the aircraft, operations and instrument fighter simulators, academics and training integration system.

Student naval aviators are typically assigned to a training squadron for one year before they transfer to fleet replacement squadrons (FRS), where they will learn to operate aircraft they will be utilizing in the fleet.

“We train the student naval aviators to get their wings,” said Shuster. “We teach them about carrier aviation by providing specialized training based on our experience in the fleet. Our job is to get them ready before they transfer to their FRS.

“The standard is high, and we have the best training in the world to help us meet that standard,” said Shaker. “You can’t do this type of flying anywhere else in the world, and I’m glad I get to be part of it.”

Shuster said being aboard Truman gives the students a chance to get comfortable with underway flight operations.

“These students are preparing for a very important job,” said Shuster.

“They will eventually be carrying out a primary mission of an aircraft carrier through power projection, which is vital to war-fighting efforts, so efficiency and experience are key.”

The squadron members expressed gratitude for the chance to embark aboard Truman to complete their qualifications.

“We all appreciate the opportunity to land on the ship and we are grateful to the crew for supporting us,” Shaker said. “Truman’s crew has been very professional and helpful. We couldn’t ask for a better ship to train these pilots.”