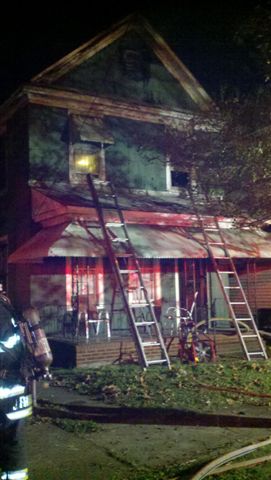 On Friday morning, officials tell NewsChannel 3 crews were sent to a house fire in the 1200 Block of 30th Street in the East End of the city. It happened around 1:30 a.m.

According to Stephen C. Pincus, Newport News Fire Department Battalion Chief, the call came in at 1:29 a.m. Fire crews arrived four minutes later to find smoke and flames coming out of the second floor, the attic area, and the roof. Crews began an aggressive interior fire attack and quickly brought the fire under control at 1:56 a.m.

The cause of the fire is being attributed to an electrical problem.

There is significant damage to the second floor and the attic area. Damage is estimated to be in excess of $20,000. The house is condemned.

Crews say a smoke detector did not sound off during this fire. The fire was discovered only because one of the residents was still awake and heard a ‘popping’ sound. She then alerted the other sleeping occupants, allowing them to be able to escape without injury.

Officials say, had the resident not been awake and alert, there may have been no early warning of the fire to the others who were sleeping in the home.

The Newport News Fire Department would like to remind everyone that smoke detectors save lives. Test your detectors monthly and follow the manufacturer’s instructions on when and if to change the batteries.

The NNFD will install free smoke detectors for any Newport News homeowner.

Please call the “Smoke Detector Hotline” at 926-8009 to make arrangements.