Virginia Beach, Va. - Police are now searching for a suspect after two pizza shop employees were shot during a robbery early Tuesday morning.

On Tuesday, December 4, 2012, shortly after 2 a.m., Virginia Beach police responded to the Chanello's Pizza in the 1000 block of Aragona Boulevard for a report of two employees who had been shot during a robbery. 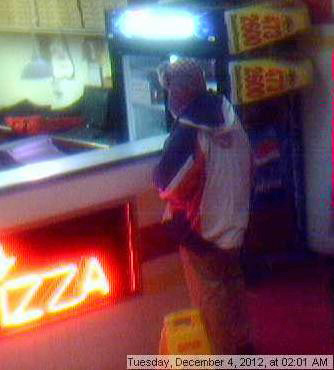 Both victims were transported to a local hospital and treated for non-life threatening gunshot wounds, police say.

The suspect is described as a white male, 40 to 45 years of age, thin build, and 140 to 160 pounds. He was wearing a gray, orange, and blue polyester jacket, khaki pants, a gray winter trapper hat, and plastic framed sunglasses.

Investigators are asking that anyone with any information about this crime call the Virginia Beach Crime Solvers Office at 1-888-LOCK-U-UP or text VBTIP with your information to CRIMES (274637). Callers and texters remain anonymous and are eligible to receive a cash reward of up to $1,000 if their information leads to an arrest.