Viagra: ‘The little blue pill that could’ 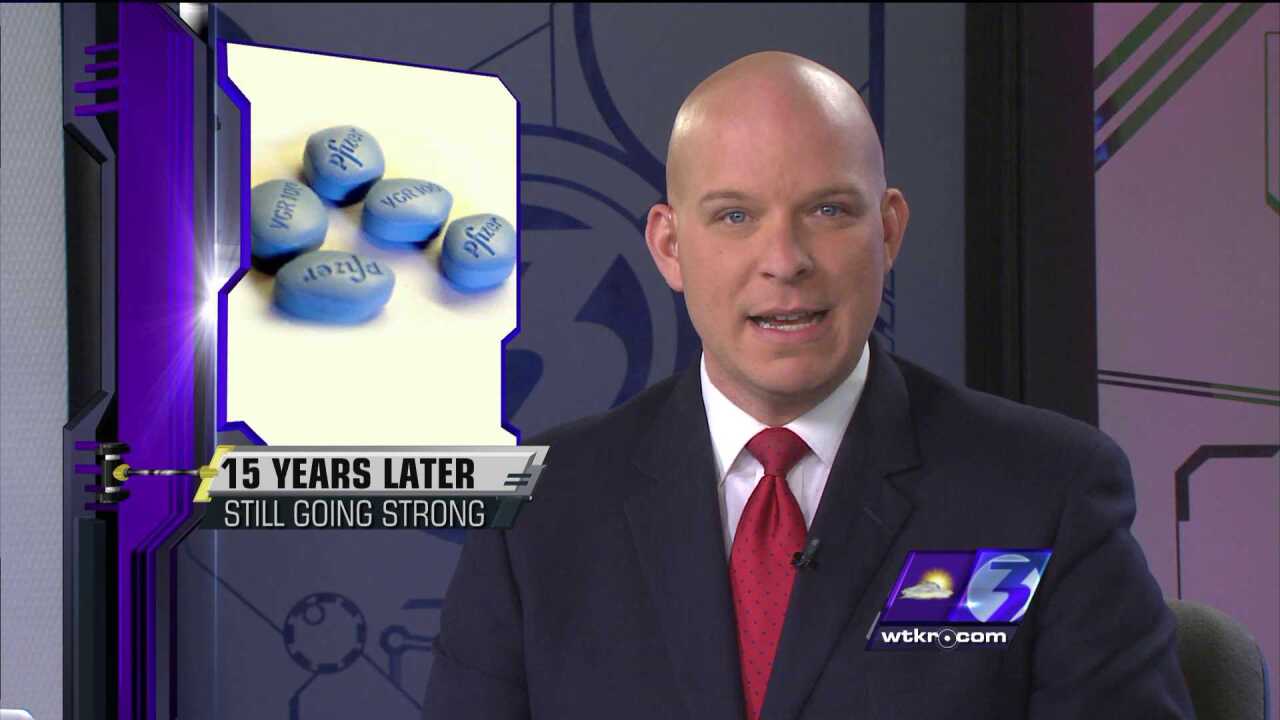 (CNN) — Fifteen years ago, men who were suffering from impotence received a beacon of hope in the form of a little blue pill.

Wednesday marks the 15th anniversary of Viagra’s FDA approval in the United States. Viagra currently holds 45% of the sexual dysfunction market share, with competitor Cialis in close second, according to industry researcher IMS Health. There were 8 million Viagra prescriptions written in 2012 with total sales of about $2 billion.

But how did a drug that was originally tested for the treatment of heart problems end up in bedrooms across America? Take a look back at Viagra’s history.

1989: British Pfizer scientists Peter Dunn and Albert Wood create a drug called sildenafil citrate that they believe will be useful in treating high blood pressure and angina, a chest pain associated with coronary heart disease. The drug is classified as UK-92480.

1991: Dr. Nicholas Terrett is named in the British patent for sildenafil citrate, or Viagra, as a heart medication. Terrett is often considered the father of Viagra, according to ViagraBox.com.

Early 1990s: Pfizer completes several early trials of sildenafil citrate that provide little hope for its use as a heart disease treatment. But volunteers in the clinical trials are reporting increased erections several days after taking a dose of the drug, according to researcher Ian Osterloh.

“Around the same time, other studies were revealing more information about the biochemical pathway involved in the erection process,” he writes for Cosmos magazine. “This helped us understand how the drug might amplify the effects of sexual stimulation in opening up the blood vessels in the penis. With UK-92480′s chances of treating angina now slim, we decided to run pilot studies in patients with erectile dysfunction.”

March 1998: The FDA approves the use of the drug Viagra to treat erectile dysfunction. In the following weeks, experts estimate, U.S. pharmacists dispense more than 40,000 Viagra prescriptions.

May 1998: TIME magazine’s cover story, “The Potency Pill” quotes Penthouse publisher Bob Guccione as saying he believes Viagra will “free the American male libido” from the emasculating doings of feminists. Feminists are not amused.

June 1998: Newsweek calls Viagra the “hottest new drug in history almost everywhere in the world.” At the time Viagra is only legal in the United States, Brazil, Morocco and Mexico, but Newsweek reports growing black market sales in other countries.

December 1998: Pfizer announces it has hired Bob Dole for a television campaign aimed at raising awareness of male impotence.

The Washington Post reports that the CIA is using Viagra to gain friends in Afghanistan. “While the CIA has a long history of buying information with cash, the growing Taliban insurgency has prompted the use of novel incentives and creative bargaining to gain support in some of the country’s roughest neighborhoods, according to officials directly involved in such operations.”

2000: Dr. Sanjay Kaul presents research at the 49th Annual Scientific Session of the American College of Cardiology that suggests 522 patients died while taking Viagra in the first year the drug was on the market.

“Our data appear to suggest that there’s a relatively high number of deaths and adverse cardiovascular events associated with the use of Viagra. I want to emphasize that in no way are we trying to imply a cause-and-effect relationship,” Kaul told WebMD at the time.

November 21, 2003: The FDA approves pharmaceutical company Lilly USA’s tadalafil, or Cialis, for the treatment of erectile dysfunction. The side effects for Cialis are similar to Viagra, and men with heart problems or abnormal blood pressure are advised against taking it.

2006: Rush Limbaugh is detained at a Florida airport after a bottle of Viagra is found in his luggage. The name on the prescription bottle does not match his. Limbaugh’s attorney says his doctor had prescribed the Viagra under a different name “for privacy purposes,” according to Forbes.

2010: Actor Michael Douglas makes headlines when he admits to AARP magazine that he has used erectile dysfunction drugs with wife, actress Catherine Zeta-Jones. “Bless her that she likes older guys,” he says. “Some wonderful enhancements have happened in the last few years — Viagra, Cialis — that can make us all feel younger.”

2011: A federal judge extends Pfizer’s U.S. patent for Viagra, making sure generic brands cannot come to market until 2019, according to the Wall Street Journal.

April 2012: The FDA approves a new erectile dysfunction drug called avanafil, which will be sold under the brand name Stendra. Stendra is taken on an as-needed basis 30 minutes before sexual activity, according to a news release.