Accomack County, Va. - State police say a couple arrested Monday night is responsible for a 'majority' of the 77 arsons and two attempted arsons on the Eastern Shore since mid-November.

Out of the 77 listed arsons, 16 of them were in Parksley.

State Police: “This is the beginning of the end.”

40-year-old Tonya Bundick and 38-year-old Charles R. Smith III, who also goes by the alias Charles Applegate, were arrested Monday night near the scene of an arson on Airport Drive in Melfa.

State Police surveillance units allegedly observed Bundick drop off Smith in her minivan at the abandoned building, and watched Smith start a fire in the building before Bundick picked him up. Police stopped the pair near the scene of the fire.

The pair's motive for setting the fires is not yet known. Smith admitted to setting most of the fires and said Bundick helped him, according to arrest warrants filed in the case.

Court documents say Charles R Smith has 31 felony charges over his life, including forgery charges in Accomack County. All the offenses happened in January of 1994 and he was arrested on January 28, 1994

He was convicted in June of 1994 and was given a 3-year sentence, all of it suspended.

So far Bundick and Smith each have charged with one count of arson and one count of conspiracy to commit arson.  State police say they expect to file charges in most of the other arson cases soon.

“We are not shutting down and going home," said Virginia State Police spokesperson Corinne Geller.  "There’s still a lot of investigative work to do. This is the beginning of the end. We're shifting now to analysis of evidence."

Smith's aunt tells NewsChannel 3 the two live together on Matthews road in Hopewell with Bundick's two children from a previous relationship and planned to get married in May.

She says Applegate owns Charlie's Auto Body off Daugherty Road in Tasley and is a former fire captain with the Tasley fire department. State police say Smith was not a member of any fire department during the times the fires were set.

Several of the fires were set on the same street as the couple's home.

Eastern Shore firefighters from 12 different departments have spent over 3,700 hours fighting the arsons, and State Police received over 1,200 tips during the investigation.

“I want to express my sincere appreciation to the residents of Accomack County,” said Accomack County Sheriff Todd Godwin. “Our residents have been so supportive and patient throughout a very extensive and arduous process of investigating these arsons. We especially thank our Eastern Shore residents for all the calls and tips they have provided over the past five months related to these crimes.”

The investigation remains ongoing at this time. Anyone with information about Smith and relating to the arsons or just the arsons in general is still encouraged to call or text the Accomack County Arson Tip Line at 757-655-1437.

Check back with wtkr.com and watch NewsChannel 3 more updates on this developing story. 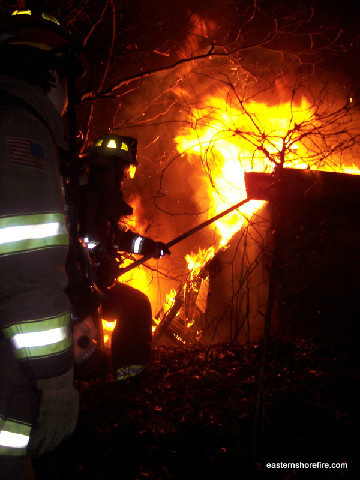