The USS Arlington joins the fleet

With an estimated crowd of more than 5,000 on hand here today, USS Arlington (LPD 24) was commissioned and joined the Navy’s fleet of 283 warships, in an emotional, patriotic ceremony.

The ship is named for the county of Arlington and honors the first responders and the 184 victims who died when American Airlines Flight 77 crashed into the Pentagon Sept. 11, 2001.

“LPD 24 bears a name of great significance to our Navy and Marine Corps team,” wrote the ceremony’s keynote speaker, Commandant of the Marine Corps Gen. James Amos, in his congratulatory letter to the ship.

“LPD 24 will forever represent the courage, devotion and teamwork that characterized our military and first responders on that modern day of infamy.”

Arlington is the eighth in Navy’s San Antonio class of ships, designed to be the most survivable amphibious vessels ever put to sea. The ship combines 21st century amphibious shipbuilding and warfighting technologies to support current and future Marine Corps aircraft and landing craft, capable of transporting nearly 1,200 Sailors and Marines into harm’s way.

“As a son of a history teacher, I always teach our Sailors about our heritage,” said Arlington Commanding Officer Cmdr. Darren Nelson. “We are here to make sure no one ever forgets those who lost their lives that day giving us our name. It is our duty to have the strength to fight terrorism, honor those that have gone before us and maintain the fortitude to continue the fight as long as necessary.”

On display during the ceremony and follow-on tours, the ship’s 684-foot flight deck boasted a Marine MV-22 Osprey, UH-1 Huey, AH-1 Cobra and CH-53 Sea Stallion. Arlington’s bow, brow and lifelines were adorned with red, white and blue bunting, and on the pier, more than 100 Sailors and Marines stood at attention in full service dress blues.

The highlight of the commissioning occurred when Arlington’s sponsor, Mrs. Joyce Rumsfeld, ordered the Sailors and Marines to “Bring this ship to life!”

“Aye, aye, Ma’am!” they roared back in unison, before running single file up the brow to man the rails from the flight deck to the forecastle and render a salute to the ceremony’s attendees, and to America.

Arlington is at their service.

“Not only does this vessel reflect the longstanding and vital relationship between our sea service and the Arlington community, it also carries on a tradition of naval excellence, forged by the crews of the two ships to bear the name previously,” Amos noted. “As the Saipan-class Light Aircraft Carrier AGMR-2 and the Cape Johnson-class transport AP 174 did before her, this new amphibious transport dock will write her chapter in our nation’s illustrious warfighting history.”

The ceremony was attended by more than 50 members of the USS Arlington (AGMR 2) Association, nearly 200 first responders and their families who performed emergency medical, police and firefighting services at the Pentagon on Sept. 11, 200, and 30 family members of those who perished that day.

He recalled reading a newspaper article, nearly a decade ago, that described the eventual addition of three 9/11 commemorative ships to the Navy’s inventory, including the USS New York (LPD 21), USS Somerset (LPD 25) and one to be named Arlington.

“I wrote a letter to the secretary of the Navy, stating that our association would like to create a strong bond between the crews of the Viet Nam-era Arlington and the new Arlington,” he said. “I never dreamed it would actually blossom into this.”

Built by Huntington-Ingalls Industries shipyard in Pascagoula, Miss., Arlington’s keel was laid on May 26, 2008, and she was christened on March 26, 2011. With a projected service life of 40 years, she was delivered to the Navy on Dec. 7, 2012. 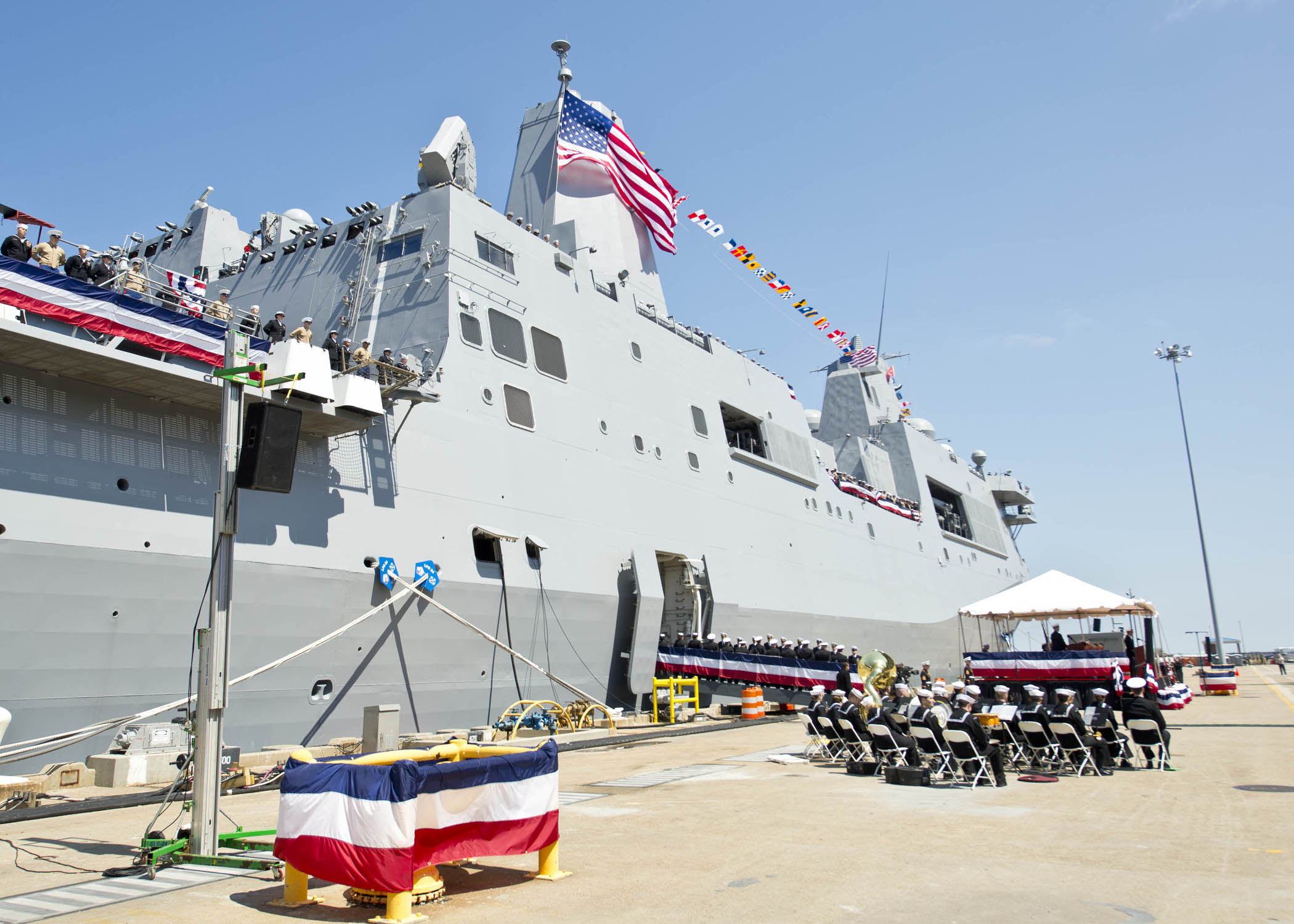