Update: Woman discharged from hospital after getting ejected during deadly charter bus crash

UPDATE: One of the victims who was ejected from a Hampton-University bound charter bus last week has now been discharged from the hospital. The other victim   died on the scene.

Capron, Va. - One of the victims who was thrown from a Horizon Coach Lines charter bus during a fatal crash last week has now been discharged from the hospital.

The driver was charged with reckless driving after the bus overturned Friday morning on Route 58 in Capron, Virginia. One person was killed.

The driver has been identified as 62-year-old Larry Brocks of Raleigh, North Carolina.

More charges could be pending after the investigation officials say. 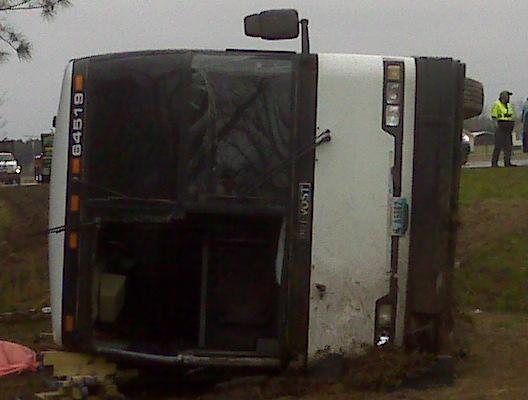 Police say the vehicle lost control and ran off the right side of the road, overturning in a ditch.

The bus was transporting eight passengers and the driver. Two passengers were ejected from the bus. One died of injuries at the scene, and the other was flown to Sentara Norfolk General Hospital.

The deceased man has been identified as 58-year-old Doval Emmanuel Watson of Chapel Hill, North Carolina.

NewsChannel 3 spoke with Watson's children who both attend Hampton University. They say their mother, Theresa Watson, is being transported to Norfolk General. She is listed in critical condition.

They say their mother works with students at Chapel Hill to get them ready for college. She was bringing a group of them to open house.

Check back on WTKR.com for updates as they come in to our news desk.