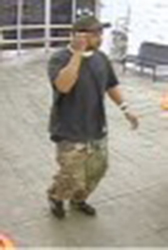 Suffolk, Va. – Police are looking for suspects involved in an armed robbery at the Walmart located in the 6200 block of College Drive.

One of the suspects was seen carrying a handgun as he fled the store. A third suspect was also believed to be involved, but no photos are available.

The suspects were described as black males. Police say the first suspect had a medium complexion and was wearing a camouflage baseball cap, black T-shirt with a white bandanna tied around his neck, camouflage tactical-style pants and dark tennis shoes. He also had a moustache and a tattoo on his right forearm. Police say the second suspect had a dark complexion and had ‘stubble’ facial hair. He was wearing a dark and light gray striped hoodie with a white tank top underneath, dark jeans and dark colored tennis shoes with red laces.

Anyone with information is asked to contact Crime Line at 1-888-Lock-U-Up. When calling Crime Line, callers do not have to give their names or appear in court. If information leads to an arrest, the caller could qualify for a reward of up to $1,000.