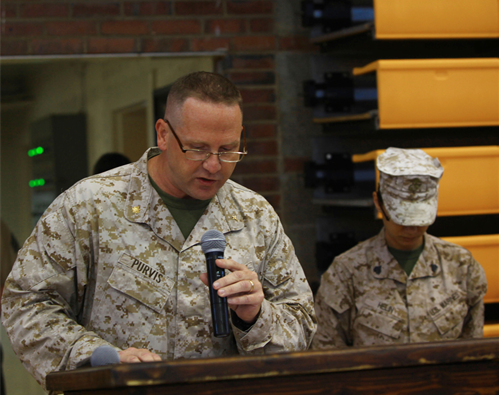 Camp Lejeune, N.C. – A Marine was issued a Silver Star Medal on April 30th, only the 41st Marine to receive the medal for his actions in combat during Operation Enduring Freedom.

His award citation reads that he cleared a 40-meter path on his hands and knees to a fellow Marine after the team member was struck by an explosive device.

Upon reaching the victim, he treated the Marine’s wounds before turning him over to a corpsman for continued treatment.

Ridgeway then began clearing a 100-meter by 100-meter landing zone so his team member could be evacuated.

After the team member was evacuated, his unit came under fire and he continued to clear more paths for his team and disarmed five more improvised explosive devices.

According to an article posted by 2nd Marine Logistics Group, Ridgeway fought back tears as he gave thanks to his mentor, Gunnery Sgt. Ralph “E.J.” Pate, an explosive ordnance disposal technician who was killed in action in 2011.

“ … He gave me the training and tools I needed to disarm IEDs as if it were easy,” Ridgeway said.

Ridgeway is currently assigned to Wounded Warrior Battalion-East and says he will continue to wear the uniform that he is so proud of.