Norfolk, Va. – The Navy made history today with the first catapult launch of an unmanned drone from an aircraft carrier at sea.

“Today we saw a small, but significant pixel in the future picture of our Navy as we begin integration of unmanned systems into arguably the most complex warfighting environment that exists today: the flight deck of a nuclear-powered aircraft carrier,” said Vice Adm. David Buss, commander, Naval Air Forces, the Navy’s ‘Air Boss’.

The X-47B Unmanned Combat Air System demonstrator (UCAS-D) launched from the deck of the George H.W. Bush at 11:18 a.m. and performed several low approaches to the carrier before flying safely across the Chesapeake Bay to land at Naval Air Station Patuxent River, Md., after a 65-minute flight.

Buss called the launch a “watershed event” in naval aviation and said he expects that decades from now, a future Air Boss will have a picture of the X-47B launching from Bush behind his or her desk just as he has a picture of aviation pioneer Eugene Ely’s first-ever landing on the deck of a ship in 1911 behind his desk today.

Completing another important first for the program, the team demonstrated the ability to precisely navigate the X-47B within the controlled airspace around an aircraft carrier at sea and seamlessly pass control of the air vehicle from a “mission operator” aboard the carrier to one located in the Mission Test Control Center at NAS Patuxent River for landing. 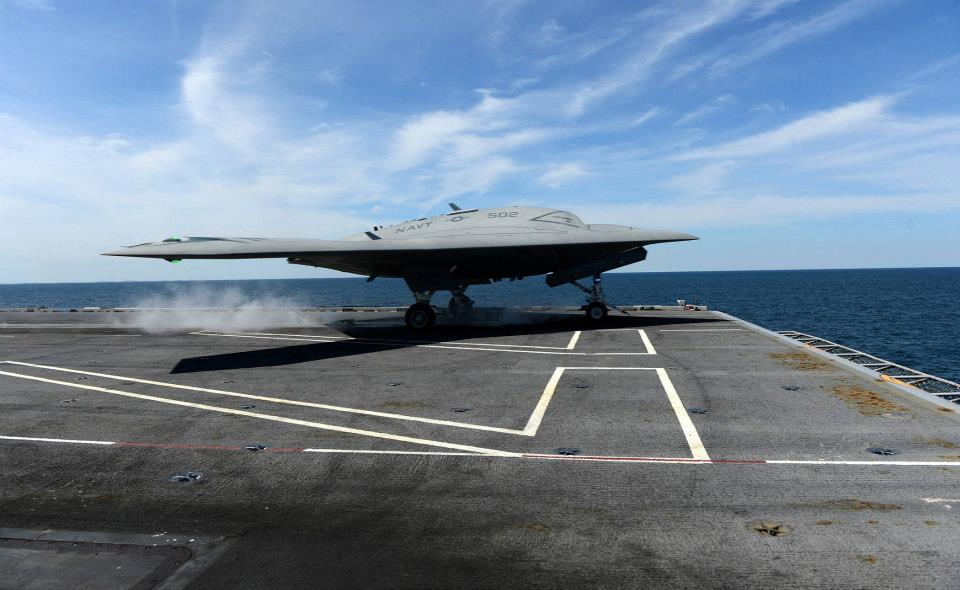 “The flight today demonstrated that the X-47B is capable of operation from a carrier, hand-off from one mission control station to another, flight through the national airspace, and recovery at another location without degradation in safety or precision,” said Matt Funk, lead test engineer for the Navy UCAS program.

Prior to the catapult launch on Tuesday, the UCAS test team also conducted deck-handling and ship-integration testing to demonstrate the capability to safely operate the X-47B in the dynamic, unforgiving environment of an aircraft carrier flight deck.

“This event is a testament to the teamwork, professionalism and expertise of everyone involved with X-47B program,” said Rear Adm. Mat Winter, program executive officer for Unmanned Aviation and Strike Weapons. “Their work will positively impact future unmanned aviation development for years to come.”

Over the next few weeks, the X-47B aircraft will fly approaches to the ship multiple times and eventually land on the pitching flight deck, said Navy UCAS Program Manager Capt. Jaime Engdahl.

The UCAS team will conduct additional shore-based testing with the X-47B at NAS Patuxent River in the coming months before its final carrier-based arrested landing demonstration later this summer.