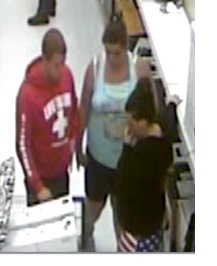 On July 2, 2013 at 3:30 p.m., three suspects entered the Walmart store located at 2021 Lynnhaven Parkway and took two computers without paying for them.

The male suspect and two female suspects selected two desk top computers and walked around the store for a few minutes. The suspects then transferred the items into a storage container, police say.

Police are asking for the public’s assistance in identifying the suspects.

Callers remain anonymous and could be eligible for up to a $1,000 reward if their information leads to an arrest.