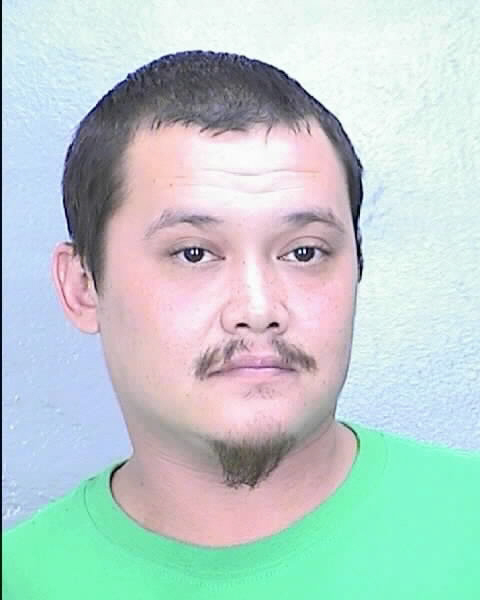 Newport News, Va. – Two men have been arrested and charged with causing more than $15,000 in damage to a Newport News school athletic field, police tell NewsChannel 3. Police are also searching for a woman who is facing charges in the case.

It happened at about 1:25 a.m. on Thursday, September 5, 2013. Police responded to the 600 block of Harpersville Road to a report of a pick-up truck “doing donuts” in the athletic field at Peninsula Catholic High School.

The responding officers were not able to immediately find the truck. However, the officers quickly received information regarding the truck’s location and found it in a nearby wood line.

Officers found a man and a woman with the truck. As they were speaking with the couple, a second man walked up to the officers.
The woman was arrested for being drunk in public, police say. All three were issued summonses for trespassing on school property.

The follow-up investigation revealed the damage to the turf and to a soccer goal totaled approximately $15,600.

On September 11, 2013, warrants for one count each of felony destruction to property, conspiracy to commit a felony, and misdemeanor damage to turf were obtained for each of the three suspects, says Lou Thurston, Newport News Police Spokesperson.

At about 3:30 p.m. on September 11, 2013, 25-year-old Dustin Robert Engstrom of the first block of Sir Francis Wyatt Place in Newport News turned himself in at Police Headquarters; he was arrested.

At about 5:25 p.m. on September 11, 2013, 28-year-old James Alexander Crawford was arrested at his home in the first block of Church Road in Newport News.

Police have been unable to locate 26-year-old Nicole Christine Vitantonio. Her last known address is in the 12700 block of Sandpebble Circle in Newport News.

Anyone who may know the whereabouts of Nicole Vitantonio or who has any additional information regarding this case is asked to call Newport News Crime Line at 1-888-LOCK-U-UP. Crime Line callers may remain totally anonymous and could be eligible for a cash reward for information leading to an arrest.