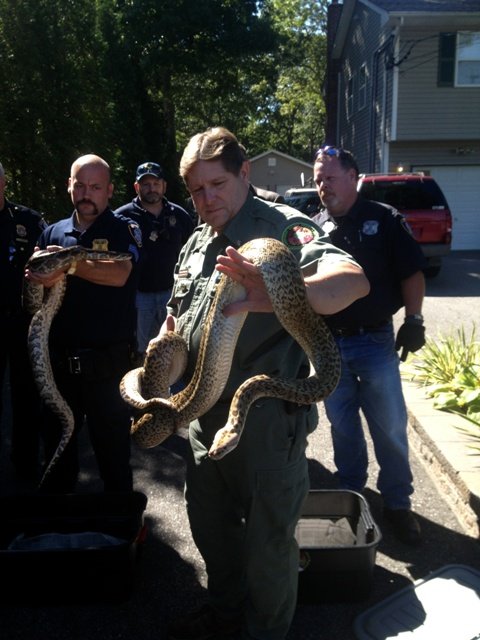 (CNN) — An animal control officer on disability kept 850 snakes, including two 6-foot Burmese pythons, while running an illegal snake business out of his suburban New York home, according to authorities who made the discovery on Thursday.

Richard Parrinello, of Brookhaven, New York, kept the snakes in his detached garage, all neatly stacked in containers and at the right temperature, according to Roy Gross, chief of the Suffolk County SPCA.

Burmese pythons are illegal in New York, and Parrinello’s were taken from the house to a reptile sanctuary in Massachusetts while the rest of the snakes are still in his garage, according to Jack Krieger, communications director for the Town of Brookhaven on Long Island.

Gross said all the snakes appeared to be in good health and there was no animal abuse or neglect.

“It was a well-maintained facility, it was very clean and organized, it was a business,” Krieger said.

Parrinello kept an online website, “Snakeman’s Exotics,” which advertised a collection of pythons, boa constrictors and hognose snakes available for sale both domestically and internationally.

After weeks of investigation into alleged workers compensation fraud, the town of Brookhaven, the U.S. Fish and Wildlife Service, the New York State Department of Environmental Conservation, Suffolk County Police and the SPCA executed a search warrant in Parrinello’s home, where he lives with his wife and 10-year-old son, according to a news release from Brookhaven.

Undercover investigators spoke to Parrinello, who claimed to have $500,000 in inventory stored on the premises, including snakes, turtles and turtle eggs, the news release said.

Authorities also say they found a few tarantulas and a couple of freezers with frozen mice and alligator carcasses.

Krieger said Parrinello wasn’t arrested or charged with any criminal activity, but he was running a business out of his residence in a residential area, which is a violation of the town code.

“What makes this case especially egregious is that this individual was allegedly operating this reptile business out of his home, posing an unknown threat to the neighbors of this community,” said Brookhaven Supervisor Ed Romaine.

The U.S. Fish and Wildlife Service has banned the importation of Burmese pythons, along with three other exotic snake species and their eggs.

While the pythons can run to double-digit lengths, University of Florida wildlife ecologist Frank Mazzotti said the average snake runs about 6 to 9 feet. They have no known predators.