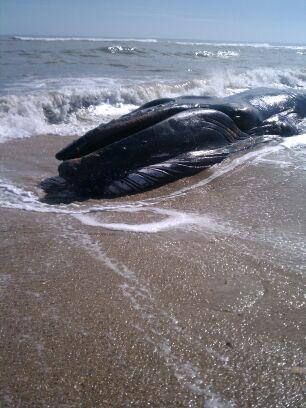 A 30 foot long humpback whale died Thursday morning after being stranded on Cape Hatteras National Seashore in the Outer Banks, according to Karen Clark of the OBX Marine Mammal Stranding Team.

The stranding team responded around 12:30 p.m. Thursday, October 17, 2013, and found the whale rolling around in the surf.  Crews were unable to get close enough to determine what sex the whale was because of its movement.

The whale was reportedly still alive at 7 p.m. Wednesday night; by 7 a.m. Thursday morning, it was dead.