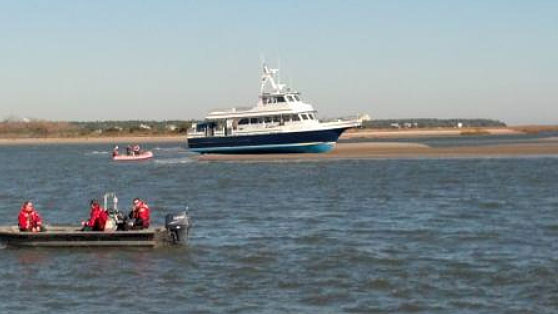 Update: The Bald Head Island Ferry Adventure was pulled free during high tide around 8:30 a.m. by the tugboat Cape Hatteras from the Moran Towing Company.

The ferry was then towed up the Cape Fear River to Wilmington Marine Center.

The Coast Guard oversaw the re-floating and are working to determine the cause of the grounding.

A passenger ferry ran aground Tuesday near Battery Island, North Carolina, injuring passengers and a crew member, the U.S. Coast Guard and the ferry line said.

Of the 31 people on board, one was flown to a hospital and 13 others were taken to regional hospitals, CNN affiliate WWAY reported.

The 64-foot boat came to a sudden stop at about 9 a.m., which threw people around, leading some to crash into tables, a passenger told WWAY.

The Adventure Ferry was heading from Southport to Bald Head Island at the time, CNN affiliate WECT reported.

The Coast Guard and other agencies responded to the scene.

As to why the ferry ran aground, she said, “We’re still in the fact-gathering mode.”

The crew of the Bayberry used their shallow water skiff to medevac 14 passengers from the 64-foot ferry and transfer them to the life boat and response boat. The injured passengers were then taken to Deep Point Marina.

Partner agencies from Bald Head Island, Towboat US and the Brunswick Sherriff’s department helped recover the non-injured passengers and transferred them to the Bald Head Island Ferry Ranger.

Additional details are forthcoming and will be posted as they become available.