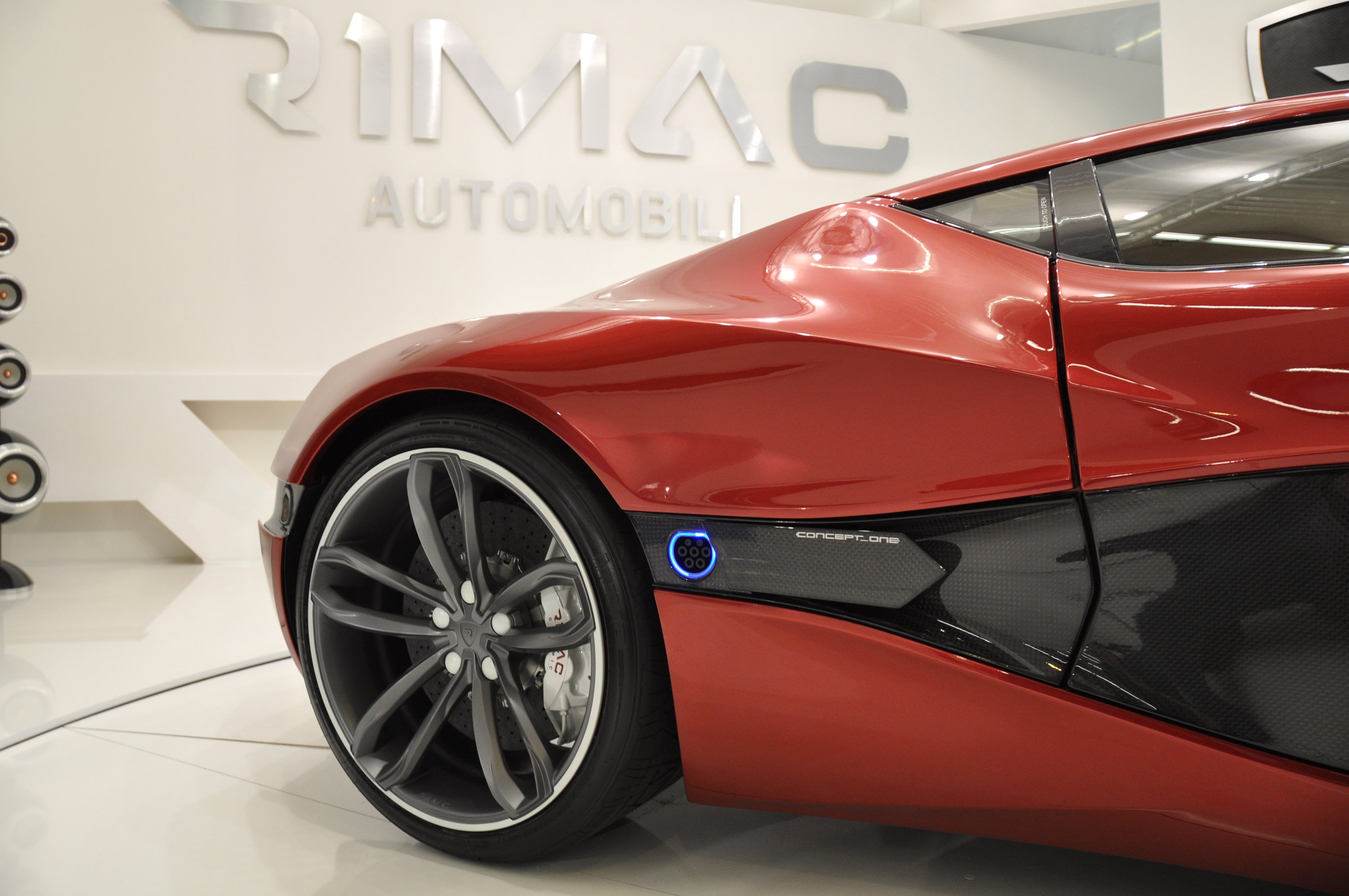 (CNN) – At full speed, the Rimac Concept_One is little more than a cherry red blur, flashing from one corner of the horizon to the other in the blink of an eye.

If its projected performance figures prove to be true, this radical electric concept car – the brainchild of an award-winning young Croatian designer – could accelerate faster than all but two of the fastest supercars on earth.

The Rimac Concept_One’s figures are impressive. Not just for an electric car, but for traditional gasoline-engine cars as well.

For years electric vehicles have been regarded as the frumpy inner-city siblings of their hardier countryside 4×4 brethren or zippier track-friendly supercar sisters. Electric vehicles have tended to have names like Leaf, Buddy or Spark as opposed to Vanquish, Venom or Phantom.

All this may be set to change when Rimac goes into production. First unveiled at Frankfurt Motor Show in September, 2011, the Concept One is an electric vehicle that aims to be even faster than the Bugatti Veyron. Its precocious 25-year-old inventor, Mate Rimac, says that the car produces 1018 horsepower, can accelerate from 0 to 100 kph in just 2.8 seconds, has a top speed of 305 kph, and can travel 600 kilometers on a single charge.

Mate Rimac says that he has always been motivated by the desire to demonstrate the superiority of electric over gas-powered cars: “I have two passions; cars and technology,” Rimac says. “Technology because Nikola Tesla was born in Croatia, and he invented the electric motor that is used in so many applications today. And I knew simply by theory that this motor is so much better to drive a car — even a sports car.

“I decided to combine my two passions, technology and cars and make an electric car that can prove the electric motor is much better even on the racetrack. Not just city cars for boring stuff, but to show people that the future will be interesting — that one day when petrol is gone and you only have electric cars in the world, you won’t have to compromise in terms of performance, speed or (how) far (it can go).”

While he was still in high school, Rimac bought a lime green BMW for less than €1000 and began modifying it with new parts. “I couldn’t wait to pull out (the motor) and put batteries and electric motors inside instead of the gas engine,” Rimac says. After several years of rebuilding and alteration, Rimac set a world record with his car, which became the fastest accelerating electric car in the world. The car is still recognized in the Guinness Book of World Records for the fastest quarter mile by an electric vehicle.

After setting five separate world records with his modified BMW, Rimac began to work towards building his very own car from scratch. He enlisted the help of the highly-regarded young car designer Adriano Mudri, and began work on the Concept_One.

Now Rimac is turning his dream car into a reality on a shoestring budget: “In the car industry, it’s common to design a new car with 1 billion to 5 billion dollars. But, most of those cars carry over components from previous versions — engines, gear boxes and stuff. We had to design a car (including) the whole technology under the skin, (while) the company itself didn’t have a desk to put a computer on. And we did all that with less than 0.1 per cent of the budget which is usual in the car industry,” Rimac says.

Preliminary impressions from the automotive press have been generally positive, although many, such as GTspirit.com, said that they approached the concept of a vehicle that has “no sound, no downshift and no smell of burnt petrol” with trepidation. Some also disputed the figures Rimac has released, suggesting that their projected performance statistics may be ambitious.

Still, the notion that an electric car might soon not just match, but outperform the best petrol vehicles on the planet is certainly a captivating one. When Rimac releases a production car into the wild in the not-too-distant future, the eyes of the world will certainly be watching.

By Arion McNicoll and Nick Glass for CNN